Like a mat of bacteria growing fuzzy on reliable feedstock, it sometimes seems like this industry thrives on imitation. But that’s only possible thanks to a rarer sort of game, those that step beyond assumed limits to create something truly unique. Thus the cycle perpetuates itself: imitation spawns innovation, which breeds further imitation. So shall it continue until sentient life is extinguished by atomic entropy.

Today is for the pioneers, those games that took a chance and, even if they were flawed in some way, managed to stick the landing. The year’s concept albums, in other words.

Deck-building on a map isn’t new, but Undaunted brings the connection between hand and table to new heights. Effectively, the units on the table are squads, while the cards in your hand are the individuals within those squads. Activation is as easy as playing a matching card, but taking a hit means removing a card from the afflicted squad forever — often a profound loss when the casualty occurs at a key moment.

The consequences of such moments are more than important game beats. As your units are thinned out, it’s easy to imagine your last few boys struggling to capture their appointed objectives. It’s a surprisingly effective — and affective — middle path between managing men and managing abstract groups of military units, establishing your perspective both on the ground and in the air. And although the Normandy incarnation of the game isn’t perfect, hopefully the upcoming Undaunted: North Africa will put the system through its paces.

Games about the ambiguity of language tend to plummet my mood into an existential crisis even as my mind revels in all the twisty wordplay. Wavelength delivers on both fronts. Unlike some of its more intimidating peers, Wavelength reduces the issue to one of scale. You’re trying to guess where a clue falls along a spectrum — between underpaid and overpaid, say, or between formal and informal. As the clue-giver, you’re constrained by where the scoring zone is located. High verbal IQ preferred.

Naturally, the humor arises with the ensuing debates. Being reminded that you don’t fully know what’s going on inside anybody’s skull, apart from being vaguely horrifying, is always a hoot. By making this process so approachable, with its five-second setup time and crazy easy rules, Wavelength shows off what you can do with a dial that would make Fantasy Flight blush.

Design and art by Prospero Hall. Published by Ravensburger.

Jaws is two games. I don’t mean that metaphorically, like saying, “Oh, there’s the game, but then there’s the mental game.” It really is two games. On the first side of the board, one player guides the shark to food-rich beaches (lucky!), while everyone else does their darnedest to preempt the shark’s movements and stick it with some tracker harpoons. With that out of the way, you flip the board for a showdown between man and beast, in which the shark tears the crap out of a boat while its crew throw everything they’ve got into the water in the hopes that something will draw blood.

What makes this such a treat, though, is the way the first game affects the second. The earlier the shark is detected, the more the crew is able to prepare. The same goes the other way, with chomped swimmers apparently bestowing wacky shark powers. It’s another grand slam from Prospero Hall, and also one of the greatest examples of how to adapt a film into the medium of cardboard and dice.

Not many designs are as rigid as Westphalia. Six people. That’s how many you’ll need. Not five, not seven. Don’t even joke about playing solo.

But the payoff is a game that does exactly what it wants with its demanded meatspace. As in, lots of loaded negotiations about debt. Playing as nations locked into two grueling wars — being named the Thirty Years’ War and Eighty Years’ War should clue you in to how badly they sucked — you’re determined to make peace, but also determined to get something out of all this bloodshed. Most of the time that means selling some troops to a rival, provided they pay the interest on those loans you took out five decades ago. Every side has their own interests, but the real draw is how they fare in collision. There’s nothing quite like it, and it wouldn’t exist without that initial devotion to making a game this tricky to table. 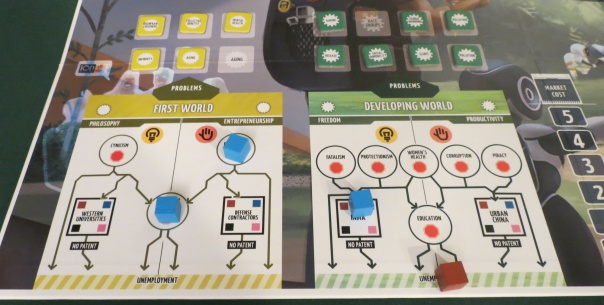 Every entry in the Pax Series plays like its own concept album, and Pax Transhumanity is no different. Here, though, the series steps away from its historical roots to tell the story of humanity’s steps from now to the singularity. Maybe. It’s also possible we’ll all live happily ever after in personal asteroid biomes. Or solve global warming as easily as reconstituting a frozen burrito. Or put the world under the thumb of the hellish megacorp that invented nanotechnology and germline genetic engineering.

Just as the previous entries have asked what if? about various flashpoints, this one crafts a work of future-history, asking difficult questions with answers that range from the uncomfortable to the inspiring. It isn’t often that board games produce genuine thematic statements, which makes titles like Pax Transhumanity all the more precious.

It’s easiest to think of Sabotage as a turn-based Captain Sonar about spies infiltrating a James Bond villain’s lair to deactivate doomsday devices. The spies rely on secrecy to keep their heads as they hunt for opportune moments to hack the offending equipment. Meanwhile, the villains bust out the heavy weaponry. Including cannons that unleash land sharks. Nom nom nom.

The breezy tone is only half of what makes Sabotage so joyful. Beneath that veneer resides a game that’s never content to call it a day. Every time you think you’ve got it figured out — “it” being that magical combination of the game’s systems and your opponents — something new splashes onto the scene to disrupt your plans. The result is both measured and madcap, deathly serious and hijinky farce. This is the direct opposite of elegant, but it has a grand vision, some insane ideas, and implements both with nefarious smoothness. Much like an actual mad scientist, come to think of it.

Which titles from 2019 moved the hobby forward for you?

Posted on January 2, 2020, in Board Game and tagged Best Week!, Board Games, Space-Biff!. Bookmark the permalink. 5 Comments.