← Everything but Luxembourg
Best Week 2019! The Inveiglers! →

Longtime readers may recall my appreciation for the solipsistic hellscape that is human language, the inefficient and ambiguous transfer of information generated by whistling air between slabs of meat, often followed by transcribing those whistles via pigment or pixels, and rarely wholly understood by those on the receiving end. Truly, we are the aliens. See also Dixit, Mysterium, and Codenames for a heightened sense of foreignness within your own skin.

This holiday season I’ve discovered a new inducer of existential angst. Co-designed by Alex Hague, Justin Vickers, and Wolfgang Warsch (best known for it’s-a-game The Mind), this one is called Wavelength. And when I’m pondering the Cartesian isolation of my reasoning mind from the remainder of this universe, my time with it has very nearly approached enjoyable. 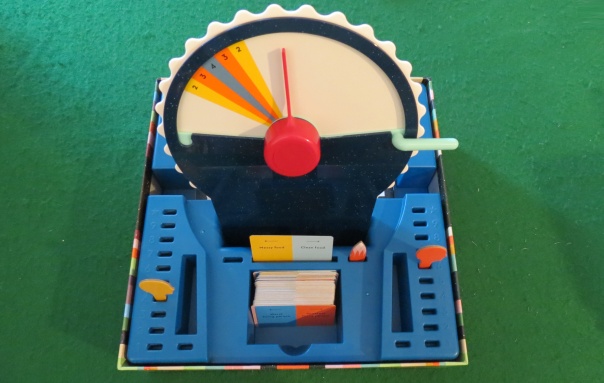 Wavelength takes about five seconds to set up.

Let me ask you a question. Say there are two prompts side by side. On the left it says Person you could beat up. On the right, Person who’d beat you up. Now, unless you’re Dwayne “The Rock” Johnson, you can probably rustle up a clue for both prompts. What do you pick? Personally, Vin Diesel. Easy. And Mr. Rogers for the second one, because he would defeat me with kindness.

Except now the screw turns. Instead of giving an answer for either extreme, let’s say you need to come up with something that falls in the direct middle. Or worse, three-quarters toward one side or the other. And you’re trying to get other people to guess your answer by pointing a dial at the correct spot on the scale while it’s hidden behind a blinder. What do you pick now, punk?

There you go. That’s pretty much everything you need to know about Wavelength to determine whether you’re the sort of person who would take it home to meet mom or break it to splinters against the wall.

Dials even Fantasy Flight would blush at.

What sets Wavelength apart from its cousins is that it’s very much a game about accuracy by degrees. There’s no need to land that dial on exactly the proper space. Proximity grants increasing points. Land dead in the center of the indicated zone and you get four points. Out at the edges, this decreases to three and then two points. The target zone is about a quarter of the play area, so it isn’t like your chances are terrible.

Except when people’s inane clues come into play. In the separation between Worst era to time travel and Best era to time travel, what does your friend mean when she says “medieval”? Like, which medieval? Early, high, or late? Is your friend a historian? Someone determined to finally employ those six semesters of Latin? An ignoramus laboring under the impression that the entire medieval period resembled the (admittedly crummy) 14th century? Or worse, are they doing something truly foolish by trying to appeal to your level of knowledge? As with all word games, sometimes Wavelength reveals more about you than comfort would permit.

And that’s before you throw in the competitive game. You really should. In this mode, the opposing team also gets a guess. This is as simple as a pencil marker. What does it mean? It’s a wager against how badly the other team has failed. By placing the pencil, you’re saying that you suspect the target’s center is on one side or the other of where the first team placed the dial. It’s a repudiation. “No,” it says. “The answer is over here. Only a fool in a sad hat and unflattering hosiery would guess there.”

As with many of the best solipsistic word games, the moment of the reveal is the ultimate highlight. It’s the moment that separates right from wrong, literary giants from midgets, and everlasting couples from future divorcees. There will be gutters of disappointment and titters of delight. Also deep shame as your friends browbeat you for thinking that clue could possibly point there.

Don’t mistake Wavelength for a mere party game. It is that, of course. A party game. It even reveals as much with its simple setup. Plug the dial into the box, draw a card, pass the whole apparatus to the current player. Easy. Nobody needs to read a script or close their eyes. Other than reminding your one friend that they can’t use bullshit clues like positions, percentages, or long explanatory paragraphs, it takes maybe a minute to explain.

But merely a party game? Never. This is the sanity-shredding abyss that peers back into your soul whenever you gaze past the edge of the flat disc of the world. This is the heaving disproof of scientific logic and the warmth of love alike. This is the nagging suspicion that there is a second world lingering out of the corner of your eye and behind the silver of every mirror, teeming with populations untold, all cackling as they pass in the busy night from one flame to another, shared as one flickering organism that burns even as it reveals the unhinged jaw into the realm where madness is reason and everyone speaks an incomprehensible babble whose meaning is as clear as a cavernous water.

Recommended for families and parties.

Posted on December 26, 2019, in Board Game and tagged Board Games, Palm Court, The Fruits of Kickstarter, Wavelength. Bookmark the permalink. 7 Comments.

← Everything but Luxembourg
Best Week 2019! The Inveiglers! →