← The Other C&C: Red Alert
The Somethingwreck Arcana →

Just when I thought I’d seen everything you could do with the humble battle line game — Schotten-tots, as I prefer to call them — Jon Perry decided it was a good time to drop Air, Land, & Sea in my lap. Rather than going big, bigger, or biggest, Perry has gone the other direction entirely, crafting a devious gem that lands plenty of punches with only 18 cards.

Six cards for you, six for your opponent, six sitting to the side.

Stop me if you’ve heard this one before. In the middle of the table are three theaters — air, land, and sea. Your goal is to control at least two of these three, accomplished by playing numbered cards and hopefully having a higher value in the relevant theaters when the dust settles. Those cards are jazzed up by their special abilities, which can result in smaller numbers trouncing bigger numbers. Nothing special, right? Exactly like half a dozen other great games?

Almost right away, Air, Land, & Sea starts ducking and weaving. Its first wrinkle is that each card is aligned with a specific theater. There are six cards for the sea, numbered one through six. Six more are landlocked. In the air? You guessed it. But rather than being purely restrictive, the game ensures you have plenty of tools to deal with a deficit in any given theater. It’s only natural that some of these tools are written as card abilities. Transport lets you move a card to a different theater. Air Support adds +3 strength to adjacent theaters. The Aerodrome lets you play cards numbered one through three into any theater. Simple but essential abilities that bend the game’s own restrictions.

More than that, any card can be played face-down. In place of its original value and strength, it’s now worth two and has no ability at all. That’s measly! Less than average! Why would anybody so callously reduce the potential of their cards? 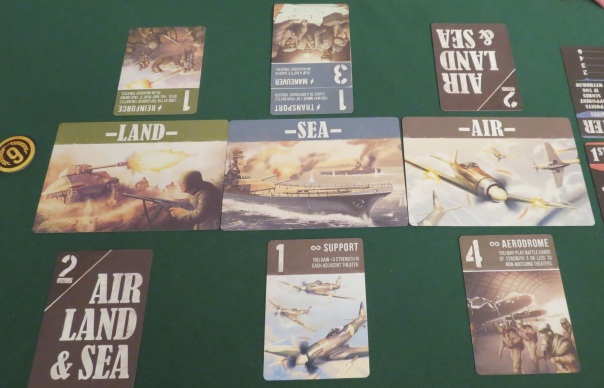 The answer to that question, like the answers to many of the questions raised by newcomers to Air, Land, & Sea, is subtler than it might first appear. There’s the obvious answer, which is that face-down cards can be placed in any theater. Starting with five naval cards no longer means you’re trapped on the seas. Two strength might not seem like a lot, but most theaters are won by slender margins. At the very least, a face-down card can force your opponent to invest a card of their own by nudging your strength over theirs in a contested theater.

Adding to this are other card abilities that leverage your face-down cards, sometimes to tremendous effect. Cover Fire transforms every card under it into a relatively tough four strength. Escalation does the same but for every face-down card you own, period. Redeploy even lets you take advantage of a face-down card by pulling it into your hand and letting you take an extra turn. Which means that by playing something face-down, you just forced your opponent to reveal more of their hand before your next big play. 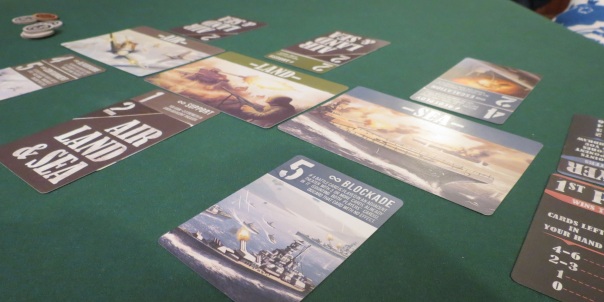 Card abilities can change the course of battle.

Going a little deeper, plenty of cards have been designed to flip other cards. Those beefy Heavy Tanks don’t look so impressive when they’ve been flipped thanks to an Ambush or Maneuver card. The wrinkle here is that only the topmost card in each theater can be flipped. That’s easy-bake tension, imbuing every card — and the order of your cards — with paramount importance. Should you disrupt your opponent’s Heavy Bomber by flipping it over, thereby dumping its whopping six strength to a piddly two? If so, your opponent might reveal a card that can flip it right back. Now you’re out a card and almost nothing has changed. But if, on the other hand, you elect to wait, they might stack a wimpier card over the top of their stronger one. Now you’re stuck with that Heavy Bomber hogging up the air.

This shouldn’t be mistaken for lack of consequence, where either move has an equal chance of being right or wrong. Rather, it’s consequence embodied. As you learn the cards and how to use them, making miniature wagers or bluffs or investments, gaining a sense for when to hold or when to push, that’s when every decision gains mass. This is possible because there are only 18 cards, only six combat values, only so many abilities. You know for a certainty that a six-value card will never have an ability, that an air-heavy hand grants flexibility while land troops disrupts the facing of your cards, that there are more tricks in each hand than are immediately apparent. That’s when Air, Land, & Sea comes to life.

Or at least that’s one of the ways it comes to life.

The most important card.

The biggest wrinkle of all is that each battle is only one phase of the larger war. Upon completion of a fight, points are awarded, the field is rearranged, both players are dealt a new hand of six cards — and most crucially, the first- and second-player cards are exchanged.

Most first-player components are a concession to convenience, some punched-out cardboard to remind everyone to take an equal number of turns. In Air, Land, & Sea, whether you’re first or second determines your entire approach to the battle. Going first means you win ties; going second means you’re always operating with a little bit more information than the other guy. Those are big deals, and still they pale in comparison to the last detail. Namely, that your turn order determines how many points will be awarded to your opponent if you withdraw from the battle.

It goes something like this. You’re two cards into a fight, your opponent plops down something nasty, and suddenly your hand doesn’t seem quite up to snuff. What’s a grown-up general to do? Here you’re presented with a decision: press on or withdraw. If the battle concludes after all cards have been played, the winner receives a whopping six points. But if you withdraw early, they’ll scoop a fraction of that. An early enough withdrawal might even result in as little as two points. That’s hardly anything for a new round with a fresh shuffle.

This is the strategic counterpart to Air, Land, & Sea’s tactical battles. Every minor decision is wrapped up within the reality of that larger context. Should you play this card or withdraw? Risk dropping down a “point level” to play your next two cards, or get out before increasing your opponent’s potential reward? Can your sure-thing approach be disrupted? Or should you soft-pedal your first few turns to draw your opponent into an ambush — and more points for you? Much like the deployment of each individual card, these are agonizing decisions, based on your knowledge of the cards, what you’re holding, and what’s already been played. It’s just enough to make an informed decision, but insufficient to operate with absolute certainty.

This card is my favorite because it’s a pun.

The result is a fiendishly smart game — and deceptive, given how its small format camouflages many of its best aspects. Like the best Schotten-tots, it rewards repeat plays and familiarity with its cards. Even better, it gradually reveals new ways to play. At first, you’re reacting. Soon you’re building combos. After a few games you’re measuring out each battle’s points, drawing your opponent into greater blunders, making strategic withdrawals. Fortunately, its tight focus on a mere 18 cards help those moments arrive quickly. It’s hard to think of many games of this stripe that are quite so subtle. Or as rewarding.

In other words, Air, Land, & Sea is proof that there’s more ground to cover with the Schotten-tot. Well done, Jon Perry.

Posted on June 25, 2019, in Board Game and tagged Air Land & Sea, Arcane Wonders, Board Games. Bookmark the permalink. 8 Comments.

← The Other C&C: Red Alert
The Somethingwreck Arcana →