Longtime readers may recall that I’m a bit of a snob when it comes to location-grabbing horizontal area control games, a.k.a. Battle a-Line-ks, a.k.a. Schotten-tots. Don’t know what I’m talking about? Why, none other than titles such as Omen: A Reign of War, Haven, and Air, Land, & Sea, all of which put their own spin on this simplest of genres.

Now I have a fourth favorite: Carlo Bortolini’s Riftforce. The trouble is that its spin is best expressed via numbers. 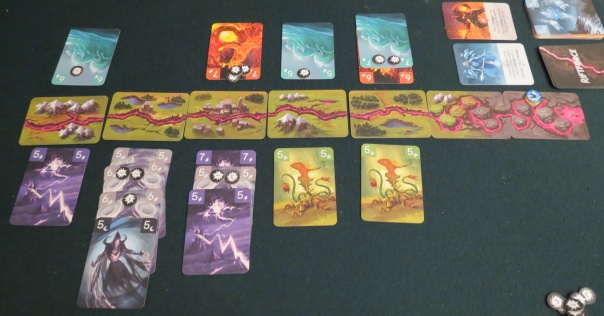 Welcome to the crib, fellow Schotten-tot.

Here are the basics, which will sound familiar to anyone who’s played Battle Line or any of its many successors. Across the middle of the table are five locations. These, of course, are the most important places on the planet. Controlling them means victory. Failing to control them means watching dejectedly as your rival ascends to godhood. Am I speaking literally? No idea. The fluff isn’t even slightly important. Generic fantasy nonsense. What matters is the game’s fine-tuned high wire act.

Specifically, Riftforce is about tending a deck of cards — here termed “elementals” — so they can stab, burn, electrocute, strangle, and drain the life force of your enemies. Did I mention that killing enemy elementals also awards points? I probably should, since it’s far easier to bump off a unit than to actually control any portion of the map for more than a moment. To recap: tend your elementals, kill the other guy’s elementals, maybe remember to control a section of real estate now and then. Got it? Cool.

Hand management features in all the Schotten-tots I mentioned earlier. When to play a card. When to hold. When to press an advantage with one of your chunkier units. How to shape your hand. It isn’t a minor feature, is what I’m saying. And still, “hand management” is what Riftforce takes and dials all the way up to a zillion. That’s because the actions themselves couldn’t be simpler, but they’re directly tied to what you’re holding, what’s on the table, and what will soon spill out of your deck. At the very beginning of the game, you draft four guilds. Each guild gives you nine copies of their preferred elemental, with the only distinction being that some have five hit points, a lesser quantity have six hit points, and a very few have seven hit points. This mix of integers is identical across all guilds.

Their sole difference is that each guild boasts its own power. If you’ve been playing board games for more than ten minutes, these are all bleedingly straightforward — so much so, in fact, that when I first opened the box and started going through the cards, I thought there must have been some mistake. Surely there was more to it than this. Every card deals damage. Some move before dealing damage, like the Water, Air, and Plant guilds and their attendant elementals. Others deal bonus damage based on special conditions. Two of the ten guilds award an extra victory point when — wait for it — enough damage has been doled out.

Of course, the simplicity is the point. For one thing, that game-opening draft only gives you four guilds. That’s four powers. Four simple powers, repeated nine times each, with slightly varying amounts of hit points. No combination feels the same as another, even with only one guild swapped out. Before long, they take on so much distinction that you’re looking back and thinking you were crazy to say they were all too simple, too similar. Water, Air, and Plant are nothing alike! Water deals damage, moves, and then deals more damage! Air moves and then deals damage to its location and the two locations next door! Plant moves enemies! That’s huge. Because like I said, Riftforce is about tending your elementals. But most of the time, they don’t want to cooperate.

This is where Bortolini’s amped-up hand management shoulders to the front of the crowd. There are only three actions, but all of them are directly invested in the state of your hand. The first puts elementals on the table. You can play up to three at the same time, but the hitch is that either their guild or their hit point number needs to match. Once they’re down, you can activate up to three of them for the low cost of a discard — although, again, the tossed card needs to match either the activated elementals’ guild or their hit points. Finally, you can refill your hand. This is more nail-biting than it sounds. First, because it’s kind of like skipping a turn, so it’s best to push your hand as far as possible before drawing. And second, because if you’re present at any location where your opponent is absent, you earn a point — but again, this generally means you’re yielding tempo, and keeping up the pressure is often more valuable than a point or two. Now that’s how you build tension!

I normally don’t like talking about specific actions, but the trio on display in Riftforce is a thing of beauty. Rather than treating its played cards as inert, their powers spent the moment they were slapped onto the table, Riftforce’s elementals practically vibrate with potential energy waiting to be unleashed. Only one type does anything the instant it’s played, and that’s to deal a measly one point of damage; the rest require later activation.

But doing so requires such delicacy! Whether you’re deploying elementals or having them slug their peers, the cards in your hand are as much active participants as those already on the field. The result is a game strewn with traps. Hands pushed to their limit before drawing. Elementals deployed and activated even when you can’t quite get three of them out at once. Junk hands that are still somehow bent to your advantage. At times it feels almost like a puzzle, forcing you to squeeze a few drops of blood from each set of cards. Other times it deals you the best hand imaginable, only to force you to endure after a particular supply has dried up.

In both instances, every detail feels perfect. Even the careful balance of integers between five, six, and seven hit points. When I first sat down to write this review, I gabbed about the precision and balance of those numbers for far too many words: How they’re neither too low nor too high. How a seven-strength elemental feels genuinely oppressive. How uncommon it is that I get excited about math.

Your combination of powers can lead to unexpected results.

As a genre, this style of location-grabber has always carried itself with an understated elegance. Riftforce takes that elegance and shoves it out into the spotlight. It’s a game with no easy answers, no obvious moves, and yet, somehow, a high ceiling for how much control it yields over the outcome of any given match. With so few powers per game, winning isn’t about learning card capabilities so much as mastering how to use them creatively, tactically, in the moment, while also keeping an eye on how you’ll make do once the current play has run its course.

What a delightful surprise. One of my favorite styles of play, and Riftforce has shown me a whole new way to think about a battle line.

Posted on October 26, 2021, in Board Game and tagged 1 More Time Games, Board Games, Capstone Games, Riftforce. Bookmark the permalink. 7 Comments.