Forward to the Past

There’s an old adage I just made up about how you shouldn’t play a favorite designer’s games in reverse, as the process will only result in disappointment. After being totally smitten by Jon Perry’s Air, Land, & Sea, I was immediately drawn to his previous game, Time Barons. Perry co-created this one with Derek Yu, whose name you might recognize from I’m O.K., in which you murder and urinate on video game designers in order to poke fun at anti-game crusader and huckster attorney Jack Thompson. If only Yu’s lesser-known Spelunky had been his defining work instead.

Anyway. I’m happy to announce that my old adage isn’t worth beans. Time Barons rules. With some considerable provisos.

The key to success: population.

It almost goes without saying that there are layers to what we call “theme.” Partly that’s because our hobby can’t figure out the difference between a subject, a setting, and a theme, but that’s a topic for another day. In the case of Time Barons, its uppermost layer is right there on its sleeve. You’re a time baron. There never was a time baron who didn’t get up to no good. Therefore, you’re about to pull some shit. It’s as reliable as one and one making four, which only makes sense because you went back far enough to strangle Old Man Arithmetic in his crib.

Thus, the setup. Each time baron begins with a capital and ten followers. In the center row there are four decks, each representing a new era of human advancement. At first glance it even bears a passing resemblance to Temporal Odyssey, with that game’s past, present, and future decks. Now subtract the eldritch weirdos, wackier excesses, and the entire comparison. Time Barons is built of plenty of familiar elements, but they combine into something that not even its closest cousins resemble.

If anything, its closest relative would be a civ-building card game, albeit one that produces decidedly unstable empires. Picture Innovation and you’ll grasp the spirit of the thing, if not any of its feeling. Every turn provides three actions, spent on some combination of playing cards, drawing cards, upgrading so you can draw better cards, or probably playing a different card. Oh, and there’s some population-building and population-moving in there as well. That’s the goal, you know. Lose all your followers and you’re kaput. Kill your rivals’ followers and you’re made ascendant. As everybody knows, time barons derive their power from the adoration of their subjects. As a result, you’ll do plenty of things that don’t put time itself through the taffy puller. As sexy as it might sound to catapult yourself into the age of genes and atoms to field some literal mind control, it pays to build churches and seed farms.

But we’re getting ahead of ourselves. Let’s go back a bit. 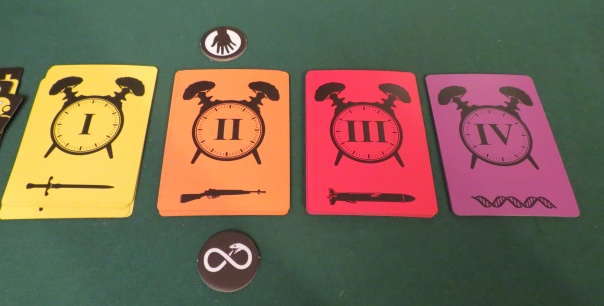 It goes like this. Like I said, you have ten citizens dwelling on the relatively firm ground of your capital. By which I mean your capital can absorb eight hits before it detonates instead of the usual three. Therefore, your first goal is generally to spread around your people by plopping down new sites and redistributing your population into a safer spread. Churches and missions can generate new followers, while forts both introduce a onetime burst of immigration and protect your people from harm. A catapult can begin to plink away at your rival’s bases, while a temple lets you sacrifice a citizen for an extra action. All are useful in their own ways.

But don’t go thinking you’ll find any stability, even early on. That first deck is packed with threats. Sieges for breaking apart your structures, plagues that slowly drain population, fanaticism for sacrificing three guys to deal three damage — not such a bad trade if you manage to scuttle a site where an entire clutch of enemy citizens has taken refuge. The point is, your first casualties might roll in before your first turn. Certainly you’ll be hemorrhaging population by the second or third.

This is where Time Barons comes to life. Right from the get-go, you’re forced to adapt or die. And there’s an apparent way to do that, arranged in a line on the table.

Each successive deck makes the previous one look paltry. At level two, modern medicine saves half of your casualties, libraries bestow free cards, and sniper nests prevent your rivals from rearranging their citizenry without taking casualties. At level three you’ll be able to automate a site, effectively erasing any need for your followers to operate it, or utilize mass media to indoctrinate opposing citizens, or unleash horrifying bioweapons that kill a citizen for every card a rival has hoarded. Level four has a card entitled “doomsday laser.” That should pretty much tell you what to expect at the topmost branch of the tech tree.

This process of climbing through the upgrades is much of the joy of Time Barons. There’s a hefty element of chance at play, but that sensation of uncertainty is the dizziness of discovery. Now that you’ve upgraded to level three, will you draw a missile silo for targeted damage, or a robotics lab for an extra action each turn? This becomes more pointed as everybody at the table learns the cards over multiple plays, transforming an opponent’s hand from a total unknown to a semi-known, a range of possibilities, a hint of what they might be able to accomplish. When your opponent cashes in their alien monolith to draw from the final deck, will they reveal a brain emulator that boosts their population by insane quantities, or a rinky-dink replicator?

But this process works precisely because it isn’t always obvious. Like many of the game’s best cards, an upgrade requires multiple actions. At the highest rung, it costs more actions than you normally receive in a turn. Are you willing to effectively skip a turn in order to draw better cards later? If you’re under pressure, it might be better to bolster your defenses with new followers, erect a tougher site, or launch a preemptive attack. It helps that earlier buildings tend to be foundational, whereas later ones become more specialized. Need an infusion of followers? Nothing is quite as reliable as a plain old church.

This is classic tension, forcing players to weigh their current needs against their future potential. And the decision teeters on a razor edge precisely because your balance is so easy to destabilize. Not until the last card will you know whether the long train of your choices were mostly errors or tactical genius. More likely, they were at least seventy percent dumb luck. Go ahead and blame those rotten draws. The deck doesn’t mind.

The hammer and forge make the free-for-all functional.

Perry and Yu seem to have been aware of their game’s reliance on deck-diving and a whispered prayer to the dodecadeity. As far as I can discern, their answer was twofold.

First of all, too bad. If you can’t handle a game that’s almost purely reactive, with only occasional considerations beyond which site will survive now, which followers can be squirreled away this turn, which cards can be leveraged as soon as possible — well, then Time Barons won’t work for you. Where Perry’s later Air, Land, & Sea has been compressed and honed until it’s as hard and sharp as an industrial diamond, Time Barons is hearty slop, crammed with enough nutrition to feed a dozen hogs but also liable to get your rump muddy. One is there to be mulled over. The other is for laughing about how your opponent placed a sentient A.I. in command of a missile silo to eradicate two foes in a single action. It’s rare that deep games provoke laughter. Time Barons doesn’t try to be both.

At the same time, however, there are a few breadcrumb concessions to our human need for control. The decks themselves are largely balanced, with every card at least providing a useful advantage to some strategy, if not the one you’re pursuing. As before, this becomes tighter with more plays, and again as you move between the starter and expert decks. Good thing the process of learning the decks is made so easy by the game’s setting of inevitable apocalypse.

As a further concession, free-for-all games are reined in by the hammer and the forge. Rather than have everybody gang up on the weakest player, Time Barons awards a magical time-hammer to anyone who attacks the previous hammer-holder. You’re still allowed to pester anyone you please — Time Barons isn’t restrictive enough to badger you into any particular target — but holding the hammer slowly builds up weapon tokens on your forge. After a while, you can exchange these tokens to attack everybody at once to the tune of three damage. If you haven’t been paying attention, that’s massive. Certainly it’s enough that clever barons will do everything in their power to ensure that no one person sits on the hammer for long.

As such, attacks are often spread around naturally, letting everybody survive for at least a few rounds. Same goes for the more restrained (ha!) two-player game; with more breathing room, you’ll stick around long enough to tug on a few strategic threads. If you go in expecting that a few will be frayed at their far end, you’ll be inoculated against becoming too frustrated.

Still, it’s undeniable that frustrated plans occupy a core position here. At its best, Time Barons is a hoot. Sometimes on purpose, sometimes in spite of itself. In both cases, it comes across as deliberate, a wild project filtered through appraising minds, both trash and clockwork at the same time. Depending on how you feel about extreme luck of the draw, it will prove a familiar disappointment or a familiar delight. In my case, it’s darkly humorous enough that it steps into the latter territory despite the occasional infuriation. My approach was ironclad, dammit. If only my opponent hadn’t drawn that air strike.

I’ll put it this way: if you want a good laugh, play Time Barons. If you want Perry at his sharpest, give Air, Land, & Sea a shot. While my old adage didn’t prove entirely true, there’s still a kernel of truth to be found at its center.

Posted on August 8, 2019, in Board Game and tagged Board Games, Time Barons, WizKids. Bookmark the permalink. 7 Comments.