One More Reason to Love Dominions 4

I love Dominions 4. It’s the sprawl of the thing. The thousand thousand units, spells, magic items, deities. The expansive mythology. The steady build from small armies supported by a little bit of magic to massive armies that exist only to protect wizards who cast world-ending doomspells. The fact that I’m running a 13-player, 15-AI game that will likely last over a year and generate stories I’ll remember for the rest of my life — and yes, I’ll also report the whole thing here once the game is done and nobody can use the writeups to suss out my team’s strategies.

Today though, I found one more thing to love about Dom4. You can find it after the jump — though be warned, what follows contains about 85 pixels (no, I didn’t count) of Not Safe For Work thanks to some mythological nudity.

END_OF_DOCUMENT_TOKEN_TO_BE_REPLACED

Dominions 4. If you’ve played Dominions 3: The Awakening, the mere mention of another entry to this utterly unique series should send shivers down your spine. If you haven’t, then… well, this article might not be for you. In that case, I recommend getting up to speed with my game diary RPS Ascension, or maybe taking a look at some articles I wrote about one of Illwinter Game Design’s other titles, the similar-yet-distinct Conquest of Elysium 3.

Returning to those of you who know exactly how remarkable this series is, today we’re going to walk through my first match, and take a look at a few of the ways Dominions 4: Thrones of Ascension is refining its own formula.

END_OF_DOCUMENT_TOKEN_TO_BE_REPLACED

Everyone knows that videogames are murder simulators. Why, just earlier this week, Far Cry 3: Blood Dragon was teaching me how to take down 1980s rogue cyborg armies with a laser machinegun, and later that evening I put my skills to use by transforming into a gun-slinging vigilante who single-handedly cleaned up Salt Lake City before dawn. Weren’t no thing at all.

The one downside is that while a handful of hours of mouse-clicking will transform even the mildest-mannered child into an ultra-aggressive and super-competent killer with skills on par with the years of training required to be a special forces operator, even the manliest nerd might find it hard to perform those firearm actions not modeled by most videogames — such as how to manually fill and then load a magazine, manipulate the slide, check the chamber for a live round, and disengage the safety, among other skills.

END_OF_DOCUMENT_TOKEN_TO_BE_REPLACED

A Valley Without Wind 2: Panic in the Ranks

Spike Ayleward was feeling pretty sure of himself when last we saw him. Sure, Demonaica was about to burst out of his dark ugly Keep and wreak hell upon the meager Resistance, but Spike had done his best to grow outwards in every direction, breaking down Windstorm Generators and installing fighters in the most secure locations. The Resistance had a tidy stockpile of food and scrap, morale was high, and Spike’s own powers weren’t looking too shabby now that he’d recovered the lost art of being a Staminist Mage.

Little did he know that Demonaica was feeling pretty sure of himself too. And with better reason.

END_OF_DOCUMENT_TOKEN_TO_BE_REPLACED

A Valley Without Wind 2: Before Demonaica 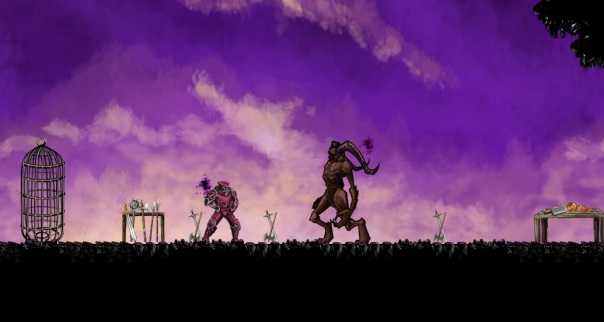 As a big fan of Arcen Games, I’m mildly ashamed I never played the first A Valley Without Wind. Unfortunately, not too many other people did either, and quite a few who did apparently didn’t think much of it. Now the developers have released the sequel, and in a staggering display of good faith, have released it for free to anyone who purchased the original, promising tighter controls, more comprehensible systems, and — since this was a huge sticking point for many people — improved visuals. And by all (trusted) accounts, the improvements haven’t been for naught.

Well, that all sounds great to me, so I’ve decided I’m not going to miss out on yet another of Arcen’s games. I’m jumping in with both feet, sink or swim.

END_OF_DOCUMENT_TOKEN_TO_BE_REPLACED

I need to ask you something. Back when I was telling you about Clements and I mentioned that this is the story of how I died, did you really believe me? Or did you assume I meant something metaphorical, like how I died on the inside? Because I can see how you might think that, considering what I told you about that mine shaft incident, because, sure, that slayed a ventricle or two. Or you might think that I’m in the process of dying right now as a result of everything that went down over the last few months, bleeding out while I stammer my story on the side of the road, imparting dying wisdom to a younger version of myself.

But I’m not. I’m dead. El finito, as the Italians say. This is the story of how that happened. It was horrible and painful and more than a little embarrassing. And baby, it wasn’t dysentery that did me in. So settle in and get ready to hear the long and short of it.

END_OF_DOCUMENT_TOKEN_TO_BE_REPLACED

Once we’d sorted out the seating assignments for the station wagon (if you don’t remember how that happened, your memory is almost as short as Clements is now), it was time to hit the road, just like I was Jack Kerouac, and Somerset, Pariah, Wedge, and Agent Five were— well, like they were whoever traveled with Jack Kerouac. Of course, since the radio was dead we had less Jazz, and none of us were much inclined towards reciting what scant poetry we could remember or make up, and Agent Five had already consumed all the psychotropics on account of the zombies. All right, I suppose it wasn’t much like On the Road after all.

Even so, we were united by a quest: Clements might have been an old basket case, but his dream of a safe haven on the West Coast was as good a fantasy as any. And if you’re thinking we should have sat pretty and waited for someone to save us, well, you’re probably right. Since I’m dead and all.

END_OF_DOCUMENT_TOKEN_TO_BE_REPLACED

The Organ Trail, Part One: Clements

Alright, let’s get the clichés out of the way right now, shall we? Yes, this is a zombie story. Yes, it’s also the story of how I died — is there any other type of zombie story, when you get right down to it? And yeah, I’m not too chuffed about the whole debacle.

Why not? Because it’s the story of how I died. I mean, come on. How can you expect someone to have fun with that sort of thing?

END_OF_DOCUMENT_TOKEN_TO_BE_REPLACED

I don’t know if there’s a name for that type of question that members of the same generation ask each other — things like “Where were you when JFK was shot?” or “when Sputnik went up?” or “when the Wall came down?” — ones that give folks a feel for each other, that establish they’ve lived through the same tragedies and triumphs, like a person’s rough backstory is encapsulated in the answers. I like those questions. Sometimes it’s good to know we come from the same place.

I came along too early for my question to be about 9/11 and too late for anything with Cold War flavoring. “Where were you when Clinton was re-elected?” doesn’t have much ring to it, though I can answer it (kitchen). I’m having a hard time thinking of anything else I could use. Oh, maybe Clinton’s impeachment. I was in the kitchen for that too.

Anyway. Here’s my question, and you’re going to think it’s a joke but it’s not. I’m completely serious, because for me this moment was like a warehouse light getting switched on, revealing aisle after aisle of potential, and I realized: “Computers. We are going to do stuff with these.”

END_OF_DOCUMENT_TOKEN_TO_BE_REPLACED

I imagine that when our primitive ancestors (I’m on some sort of caveman kick this week, aren’t I?) first discovered fire, the scientific method was invented right alongside it. Having made fire (or captured it from some other source, maybe by carrying a burning stick from a forest fire or a lightning strike or something), and hopefully having figured to ring it with stones or keep it away from dry brush, the first thing I assume they did was try to figure out what to chuck in it. Certain things worked — dry sticks, grass, furs (“Thanks a lot” grunted the one whose furs they’d tossed in, and thus sarcasm was invented too); others resulted in less pleasing effects — water, boulders, mastodon dung.

Little Inferno from Tomorrow Corporation, which consists of the same indie darlings behind the much-lauded World of Goo, deals largely with that lizard portion of our brains that compels us to acquire stuff for the sake of burning it up. Literally. Like with fire, not metaphorically. But does the game itself burn bright, or burn out?