Once we’d sorted out the seating assignments for the station wagon (if you don’t remember how that happened, your memory is almost as short as Clements is now), it was time to hit the road, just like I was Jack Kerouac, and Somerset, Pariah, Wedge, and Agent Five were— well, like they were whoever traveled with Jack Kerouac. Of course, since the radio was dead we had less Jazz, and none of us were much inclined towards reciting what scant poetry we could remember or make up, and Agent Five had already consumed all the psychotropics on account of the zombies. All right, I suppose it wasn’t much like On the Road after all.

Even so, we were united by a quest: Clements might have been an old basket case, but his dream of a safe haven on the West Coast was as good a fantasy as any. And if you’re thinking we should have sat pretty and waited for someone to save us, well, you’re probably right. Since I’m dead and all.

But enough about hindsight, let’s get back on track. The first order of business was to study the map Clements had left me by dying with it in his jacket pocket. It outlined a route to the Coast, hitting every major landmark and city along the way. I wasn’t certain it was up to date, or had ever borne a passing resemblance to accuracy — for all I knew, Clements had made it all up; it wouldn’t surprise me if he had — but we figured what the hell and drove off into the sunset. In the direction the sunset would be in a few hours, anyway.

Since I wasn’t Clements and was only in the habit of drinking on odd-numbered days, the start of our little road trip was uneventful enough, no steering into trees or contracting dysentery this time. We made it about halfway to the first stop on the map in one long drag, and pulled over to rest for the night.

Now, I want to make it clear that I wasn’t a survival expert or anything. My bringing more cubic footage of bullets than food should have tipped you off, but in the event you’re dense I’ll make it eminently clear: I’d never needed to survive a thing in my life. My parents paid for my college education. I was given a job running the counter at my grandpa’s shop. Somerset and I lived in her mom’s basement. When it came to figuring out how to make ends meet, it’s fair to say I lacked in experience. So when we realized, gathered around our little campfire (I am not going to tell you what a debacle that was to get started), that we were basically already out of food, everyone’s tempers were more than a little unjustified. How could I have known that we probably wouldn’t ever need a spare muffler, let alone two? The only thing I knew about mufflers was that the man who checked my emissions was mad I didn’t have one, and when something like that happens at the age of sixteen, you remember it.

They said it was my mistake and therefore my responsibility to forage for food. I argued I’d been driving all day, and had been the one to scavenge supplies in D.C. for twelve hours before that, and even earlier I’d been in a car wreck with Clements and expected him to turn into a zombie and eat my brains, so I was running on maybe a single restless hour of sleep over the last couple days. They were quiet for a bit until someone pointed out (in a voice like he was in a parliament debate) that I’d left them with Clements while I went scavenging, so really I was the one who’d had a break. They all chimed in on that point, so I took the gun and went out to the forest and found a heaping bag of groceries and got mauled by a zombie (but not bit) and came back ragged and bloody and expecting an atom-bomb of an apology, but everyone just ate some of the food and then went to bed, leaving me feeling like a gift horse that had just been to the dentist.

If it feels like I’m abbreviating a story there, I just might be. Truth is, it was a bit of a blur — all I know is that I was beginning to question my traveling companions’ dedication to getting to the West Coast. At this rate, it would be a miracle if we even made it to Pittsburgh.

That’s what I thought at the time. It was mostly a straight shot. I’d like to say we were succumbing to infighting by then, but other than me feeling a bit sore about the night before, things were pretty much fine. We stopped by an abandoned car on the way, but there was nothing inside. A little later, Wedge announced that he was really, really tired. We all looked at each other and shrugged — who wasn’t? Shrugging in time made us laugh a bit. We were probably suffering from some sort of exhaustion-dementia, though I guess we also felt good about the prospect of trading for more food in the city, especially since the survivors there seemed approximately as well organized as the place had been before the living dead.

We decided to linger among the other survivors for a day or so, even though some of them were super shady, and I did something I’d never done before. Which isn’t to say that was uncommon, considering how I was killing a lot of stuff recently and I’d never driven a car so far in one sitting or eaten from a bag of groceries that I’d found in the forest. When I say it out loud, this was probably the least radical “something new” of my whole story, but it felt completely different, like— Fine, never mind, I’ll just tell you:

I went out and found a job. 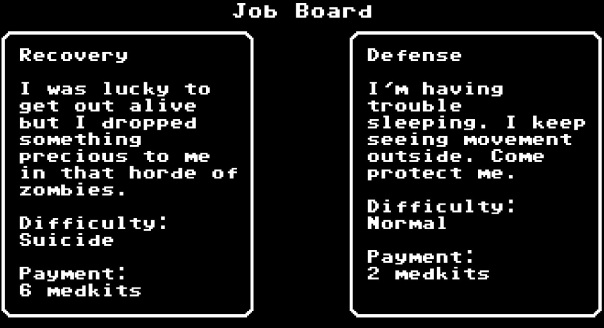 Right in the center of the survivor haven someone had put up an old chalkboard for people to write down tasks they needed doing. It seemed like a smart idea at the time, though it turns out that everywhere we went someone had thought up the same thing, so either lots of people are smart or I just think normal ideas are a lot cleverer than they really are. Since around 90% of the population of Pittsburgh had been zombified by that point (that comes to roughly 276,000 zombies, which doesn’t sound like that many until you’re crapping your pants running from four of them), most of the jobs revolved around zombie removal. The first one was from a gentleman who had dropped something beyond the wall that separated breathing humans from human-eating undead humans, and the prospective employer had been kind enough to list the task of recovering the item as “suicide.” Thanks, but no thanks.

The other offering sounded more reasonable: someone had heard a few obnoxious noises outside their abode, and wanted a night’s protection. The offered reward was two medical kits, and since I didn’t want to explain to the group why we didn’t have bandages or aspirin once someone got hurt (or Imodium when they got dysentery), I took the job on the spot — which entailed walking over to where the job was actually being offered and accepting on that spot.

Want to guess what the noises were? If you picked zombies, you’re right.

While we’re guessing stuff, I have a wager for you. If you can guess how I died, you win. I don’t have anything to offer in the way of a reward, since I’m dead, but it’ll spice things up while we we wait for everyone else to join the dead too. To make the game more interesting, I’ll give you a hint: If you picked zombies, you’re wrong.

The job ended with me killing a handful of zeds that had lodged themselves behind the old man’s house, and two medkits richer I returned to the group. I have no idea what their contribution was during this time (probably “bartering”), and I decided to let it go for the time being. So we all jumped back in the station wagon and hit the road. 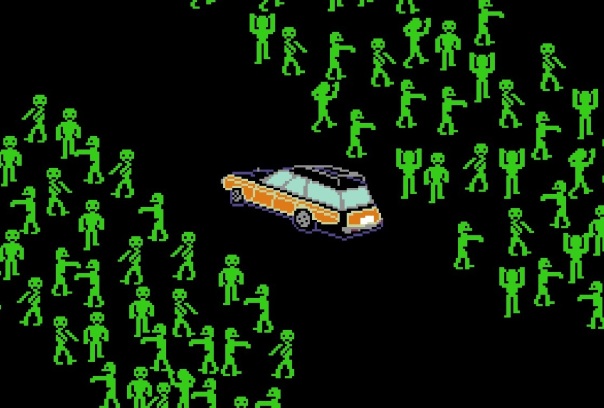 Or we would have, had there not been a horde of zombies on the road. They seemed agitated (or so Wedge said; Zombies always look agitated to me) so we waited a few hours, alternating naps, until the crowd calmed down enough for us to drive slowly — and quietly, thanks to a certain someone with a certain respect for the power of mufflers! — right through the middle of them. As far as we were concerned, that horde was Pittsburgh’s problem now.

Our problem was that Pariah suddenly announced he had Typhoid, which is pretty damn gross if you know what causes Typhoid. “What have you been licking this time?” Somerset shouted, which was altogether much more information than we needed at the time, and resulted in Agent Five making us stop so he could vomit into a bush for an hour.

While most of the members of our little group tended to each other with one of the medical kits I’d brought back, I went off exploring with Wedge. This turned out to be a stupid idea once we found ourselves in possibly the most contrived moral quandary I’d ever encountered.

See, a short ways off the road was a mine, and when we heard voices shouting for help from inside one of the two shafts, we ran over to investigate, and Wedge fell down one of them. “I’m trapped,” he shouted up to me. “You’re going to have to figure out a way to get me out!” I checked the other shaft and discovered a family at the bottom, complete with women and children. “Thank God!” shouted their leader, who was also the father of the little clan of five. “There should be some explosives up there. If you toss them down the other shaft, we should be able to climb out over the rubble.”

“What on earth?” I shouted back. “What about rope? My friend’s in the other tunnel. Isn’t there a rope?”

Well, what would you do? I ran around for an hour looking, but he was right: this particular mine had nothing in stock but dynamite. When I returned and told him he’d been right, he pulled his daughters close and squeezed them tight, probably trying to emotionally manipulate me into saving them over my friend.

I sure showed them.

Wedge climbed out easily enough, and although he was pretty happy with the solution and had all sorts of gratitude to offer and kept saying I’d made the right choice, I found it hard to look him in the eye for the next few days.

Well. That’s that. I wish I could tell you that was the worst decision I made between that point and my death, but it isn’t. I’ll have to rest a bit before I get to that part though.

Posted on January 18, 2013, in Game Diary, Indie and tagged Indie, The Men Who Wear Many Hats, The Organ Trail. Bookmark the permalink. 3 Comments.