← The Half-Clockwork, Half-Human Merv
His Glory Shall Be Dung and Worms → 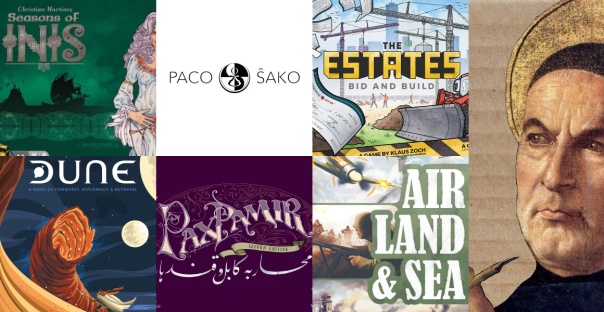 The three best games of the year were absolutely Seasons of Inis, Pax Pamir, and Air, Land, & Sea. From best to bester. In that order.

I mentioned on the first page that I’d received what I would scientifically label “guff” about two games. Putting AL&S ahead of Pax Pamir was the second instance. Let’s agree that rankings are as stupid as they are fun. Just because Air, Land, & Sea is a perfect game — a perfect game that has an “updated” second edition, how do I like them apples? — doesn’t mean that I don’t also love Pax Pamir, or that there aren’t situations in which I would rather play one over the other. Do you people rank your children? Sure you do. But you still love them all, right? This is like that. So quit grousing because a near-microgame happened to be better than one of the best games ever made. Sheesh.

Also, Paco Sako and The Estates are fantastic. Everything on this list was fantastic.

Dune is too long. That’s all I’ve got.

Posted on February 25, 2021, in Board Game and tagged Best Week!, Board Games, Retrospective, Space-Biff!. Bookmark the permalink. 20 Comments.

← The Half-Clockwork, Half-Human Merv
His Glory Shall Be Dung and Worms →