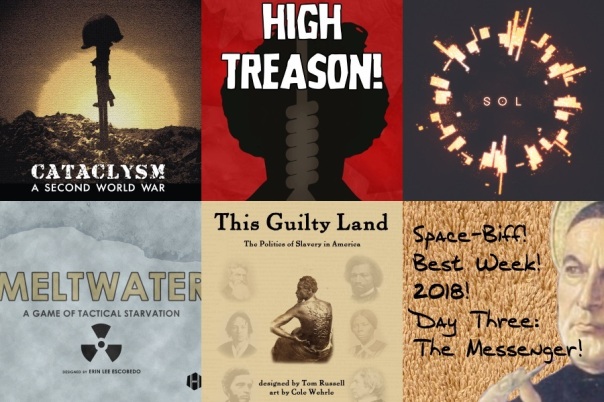 Sometimes I’ll revisit my own articles, usually to see how my thoughts have developed or if there’s something I missed at the time of writing. This is an exercise, not a pat on the back, and it helps me frame my thinking. That said, there were two articles in 2018 that fill me with a deep satisfaction, both because I was privileged to play such insightful games and because I’m relieved I was able to express what they meant to me. Those games were Sol: Last Days of a Star and Meltwater. If those were the only things I got right in 2018, they would have been enough. I only regret they didn’t inhabit the first two slots.

To a lesser extent the same is true of This Guilty Land, although I don’t believe it hangs together as well as a play experience. At least they all found their way into the top three!

I wouldn’t say I got High Treason “wrong,” although it’s a system I want to see developed further — and that was the plan until Victory Point Games was smothered to death. Cataclysm was also a good game, but I won’t be playing it again; there are too many exceptions and fiddly parts, which is something I’m trying to be more critical of in wargames. It probably wouldn’t be enough for me to dampen my praise, but make the caveat more plain? Sure.

Posted on February 18, 2020, in Board Game and tagged Best Week!, Board Games, Retrospective, Space-Biff!. Bookmark the permalink. 8 Comments.