February traditions are important. Much like the lesser-known Presidents’ Day (the third Monday) and the Hallmark Greeting Card Company Annual Earnings Holiday (the 14th), the Space-Biff! Retrospective is our chance to revisit nominations of years past and see how they held up. It’s also a chance to see me cop to the mistakes I made along the way! Surely you’re here for the first reason. 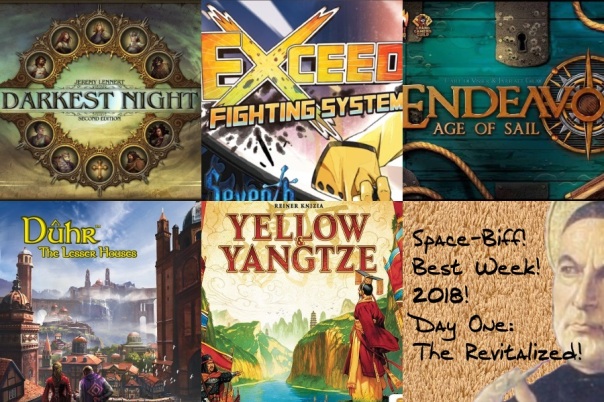 Day One: The Revitalized!

More seriously, literally everything. There isn’t a stinker among these picks, and I’m still playing most of them a year after the fact. This was probably an easy list for two reasons: first, because these are all remakes or new editions of games that deserved the attention, so they weren’t bad to begin with; and second, I made the call to feature fewer titles for Best Week. It’s far easier to correctly pick the best five games in a category than the best eight or ten games. This streamlining continued in 2019, and will continue in the future.

The most storied title is Exceed, which accompanied me on a medical trip to El Salvador and saw a number of plays in a run-down retreat for priests. Darkest Night is still available, despite being collateral in Victory Point Games’ decapitation at the hands of Dan Yarrington’s Tabletop Tycoon. Endeavor: Age of Sail got a Kickstarted expansion. Yellow & Yangtze proved distinct enough from Tigris & Euphrates to warrant a top place in Reiner Knizia’s oeuvre. And although it was pretty much review-bombed by people who didn’t understand how to play it, Dûhr: The Lesser Houses still gets everyone in my group yawping dur dur dur every few months.

Ah, you skipped down here hoping for confessions of wrongdoing on my part. Unfortunately, there was nothing wrong with this category’s picks. Everything was right. Sorry.

Next up, I get something wrong.

Posted on February 18, 2020, in Board Game and tagged Best Week!, Board Games, Retrospective, Space-Biff!. Bookmark the permalink. 8 Comments.