Jim Felli always brings me the very weirdest stuff. Remember Zimby Mojo, the game about cannibal tribes warring over a magical crown? You would remember. It was crazy.

Bemused is slightly more muted, if only because it doesn’t see you transforming your tribesmen into hulking zombies. Instead, you’re a jealous muse who can drive your rivals’ artists insane, return your virtuoso from the dead to haunt those who killed her, and generally sow dread and doubt rather than actually, y’know, making art.

You can’t tell me this doesn’t look fantabulistic.

Whenever I sit down to teach a game, almost the first thing I explain is how you win. “You earn points by making train connections for your Florentine prince,” I’ll say. Everything that follows, all the little rules and exceptions and corner-cases, the iconography and vocabulary and phases, are now just the steps you need to take to accomplish your goal.

In Bemused, when someone asks how they’re supposed to win, my answer is pretty much, “We’ll get to that.”

Here’s what you’re looking at when the game begins. You’ve got your virtuoso, the sassy gal or pal who you’d very much like to become the artist of the century, remembered alongside Mozart and Caravaggio and Billy Joel. They have a gemina, another artist at the table who inspires them, drives them, or maybe just annoys them like a mosquito that won’t stop batting against your eyeball. Oh, and they’ve got a secret. But hold onto that thought, because we’ll talk about secrets later.

Once you’ve got your virtuoso and hidden gemina and secret, you’re also given a hand of cards. Most of these represent doubt, little barbs you can burrow beneath the very thin skin of your rivals. Pass out enough of these to an artist and you might drive them to insanity. There are also dread cards, which are even worse. Give an artist enough of these and they’ll die.

Yeah, Bemused is surprisingly dark. Hang in there.

For the most part, the turn structure is entirely unremarkable. You draw a pair of cards, play one of them, maybe play another if your virtuoso has the wherewithal (read: is not insane or dead), and then discard down. Your options aren’t anything to sneeze at, not right at first. You can seed doubt, hammer somebody with dread, or maybe play one of your own cards to activate your artist’s ability. It’s simple stuff.

The Poet ain’t looking so hot.

But look. It’s time to talk about secrets.

In addition to your virtuoso’s gemina, you also have a secret, which is a guideline for how you feel about your gemina. Perhaps you want to see them suffer, meaning you’ll pick up a couple extra points if they’re dead or insane. Or maybe you genuinely love them, so you’ll do everything in your power to keep them alive. Or maybe you’re a weirdo who reveres their work but doesn’t want them to release a loony sophomore album, so you’re fine with them being dead or alive. Anything but insane.

Now, don’t think for a minute that this makes Bemused a social deduction game. It isn’t. It’s a social game.

Here’s what I mean by that. For the most part, your secret is just a guideline, a way of scoring an extra point or two. The real meat of the game revolves around who’s picking on whom, which artist is using their ability as leverage, what pair of virtuosos seem to have joined into an alliance. It’s about navigating ambiguous social spaces, parsing relationships and intentions. Every action will be met with bluster, people will shove each other like kids on the playground when the proctor’s back is turned, and you’ll witness a university prison experiment’s worth of groupthink unfolding as everybody merrily bullies the one poor sap who showed a moment’s weakness. Unlike most social deduction games, which pitch themselves as puzzles to be unraveled, there’s no unraveling the human mind. Until you make someone go insane, anyway.

Not that insanity means you’re out of the game. Instead, insane virtuosos draw their cards at random, sometimes forced to behave irrationally because of whatever they happened to pick up. Neither is death the end. It’s even possible for the dead to massacre the living, winning from beyond the grave. Beware those who you drive bananas, and especially beware those you shoved off a bridge. 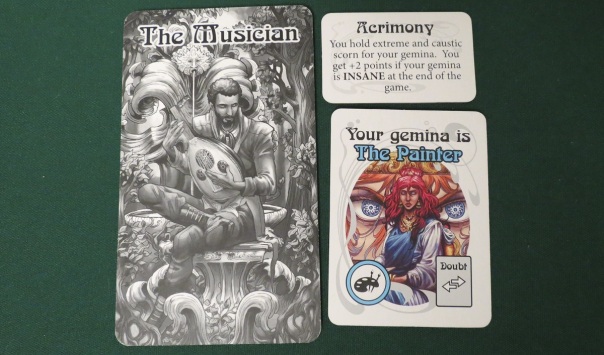 The beauty of Bemused is that it weaves a narrative without any real parallel. Without being either complicated or long — or even particularly deep — it manages to be rich, prompting more table-talk, bartering, and outright lying than most games manage in quadruple the play space. When the last virtuosos topple like dominoes and everyone reveals their social network of geminas and secrets, there’s something wonderful about watching everyone explode into a final round of accusations. “You loved me? Then why did you kill me?” “Are you sure you read your cards right?” “Yeah, you murdered me. But then I haunted everyone to death, so there.” Perhaps the highest compliment I can pay is that I have yet to wrap up a game without everyone at the table asking for another shot.

Like the rest of Jim Felli’s catalog, Bemused is weird as hell. Long live Bemused.

Posted on April 26, 2017, in Board Game and tagged Bemused, Board Games, Devious Weasel Games, Jim Felli. Bookmark the permalink. 11 Comments.