← Betray Me Twice, Shame On Me
If It Quacks Like a Quack… →

Look, I love weird social games. How else could Bemused earn a spot as one of my favorite titles of all time? So when G.I.F.T. starts talking about attending an afterlife tea party, meeting the gods of life and death, and being forced to entertain them by stringing silly sentences together in order to stitch your body back together, I’m there. This getup isn’t even particularly illogical. Why shouldn’t a deity want you to debase yourself by assembling preposterous acrostics? Have you seen the world we live in? Makes sense as far as I’m concerned.

But that’s the elevator pitch. In practice, however… let’s get into it.

Well, at least it has a unique aesthetic.

Five letters, each corresponding with an organ that you desperately want woven back into your body. Five cards, each boasting five prefixes like abo, sou, cut, bea, and den. That’s twenty-five total prefixes, for anyone who failed second grade arithmetic. This is everything you need to begin stealing yourself out of… well, not hell, I don’t think. Somewhere foggy. It probably smells of mildew there. Either way, you want out.

Every round begins by giving somebody the mantle of the God of Life. Far more than a fancy term for “first player” (though it’s that, too), this person makes the round’s first decision, taking those five letters and arranging three, four, or all of them into a row. Then everybody stares at those letters for a moment, checks their prefixes, and comes up with

It doesn’t sound like much, so I’ll give you an example. If the assembled letters are C.U.T.E., you might get sentences like, “celestial ursas train earwigs” or “cool underwear tightens easily.” Geoff will always attempt something sexual: “centrifugal undulations throb exceedingly.” I might spit out nonsense along the lines of, “Christ understands teleological eschatology.” You know. Sentences. Everybody chuckles, because words can become strange alien things that don’t feel natural wheezing from our mouths.

There are two twists that make G.I.F.T. turn in on itself like a still-doughy pretzel. First, you’re using one or more of your prefixes to craft your sentence. This is your “keyword.” Successfully make one keyword and you’ll earn that letter’s corresponding organ. Two keywords earns you two organs. And so forth. Earn all five and you’re outta this stinking place. 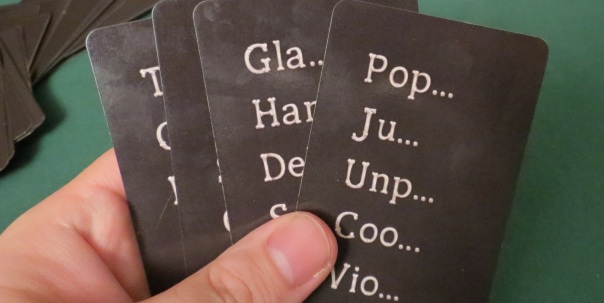 I love how contextless this can seem.

But that’s too easy, right? Which is why the second twist is that everybody at the table now decides whether they want to guess which keyword you’re trying to smuggle past this afterlife’s acrostic-loving deities. There’s some risk to this, as you’d expect from bargains with a god. Making a correct guess comes down to a few factors, like any standout noises at the start of a word, a shoehorned phrase, which organs a player is hunting, or whether somebody used a prefix in your hand or that you’ve seen before. For example, the keyword in “lies are relative virtues” might be concealed in virtues, or could be lurking somewhere subtler. Only one guess is permitted per keyword — so, while it might be tempting to sneak another prefix in there, you’re doubling the odds that you’ll get caught. Even worse, messing up by having your keyword guessed, or guessing somebody else’s keyword incorrectly, means that the winner gets to take another organ, whether from the pile or from your own body.

On the one hand, this allows for bold plays and wild swings, especially near the conclusion of the game. Correctly smuggling a pair of keywords by making the other words in your sentence sound less probable is a devilish delight. Sussing out a suspicious letter through some combination of elimination and deduction always feels brilliant.

Then there’s the rest of the time, because I’m not convinced that clever play is always possible in G.I.F.T. The principal problem is that there are so many prefixes that it’s often possible to camouflage your letter with relative ease, at least provided you know some vocabulary. Rather than presenting a cycle of bluffing and deduction, its loop is more one of crafting a sentence with some odd words, and then guessing (rather than deducing) a keyword. Unlike other word game exemplars, its moments of brilliance feel cavernously spaced, the exception rather than the rule. It doesn’t help that those five body parts can be assembled surprisingly rapidly, especially once you start stealing from your neighbors.

Then again, we did find ourselves chuckling more often than not. For some folks, maybe that will be enough.

Either way, G.I.F.T. has struck upon something amusing, if not always as clever as it seems to think. It’s simple to play, produces humorous sequences of words and ideas with ease, and generally elicits a few laughs. Despite throwing up some genuinely funny moments, it doesn’t quite stand out among the classics of wordplay and deduction — and, frankly, might not stand out at all, given the whisper campaign it’s currently waging on Kickstarter, which doesn’t seem to have been announced on the publisher’s own site. More’s the pity. While my personal acrostic for G.I.F.T. might be D.B.W.G., it still manages to be more compelling than any number of overloaded miniatures games.

A preview copy was provided.

Posted on February 25, 2019, in Board Game and tagged Board Games, ClueJar, GIFT, The Fruits of Kickstarter. Bookmark the permalink. Leave a comment.

← Betray Me Twice, Shame On Me
If It Quacks Like a Quack… →