Bemused was not only a fantastic game, it was also one of my favorites of 2017. Where most social deduction games revolve around a single secret of falsified identity, Bemused hosted an entire madhouse of enigmas. Obsession, passion, lust, petty hatred, unknown goals and broken promises — all crisscrossing over and under one another, and all as impenetrable and changeable as the players commanding their fates. It was both less and more than social deduction; just a social game full stop, ambiguous and uncertain.

Now Jim Felli has further refined the concept with Dûhr: The Lesser Houses. And although its name is guaranteed to elicit at least one sarcastic howl of “Dur dur dur!” per play, it’s an improvement on Bemused in every sense but one. 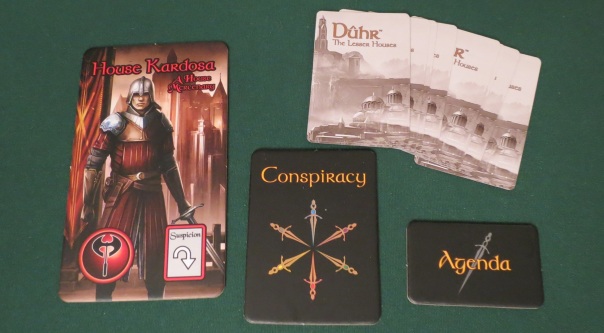 House Kardosa, the only household of Dûhr that wears pants.

As I wrote in my review of Bemused, the first thing I do whenever I teach a game is explain how you win. That way, the ghostly bones of the rules are made solid. The actions you’ll take, the thematic vocabulary you’ll utter, even the exceptions and corner cases that may stymie first-timers, all become the steps you need to consider in order to traverse the path from setup to the final victory count.

Not so in Bemused, and not so in Dûhr.

After all, to explain victory would really be to explain two very different things. Sure, it would include the details of how you score. That a household in good favor with Dûhr’s populace is more likely to win than one that’s found disfavor, which in turn is more likely to succeed than a household that’s been ejected from polite society and resorted to villainy. That you have a conspiracy hidden within another of the game’s households, plus an agenda that may or may not prompt some manipulation of that household. That no matter where you’re at, there’s always some way you can claw yourself back into good standing with the people of Dûhr and your fellows at the table.

I could say that. But it wouldn’t make much sense. Far better to tell a newcomer, “You win by tricking everyone at the table into hating everybody else more than they hate you.” That cuts closer to the bone than talk of victory points and agendas.

Still, as abstract as they are, the basics are reasonably straightforward. Everyone has a hand of cards, which are played slightly differently depending on the status of their household. When you’re favored — the default state — you have the option of playing two actions, though this gradually diminishes your hand size. When disfavored, and thus partially cut off from your noble connections, you randomly draw two cards from your hand each turn. And as a villain, your game transforms into one of dragging everyone into the same morass, plaguing them with scandals and doing your utmost to end the game only at the precise moment of your choosing. Misery loves company.

Webs of scandal! Webs of suspicion! Webs of discardery!

For the most part, the turn-by-turn process sounds entirely unremarkable. Deploying a household’s suspicion card will slowly drive them toward disfavor, while scandals tilt them over the ledge toward villainy. Your own cards activate your household ability, letting you move, remove, or block all those suspicions and scandals. Every so often, you might play an event that lets you steal some cards, borrow another player’s ability, or even swap two households’ agendas.

Sounds simple, right? But it’s only as simple as human people are simple, and within a few turns the table becomes a mess of suspicion cards while the space above it buzzes with almost-real resentments and loyalties. Some will mark themselves as protective or vindictive toward their fellows — usually in pursuit of an agenda — while others quietly go about the work of establishing their defenses or hoarding useful cards for later.

It’s difficult to describe for much the same reason that it’s hard to explain the anxiety of walking in on a fraught social moment and sensing the hidden upsets and alliances and baggage that comes parcel with it. Much like a family argument on the verge of boiling over into a full-on shouting match, with Dad getting increasingly hot under the collar while Sister can’t help but mention that one time that Barbara stole from Mom’s purse, the tension has the pliability of boot leather. 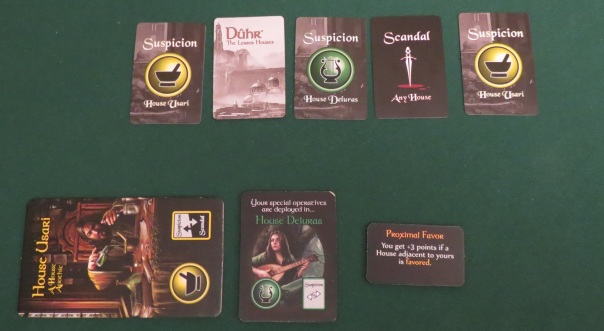 House Usari, the only household of Dûhr that gets blackout drunk on their own supply.

Meanwhile, the most significant departure from Bemused is the masterstroke, which tosses yet another splash of hot oil into the face of every single argument. In Bemused, your doomed virtuosos were always slaves to the turn order, acting in sequence without deviation. Here, a pair of matching cards gives you untold power even beyond the confines of your proper turn. When someone utilizes an event, scandal, or household ability, anyone can toss out a matching pair to cancel it — or cancel that cancellation.

This is key. It isn’t long before the negotiations begin taking advantage of this additional edge. When no action is certain and anybody might be coming for you, it pays to play it careful and avoid making too many enemies, at least until you’ve established a way to cut them off at the knees. More than ever, taking stock of your hand is crucial. Employ too many double actions or masterstrokes and you’ll find your influence waning to nothing. There was always an element of hand management to Bemused; now it’s absolutely critical.

In fact, between its masterstrokes, event cards, and the expanded role of agendas, Dûhr establishes itself as superior to Bemused in every single way but one — the setting.

As much as I adore the machinations of medieval nobles, it’s the sort of thing that’s been done, and done, and done again, until it seems inconceivable that any medieval noble might not be interested in making the world dance to the jig of his invisible puppet-strings. It’s telling that my group still refers to the tilting of a household as “going crazy,” borrowing the colorful nomenclature of Bemused’s insane artists rather than resorting to the newer, less exciting realities of the humorously-named city of Dûhr. This is by far the more marketable setting, swapping the esoteric for the familiar, but I miss the idiosyncratic boldness of the original.

In spite of its toned-down setting, there’s a rare purity to Dûhr: The Lesser Houses. It’s content to let its players prosper or flounder within the depths of its social ambiguity and minor deduction, weaving a narrative of misunderstanding, resentment, and ultimate collapse as players align, feud, and eventually topple like dominoes as the game slams toward its conclusion. And what a conclusion it is, its cavalcade of revealed agendas finally shedding light on why so-and-so was pestering such-and-such. If it’s wrong that a game as cutthroat as this should give rise to so much laughter, I don’t want to be right.

There aren’t many games as confidently subtle as this. It may prompt the occasional “Dur?”, but there’s nothing lesser about it.

(If what I’m doing at Space-Biff! is valuable to you in some way, please consider dropping by my Patreon campaign. One of the many considerable perks of your support is that I will help you navigate an ambiguous social situation. Possibly an awkward date, a family party you didn’t want to attend, or telling your deeply religious grandmother that you’re converting to a different faith.)

Disclaimer: I playtested Dûhr. Mostly this consisted of whining about the setting and pointing out an imbalance in the agendas. A complimentary copy was provided.

Posted on July 3, 2018, in Board Game and tagged Board Games, Dûhr: The Lesser Houses, Devious Weasel Games, Jim Felli. Bookmark the permalink. 11 Comments.