Not every game is as it first appears. Today is about them. These are the pleasant surprises, the ear-worms, and the ones that smile right before slugging you in the nose.

The best thing about Solstice — which may or may not include the subtitle “Fall of Empire” — is that it’s entirely willing to throw convention out the window. At first glance it might seem like your average drafting game, with players picking up soldiers, elders, and the occasional assassin. You then deploy these cards to the surface of planets, often in secret but occasionally with some manner of disclosure, like admitting to your fellows if the card was an event, at which point strength and influence are totaled and points are awarded.

But this is where Solstice shows its true colors. Rather than drafting cards for your own use, you’re often forced to acquire the minions of other players. That marshal you’re holding? There’s a good chance he’s actually loyal to one of your enemies. Trippy.

However, rather than making a chaotic mess of itself — and it absolutely could have been as messy as a kitten orphanage after an orbital bombardment — the fact that cards are generally played face-down with only the barest tidbits of information made public is enough to transform this into a game of misdirection, information brokerage, and outsmarting your opponents at every turn. Announcing that you’ve placed a helpless duchess on a planet is a surefire way to attract assassins, and meanwhile you’re free to focus your attention elsewhere. In short, Solstice is a game that rewards penetrating insight into the way your friends think.

As a sequel to Above and Below, Ryan Laukat’s Near and Far is pretty much a failure. It’s less interested in building a town, or, well, in any of the other things its predecessor was trying to do.

Instead, all that stuff is jettisoned in favor of a much tighter focus on the actual adventuring. Rather than building a town, you’re building a reputation. In place of beds, houses, and mushroom plantations, you’ve got companions to recruit, artifacts to wield, and kiwi-birds to ride. Sure, there’s also some light mining, and camps can be pitched across each of the game’s gorgeous landscapes, but the center of attention is always firmly on you, not some dippy homestead.

Speaking of the maps, Near and Far also reminds us why Ryan Laukat is popular in the first place. By breaking itself into discrete scenarios, we’re not only treated to as many of Laukat’s illustrations as possible, but also given a better sense of narrative growth. No longer must every adventure bear an equal chance of occurrence; now, an encounter in the desert can be appropriately deserted, while gallivanting across the open prairie weaves tales about, I dunno, hog-goblins or something.

What if you could talk to the monsters? In Fate of the Elder Gods, there’s still no communicating with the squamous-hided monstrosities of the uncaring void, but there is communing with them. As the hopeful cultists of one of H.P. Lovecraft’s stable of stickies, it’s your job to utter lots of mumbo-jumbo, kill perky investigative reporters when they come knock-knocking at your lodge door, and eventually draw forth a creature that will treat Earth like a chew toy.

But what gives Fate of the Elder Gods its many rows of teeth is the fact that you — you the player, not you the cultist — must actually engage in some arcane mumbo-jumbo of your own. To put it lightly, reading the board requires a goodly number of points invested into your lore stat. Magic cards dictate where you can send your cultists, then pile up over time to determine the arcane spells you can learn. Eventually, sufficiently bulky gaggles of cultists can lead to special bonuses at the board’s locations, or can be sacrificed to hasten your summoning ritual.

Look, I’m not going to be able to explain it in three paragraphs. The point is, Fate of the Elder Gods makes the act of drawing a cosmic beast through a pinhole appropriately eldritch-y, lets you tattletell on your rivals to the coppers, then throws every conceivable problem at your ill-fated lodge, and every last minute of it is delightfully incomprehensible. 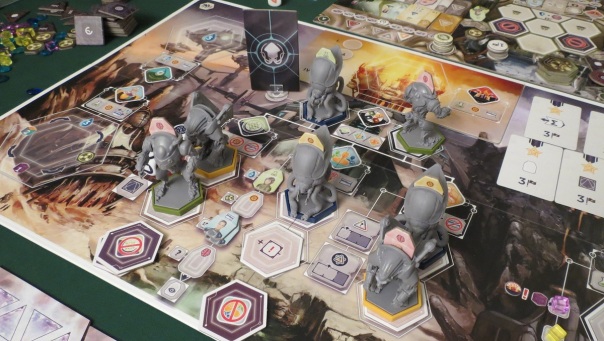 There are two sequential moments in Anachrony, one that seems humdrum and one that’s a little more liable to blow your mind. The first arrives when you examine the possibility of requesting resources from your future self. By leaving a note tucked under a rock, your time-portal will buzz and suddenly there’s what you needed, water or energy cores or even an exosuit for navigating the toxic landscape. The rub, however, is that you need to eventually generate the resource to send back to previous-you.

But you never get around to paying that loan, because like an IOU tucked into your own piggy bank, what’s the point of paying yourself back? That’s when the second moment hits. When that loan comes due, you aren’t merely penalized a point or two. Instead, a paradox opens up, consuming a portion of your base, and you must send one of your employees through the rift in time, 12 Monkeys style, to sacrifice their life to seal it.

That’s just the first of a solid half-dozen what-the-hell moments in Anachrony. Best of all, every last one of them is folded carefully into the game’s overall design, crafting an experience that’s both wild and easy to direct.

If volume were the only qualifier, Gloomhaven would win 2017 all on its own. Boasting more classes, monsters, and scenarios than you’re likely to finish in a decade, Gloomhaven is certainly an accomplishment of scale.

Far more importantly, Isaac Childres has fashioned one of the slickest dungeon-diving systems of all time. Rather than forcing someone to behave as the dungeon keeper, the baddies are governed by a number of subtle interlocking systems. First up are the scenarios themselves, which give each arena the proper shape, timing, and challenge for a particular set of monsters. Then there are the decks that give life to their behavior, meaning that sometimes skeletons will clickety-clack across the room and sometimes burst into a flurry of limbs and blades. It occasionally feels artificial, with adjacent monsters opting to do something other than attacking a weakened target, but the miracle lies in how rarely that happens.

Gloomhaven’s sprawling campaign also gets its time in the sun, introducing new characters and challenges at a steady pace. With so much good stuff rattling around in its oversized box, it’s a game I’ll likely be playing well into 2031.

As far as I’m concerned, any game that ties into a television show is immediately suspect unless it was published by Gale Force 9. The cardboard rendering of The Expanse was not, so it had every chance of being a trashy way to extract a few dollars from the wallets of under-researching fans.

Instead, Geoff Engelstein and WizKids have crafted a game that unveils one surprise after another. On the surface lies an area control game where ships dominate the skies and influence piles up in individual stations and resource nodes. Beneath that is a card system more at home in a wargame like Twilight Struggle or the COIN Series. Factions jockey for initiative and the proper cards to gain an edge. And the whole thing is rounded out by four sides that each bring their own advantages to the table, like the numerous junk ships of the Belters, the political influence of the U.N., the professional navy of Mars, and the bioweapons of Protogen.

With the rapid staccato of a warship’s point defense cannons, The Expanse just keeps getting better. Between variable scoring conditions, some light negotiation, and the ability to swing everything into your favor with a cleverly executed hole-card, this is seriously good stuff.

Oh, and dumb Captain James Holden keeps showing up to ruin the day, but at least this time you can send him off to Saturn if you like.

Picture your run-of-the-mill colonial Eurogame. Now strip out all its nonsense about spinning linen to please your merchant lord, add a healthy dash of tropical magic, and play as the guardian spirits of the oppressed locals. Meet Spirit Island.

While social consciousness is probably the main reason people have heard of Spirit Island, that’s just the first of its many accomplishments. Yes, the game’s miniature Jamestowns are in for an ass-stomping, and there’s historical catharsis to be found in playing as Lapu-Lapu rather than Magellan for once. But as a cooperative game, it’s sublime — and that isn’t a phrase you’ll hear from me with any regularity.

Every spirit provides their own playstyle, from the way Lightning’s Swift Strike slowly gathers electricity and unleashes it in a sudden jolt of death to the ebbs and surges of Ocean’s Hungry Grasp as it soaks the beaches with blood. Meanwhile, the colonists have plans of their own, whether exploiting natural resources, building new settlements, or exploring the interior of the island. These two sides then wage a vicious tug of war for supremacy, both gaining incremental advantages as the years go by. In a sense, it’s one of the best insurgent warfare games ever made, except instead of hoarding AK-47s, you’re preparing to loose a volcano beneath your enemy’s feet. And when that becomes too breezy, Spirit Island’s modifiable difficulty makes it a cinch to take the challenge up a notch.

It isn’t about the arts, though you play as an artist.

It isn’t about obsession, though its artists are certainly obsessed with being the greatest of their generation.

It isn’t a social deduction game, though there are things to deduce. It’s possible that your artist is desperately in love with someone, or maybe just hates them. Maybe they want to see a rival’s mind slowly rot as they’re driven insane by the pressures of their creations.

So what is Bemused? It’s hard to say. I have a theory that every game is, in small part, about navigating poorly-defined social spaces. They’re a way for us to feel around the edges of people, tidbits of wood and plastic that help us figure out what a person’s boundaries are. It’s the reason nearly every game features negotiation if you’re willing to open your mouth. Don’t attack me and I won’t attack you. If you attack Geoff, I’ll keep this border secure. Everyone attack the leader.

I suspect Bemused is about that. It strips away everything but sheer competition and persuasion. There are roles, but you likely won’t figure them out. There are rules, but not many of them. There are guidelines and a thematic framework, but it’s really about sitting around a table with some friends and talking them into killing someone other than you. It’s the ultimate poorly-defined social space, and it sets you loose within it. And when set loose in such a place, we’re all sociopaths.

Or maybe it’s just me. Either way, Bemused is easily one of the year’s most unique, clever, and outright devious designs. Everyone should play it.

There you have it! 2017 was an excellent year. Which games took you by surprise?

Posted on December 30, 2017, in Board Game and tagged Best Week!, Board Games, Space-Biff!. Bookmark the permalink. 7 Comments.