The Crisis Gets Lonely

Given this hobby’s churn of new releases, it isn’t often that I get to stick with a single game long enough for an expansion to roll around. Wray Ferrell and Brad Johnson’s Time of Crisis is an exception, and has reappeared on my table regularly ever since its release nearly two years back.

Good thing I waited around, because The Age of Iron and Rust may be one of my favorite expansions, adding three modules that transform this into one of my absolute favorite deck-building hybrids — and a considerable solo offering to boot.

Variety wasn’t Time of Crisis’s strong suit. Not that this was a problem. I didn’t complain about it in my review, and naturally my review captured everything about the game that mattered. But with only three options per sphere — military, senate, and popular support — particular builds tended to step to the fore with all the misplaced enthusiasm of a barracks emperor. Breakaway empires were common, barbarian foederati were recruited with regularity, and the same tricks tended to appear in battle.

Here’s the good news: The Age of Iron and Rust doubles the quantity of available cards, boosting each sphere with considerable alternatives. Military commanders, for example, can now deploy a forced march to battle or move more than once with a critical army, or employ spicula to harangue opponents with some pre-battle skirmishing. Senatorial players can increase their purchasing power or leave half of their cards unpicked until their next turn, both of which provide tremendous flexibility. And populists can finagle extra votes, assault a rival’s provincial support, or even diminish other players’ hands.

There are so many new things to try that every purchase is more than twice as tricky. Rather than only picking between spheres — and deck balance in the process — you’re also picking between the frontier security of tribute or the economic freedom to nab better cards in the future, or boosted defense from forts and quaestors or offensive power thanks to battle tiebreakers or extra voting power. Unlike the original game, where you likely had a particular card that could be used eventually, now it’s possible to go the entire game without ever gaining access to particular abilities. Caveat emptor, because there’s no sting quite like wishing you had a pretender card because you took a demagogue instead.

If there’s a downside, it’s that there’s more to consider and certain cards feel slightly anemic alongside their counterpart. Being able to stick it to the previous emperor with damnatio memoriae is great and all, but I’ll likely have three times as many opportunities to throw myself a triumph. Then again, maybe I just suck at appointing myself emperor.

New types of emperors can rule far from Rome. Or stay in Rome, since this guy is boring.

Don’t get your toga in a twist, there’s still only one emperor. You know, unless a pretender sets up a breakaway kingdom or a challenger appears because of an event. But other than that, don’t expect anybody to partition the empire into a tetrarchy. I’ve never seen the game end because of Diocletian anyway.

Instead, this module provides a set of tokens — two per team, so it’s tiny — that let you dictate what sort of emperor you will be. The vanilla flavor is the senatorial emperor. Picture the base game’s emperor and you’ll have the gist. He sits in Rome, earns bonus legacy from prolonging his time in Rome, and — this is the new part — because he’s popular with the senate, nobody will be condemning his memory upon assuming control over his duties. That’s right: no damnatio memoriae.

The other two emperors, though, both provide worthwhile avenues of their own. The first is the popular emperor. Rather than chilling in Rome, this guy rules from one of his provinces. This doubles the territory he’s required to defend, since losing either Rome or his distant capital will oust him, but he also earns legacy equal to twice his support in whichever province he rules from. The last and most dynamic is the military emperor, who rides around with an army and dives into battle. Legacy from battles is doubled, but it behooves you to be cautious because every hit forces you to roll a die, with 5s and 6s meaning your emperor got poked in the belly with a spear and died screaming from a septic gut wound. Life sucked prior to antibiotics.

The best part of this module is that each of these emperors is valuable in different situations. If you have a lot of territory with flimsy support, the senate is the route to big earnings, while a compact region with robust support will pay off for popular emperors. The military emperor seems trickier at first, especially since he might die at any moment. But when paired with forced march and spiculum, it’s possible to avoid damage and win two battles in a single turn — the perfect option for someone who doesn’t expect to hold Rome for more than a short while.

Regardless, this does quite a lot with very little. There’s still only one emperor at a time — official emperor — but his geographical location informs the circumstances of everybody else’s plotting.

The robot emperors are tough to beat.

The final module is more specialized, adding three robo-emperors to fill out a game with fewer than four players, or even allow a solo player to compete against three automated rivals.

Yes, it’s a spreadsheet. More accurately, multiple spreadsheets. But to use a phrase you won’t hear me utter very often, the beauty of these particular spreadsheets is in how smoothly they differentiate their three emperors. Each has a focus aligning with one of the game’s three spheres. From there, a chart tracks that emperor’s deck composition, while three cylinders move back and forth to denote how much of their deck they’ve gone through, switching between focuses like “defend your frontier” and “oh crap I ran out of my good cards.”

This tracks their deck without forcing you to manipulate any cards at all. Robo-emperors receive two types of influence per turn, and possibly trigger special abilities that correspond with the game’s cards — all handled by the chart, with a handy reference for what each ability does when used by an automaton. Influence is spent according to a flowchart that creates priorities, first defending provinces troubled by barbarians or rivals, then spreading influence into vulnerable locations, and ultimately beefing up their military and support. Sometimes there are loops or omissions to follow, but for the most part the flowchart is intuitive. When finished, rather than purchasing cards, robots purchase upgrades on their track, growing more formidable as the game progresses.

Not only does it function, which is usually what I ask from a flowchart, but it functions well, putting up a stiff fight and striking at openings with a relentless efficiency appropriate to an automaton. Some of this is due to the way it cheats, upgrading swiftly and accessing certain abilities before anyone else at the table could afford them. But it’s a soft form of cheating, providing boosts in place of cleverness and generally restricting itself to the realm of ultra-efficient play. Most importantly, it makes a splash without necessarily creating a tidal wave. For example, down below is a picture in which one faction has created a breakaway empire, another is assaulting Rome, and the third is the current emperor biding his time before he’s deposed. None of those factions are me — they’re all robots, reacting to opportunities and weaknesses. I didn’t win, but it was a close contest.

In other words, as a solo mode, it’s far smoother than, say, SpaceCorp. 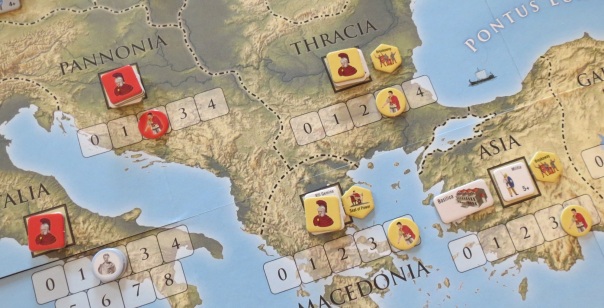 Everyone is in power but me.

Normally I’m loathe to write about expansions. They’re usually piddly things, forcing me to evaluate modules and additions with all the joy of carrying the x in a nasty algebra problem. The Age of Iron and Rust is an exception. Everything it adds to Time of Crisis is a treat, broadening your options not only by volume but also by breadth, providing new avenues to victory and new ways to play. Trying to get ahead while the empire burns has never been better.

Posted on March 28, 2019, in Board Game and tagged Alone Time, Board Games, GMT Games, Time of Crisis. Bookmark the permalink. 3 Comments.