← The Crisis Gets Lonely
Book-Space! #9: A Darkling Sea →

In Defense of Monopoly

Monopoly gets a bad rap. Recently, an amusing video by YouTube channel Actualol even featured a woman getting shot point-blank in the head for having the gall to recommend a pleasant evening of purchasing properties and driving someone bankrupt two hours before the actual conclusion of the game. A few short minutes at your friendly local game store will confirm the sentiment that Monopoly is this generation’s favorite target of oppression and bigotry.

But surely 275 million copies sold can’t be wrong. Fun fact: did you know Hasbro prints $30 billion in paper Monopoly money every year? That’s roughly what The Bezos earns every time you enable one-click purchases on Amazon, but less depressing. Which is why I’ve decided to stake my reputation on defending this wonderful game with seven reasons why it’s better than you remember.

This is the Monopoly board game.

#1. Everybody Plays It Wrong

Because Monopoly apologists don’t mention this at literally every opportunity, you probably aren’t aware that you’ve been playing Monopoly wrong since childhood. First of all, that Free Parking thing, where you take the pool of money generated by income and luxury taxes, is as real as that farm your parents sent your aging pet to. That’s right, they made it up because you wouldn’t stop complaining about how poorly you were doing. You didn’t even land on that spot. They fudged the counting and you were too bad at adding nines to notice. Meanwhile, more money was infused into the economy, it took longer for people to go bankrupt, and the game lasted four hours longer than it should have.

Also, you don’t have to buy everything you land on. Any property that isn’t immediately purchased at cost gets auctioned off, even for less than its going price, which makes Monopoly the great granddaddy of beloved auction games like Modern Art or The Estates. I could expand at length about how this transforms Monopoly from a boring slog into a conniving affair of perceived value and barrel-bottom acquisition, but that’s a feature-length article for another time.

#2. Everything Good Happens on Somebody Else’s Turn

One of the toughest questions in board gaming is, “How do you keep people invested when it isn’t their turn?” Even modern games struggle to answer this one, offering fast or simultaneous play, a steady trickle of information, evocative flavor text, or electronic apps belching noise in your ears — but Monopoly answered it way back in 1935. To give you a sense for how long ago that is, there are no people alive today who were also alive back then.

Consider this: on your turn, you roll two dice and move exactly as far as those dice tell you. That’s even more basic than Candy Land because it doesn’t have a spinner. But this simple roll-and-move pairing is laden with dread because there’s a good chance you’ll land on somebody’s property and have to pay them a rent. Not so when it isn’t your turn! Monopoly’s off-turn is a thing of laughter and beauty in which your business rivals drive past your properties for a change. Nearly every cent is earned courtesy of another player’s roll. That’s simply good design. 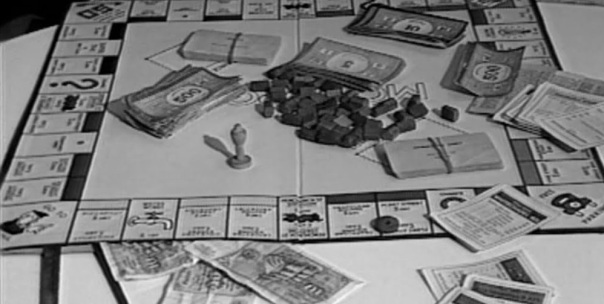 Like most people born in 1935, Monopoly has seen some stuff. The invention of radio, cars, aeroplanes, the first Thunderdome — lots of things. Along the way, it also helped to win the Second World War when the British Secret Intelligence Service produced a version for soldiers in German POW camps that featured hidden (real) money, silk maps, compasses, and Browning Automatic Rifles. Everything a soldier required to escape and rejoin the effort to vanquish fascism, at least until its rebirth seventy years later.

Its historical significance goes back even further to 1903, when Lizzie Magie invented the first version of the game that Charles Darrow would later plagiarize and sell to Parker Brothers. This original version, entitled The Landlord’s Game, was an educational tool promoting Henry George’s single tax theory, wherein any economic value derived from land would be commonly held by all members of society rather than locked away by industrialists with monopolistic tendencies, which helps explain why the game itself is a dehumanizing death march from which even the winner emerges without any ability to enjoy life and all its bounties.

#4. That Said, Nobody Remembers Lizzie Magie — So Just Have Fun!

Never mind that the game that most fully embodies the horrors of unrestrained acquisition is also its own greatest critic. Don’t think. Just buy. If you’re reading this article, there’s an eighty percent chance that’s your principal commercial function anyway. So why worry about it? Speaking of which…

This man has been placed in jail.

#5. Monopoly Is Both Uncompromisingly Honest and an Escapist Fantasy

Remember the last time a wealthy CEO went to prison? Me neither. Not for more than a stint, anyway. Probably not even that; did you check? I didn’t. But I’ll bet a wooden nickel that any prison was better appointed than Pablo Escobar’s La Catedral.

Monopoly not only acknowledges this state of affairs, in which robber barons operating with the full legal weight of the state are allowed to indulge in their most abusive and rapacious tendencies, only to be lightly fined when their banking institution fraudulently creates millions of checking and savings accounts without permission from their clients, but it also lets you enjoy the fantasy escapism of briefly pretending that you too are one of these soulless automatons preoccupied with nothing but wealth, and improbably supported by millions of adherents of the same religion that was ostensibly based on the words of a first-century rabbi who roundly condemned the concept of hoarding money. What jolly fun!

Ever visited a national park? Or a theme park? Or your corner coffee shop? Congratulations — there’s a version of Monopoly commemorating that very locale! Better yet, you can indulge your culturally programmed need to constantly funnel your wages to a faceless corporation by collecting as many as possible. Naturally they are all unique, adorned with Rich Uncle Pennybags and slight thematic variations and low-resolution licensed images.

Buy more. Buy. Buy. Buy. You are nothing, meatbag, but an experiment in how to metamorphose your inherent personal value into more chum for the sharks. How their teeth will rip and tear. How they shall feast. They do not need to. There is sufficient digesta in their bellies to sustain them for another thousand thousand generations, and their squirming young as well. But feed they shall, until their stomachs distend and their intestines erupt from their abdominal wall, until their esophagus is raw and scraped, until from every orifice dangles the half-wrung filaments of your person. Only then can they claim that they are winners. But winners of what? There is no telling. Buy. Buy. Buy. BUY.

A human being made this decision.

And there you have it! Between its prescient design philosophy, historical and cultural significance, and YOU MUST BUY THIS GAME, Monopoly is a wonderful title for families of all ages and compositions.

One thousand complimentary copies were provided.

Posted on April 1, 2019, in Board Game and tagged Board Games, Hasbro, Monopoly. Bookmark the permalink. 23 Comments.

← The Crisis Gets Lonely
Book-Space! #9: A Darkling Sea →