At long last, it’s here! The Space-Biff! Best Week! is widely recognized by no fewer than eight people as the finest end-of-year list in existence. Five days, five games apiece. All the best.

Today is about revitalization. These are the games that were forged anew — remakes, definitive editions, new seasons, fresh takes on classics. More than the recipients of a fresh coat of paint, today’s victors are ones that perhaps I appreciated, but have been crafted into something better than ever. 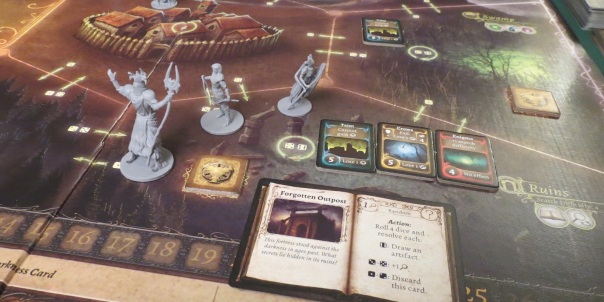 I’ve always had a soft spot for Darkest Night, especially solo. With multiple players, your single action per turn tends to wear thin, especially when loitering around a haunted forest for a few rounds. But on your own, in command of four randomly-selected heroes, the whole thing adopts an entirely different tone. Whether evaluating upgrades for potential combos, licking your wounds, or hunting the Necromancer for the final showdown, your characters’ limitations are no longer irritants — they’re an integral part of the setting. They may be heroes, but they’re also scared, frail, and would rather hide out in a monastery than face the final baddie directly.

And nowhere is that more apparent than in the definitive Second Edition. Every one of the original’s many expansions have been included. More than that, they’ve been fine-tuned to fit together more comfortably than ever. That’s twenty-nine heroes, hundreds of adventures and quests and artifacts and blights, along with multiple difficulty levels, a larger map, and a totally unnecessary miniatures expansion (it’s better with standees), all bound together into one of the finest examples of how a single gameplay concept can be honed until it cuts with molecular sharpness. This is a far cry from the old woodsmoke reek of Victory Point Games’ laser cutter.

You can read my review here, or a Two Minds About… writeup with Brock Poulsen over here.

When I first previewed EXCEED three years ago, I wasn’t quite ready to pronounce it the better of D. Brad Talton, Jr.’s fighting systems. None of my original reservations remain. With the release of this year’s second season, this has clearly — pardon me — exceeded BattleCON in nearly every way.

And this time, those transformations from regular fighter to something straight outta hell aren’t obvious choices. In fact, there’s very little obvious about EXCEED. When to move and where; which cards to hold, burn for boosts, or use in a fight; how to spend all those hard-earned exceed points. Every turn captures the perpetual cardiac arrest of BattleCON, but without the agonizing stutter-stops. The result is one of the finest dueling games ever made.

I haven’t reviewed season two, but my thoughts on season one are right here.

There’s a lot to say about Endeavor. For one thing, it’s one of those rare examples of cardboard colonialism that acknowledges its heritage while still managing to be playable. Crud, more than playable. It’s both wonderfully simple and deep at the same time, striking a hypnotic tempo of placing control discs and scooping up tokens. Your empire spreads across Europe, locks down a few trade connections, and then, before you know it, you’re convincing far-flung nations to exchange their natural resources for some powdered wigs.

Age of Sail shakes up that model with exploits, sideboards that feature everything from revolutions to pirate republics. There are fifteen, but each play features only three — not so many that you’re drowning in complexity, but just enough to rattle the endgame with some additional scoring opportunities and new ways to use any actions that had begun to grow moldy. It’s functionally a third act, one that fills in the blanks between expansion and dominance. And it fits Endeavor like a glove. Once you’ve ended slavery via the Underground Railroad while suppressing Indian Independence, there’s no going back.

You can read my review over here.

After Jim Felli’s Bemused made for an unexpected favorite of 2017, I’ll be the first to tell you that I was disappointed with the setting of Dûhr. Feuding medieval houses? Isn’t that a bit overdone? And why is Geoff humming that dumb Game of Thrones theme?

Overdone, this is absolutely not. Fans of Bemused will be immediately comfortable with this skiwampus take on social deduction and petty rivalry, at least until they’re floundering because of all the new ways you can screw with, well, everything. The turn order is no longer sacred, for one thing. New masterstrokes provide all sorts of new ways to mess with your rivals, including stepping out of the regular order of play to interrupt somebody’s best efforts. Event cards add unexpected twists while new goals force you into awkward alliances.

Like its predecessor, its ambiguity won’t be for everybody. It’ll have you oscillating between feeling like a genius and the biggest doofus in your local tri-state area. But that’s precisely what makes it such a treat, goading its feuding lords into behaving like backstabbing little shits with every passing second. It hardly counts as bad behavior when the results are this madcap.

My review is right here.

I have enough appreciation for Tigris & Euphrates that I don’t think I prefer Yellow & Yangtze. Honestly, though, it’s hard to tell. After twenty years, Reiner Knizia’s return to his most recognized design yields modern improvements like a market row, but the bigger impact seems to stem from its more immediate format. Buildings are erected faster, warred over faster, and stolen faster. Battles feature wagers and negotiation. There are even color-coded bonuses to chase after.

And it works. Maybe not as a replacement for Tigris & Euphrates, but certainly as a companion piece. If anything, it’s another testament to the gentle background hum of Knizia’s theming. Rather than capturing the centuries-long rise, fall, and eventual coalescence of classical civilization, Yellow & Yangtze features a relative flashpoint — a mere two centuries long — as its states clash with a certain intimate bitterness, one that’s soon replaced by whichever contest next catches the eyes of its leaders. It’s both more acrimonious and more forgiving. Which might seem like a contradiction in terms, but mostly it’s just good design. Every player is both a maintainer of the status quo and an avatar of change. Often both at once.

The point is, this is the work of a master riffing on his own classic. And despite the familiarity of its getup, the result is something entirely fresh.

Feel free to read my review right over here.

(If what I’m doing at Space-Biff! is valuable to you in some way, please consider dropping by my Patreon campaign or Ko-fi. Tomorrow we’ll be looking at five more games — but there’s no need to wait! Tell me about your favorite remakes, definitive editions, or otherwise rejuvenated games in the comments below!)

Posted on December 26, 2018, in Board Game and tagged Best Week!, Board Games, Space-Biff!. Bookmark the permalink. 10 Comments.