The Air Pirates sound pretty horrid. But that’s according to the Grand Compact, the imperial center of the Aether Captains universe, and such a source reeks of propagandist bias! Perhaps the Air Pirates aren’t so bad. How do they spend their free time? Surely, in Dread Supremacy, the game that gives us a glimpse into the workings of Air Pirate government, we’ll get a clearer, better-rounded picture of Air Pirate life. Perhaps they like tea, and knitting, and adopting orphaned puppi—

Oh. Turns out they like to battle their airships against each other, at great cost of life and limb.

To be fair, this is more than mere entertainment. Each player takes the role of a pirate king hopeful, with trial by combat the only fair way to determine right to rule (let’s be honest, it’s better than nepotism).

So each player gets a bunch of airship segments, and the game progresses over two phases. In the first, each player rolls a set of dice to determine which airship parts get put together, and how many supplies, munitions, and crew are loaded onto each. This passes quickly, and is a nice little risk-vs-reward mechanism, though it relies a whole lot on the luck of your rolls and can leave a ship completely crippled from the get-go. Still, since the entire game takes less than ten minutes to play, high luck elements are permissible.

Once everyone’s got their ship assembled, it’s time to fight! I don’t know what you’re imagining at this point, but since the lore tells us the battle takes place in “Black Canyon,” I’m picturing a gigantic caged valley a la Thunderdome for blimps.

Anyway, this is another quick little rolling game. The attacker picks someone to be the defender, and both roll a set of three dice, holding one back but revealing the other two. This little bluffing mechanism gives Dread Supremacy at least the depth of rock-paper-scissors, and I don’t mean that as a jab — in addition to rock-paper-scissors being a far more nuanced psychological game than you might think (or so I’m told), Dread Supremacy makes you constantly study your opponent for signs of bluffing. See, during each battle, both sides have the option of using up some of the items they equipped during the previous phase, like the cargo hold’s extra shells, the crew quarters’ reroll, or the fore gunnery station’s +1 attack value. So not only are you rolling dice, you’re constantly modifying your combat values, repairing your ship, or bouncing resources between stations. Is your opponent holding back a low number and hoping you don’t use any of your airship’s stored equipment to boost your combat number, or is she holding a winning high number and hoping you do because anything you use will be a waste? For such a light game, it requires a whole lot of tell-reading, and leads to surprisingly agonizing decisions. 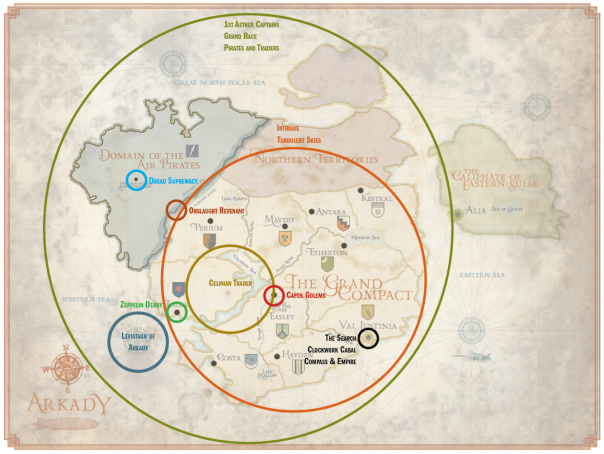 Bonus: a map of the Aether Captains world!

It’s rather light, but like many of Todd Sanders’ other games, you can print it on a few sheets of paper, plus one sheet for every player. Other than that, you just need a handful of dice and you’re off, outfitted with a great filler game that cost you exactly nothing.

I doubt I’ll get to any of the other Aether Captains titles anytime soon, but my time with these three has been well-spent. Now go, and print, and enjoy.