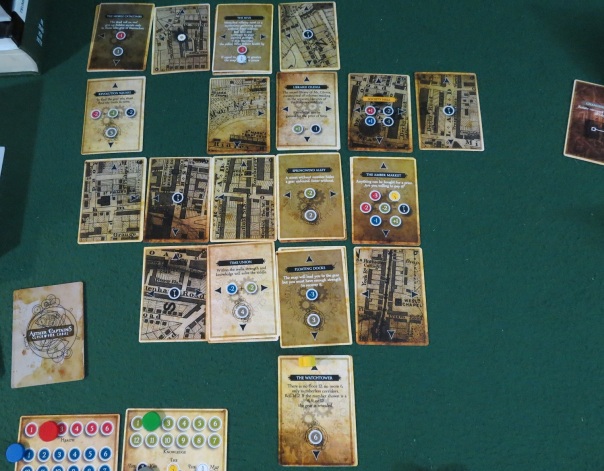 As anyone who’s ever lived in one can tell you, a city is a constantly shifting thing. Dynamic. Ever-moving. Even here in tiny Salt Lake City, where the streets are an orderly grid strung reliably outwards from Temple Square, we can’t do a damn thing to get the farmer’s market to settle down in one place. You want fresh carrots and kitschy crafts? You gotta go find ’em.

At its core, Clockwork Cabal is about a city.

Oh, it’ll tell you something different. It will mislead you. The game’s introductory lore-blurb goes on about how you’re a free captain, a member of a steampunk engineering society, and how you’re racing through the changing streets of Val Justinia to assemble some unpronouncable artifact (the “Antikythera” — let’s hear you say it out loud) before the shadowy Clockwork Cabal, allied with the nefarious Air Pirates, beats you to it.

But all that? It’s a ruse. A reason to move through Val Justinia, because, as in real life, you need a pretty compelling reason to leave the house and go exploring. For most of us, it’s because we’re running low on deodorant and Tyson chicken. For a free captain of the Society of Clockwork Engineers, it’s because the Air Pirates will use the Antikythera to circumnavigate the globe and attack the Grand Compact from the other side. Which maybe sounds like the silliest plan this side of elephants in the Alps, but hey, it’s a reason to go outside and breathe in the ripe stink of Val Justinia.

As such, there are two components to Clockwork Cabal. One of them is incredibly awesome. The other… well, it’s alright.

The first, awesome part is the bit where you explore the city of Val Justinia, beginning on the steps of your order’s Society Hall and not resting until you find all six pieces of the Antikywhatever. Each “hour,” you travel to a new block, the city expanding outwards as you travel. It throws up roadblocks and opportunities with equal generosity: at one step, buying knickknacks at the Amber Market, like a key to the city’s catacomb shortcuts; at the next, beat senseless by wretched villainy in the Hive.

This component of the game intimately understands the human itch to discover. Each movement uncovers new mysteries, and each enigma is a joy — even if it’s a cabal ambush that leaves you bruised and dripping blood into the gutter. Flipping over Val Justinian’s beautifully-rendered secrets, and piling even more secrets atop that initial stratum, captures the thrill of pulling back the drapes that separate your experience from the rest of the world; of charting the unknown until that moment when, all at once, it’s known.

And for that part of the game, it’s the journey, not the destination, that matters.

Unfortunately, the second part of the game isn’t quite as refined. The actual search for the circumnavigation artifact feels less imaginative, less thrilling. You’ll discover a place — Revolution Square, for instance — and expend health, or time, or strength, or knowledge, or some combination of these, to acquire one of the device’s components. There’s nothing more to it. The sole challenge comes in the form of two of the game’s resources, your waning health and the time before the clockwork cabal finds the device, the mismanagement of which will result in failure. But health is easily recovered by chilling at the Society Hall for a few hours, and you’ve got a comfortable sixty hours before your enemy decodes the Antikythera’s code, so unless you have a serious run of bad luck, you’re going to beat Clockwork Cabal by a significant margin. 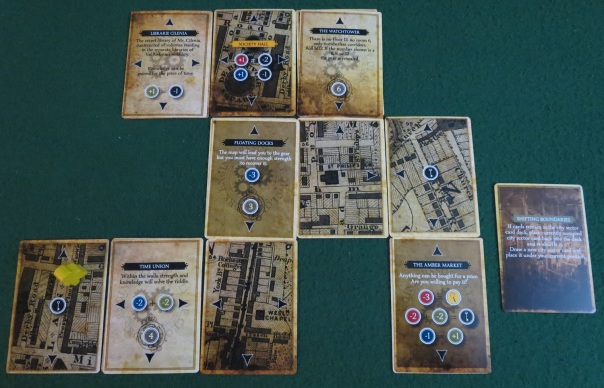 The biggest problem with Clockwork Cabal is that the first word to spring to mind upon completing a game is “autopilot.” It plays itself, with you along for the ride, and so long as you keep the map centered around the Society Hall and refrain from flubbing your resource management in the direst manner possible, you’re going to win.

Even so, that initial part of Clockwork Cabal is a fascinating ride. It doesn’t bear multiple plays particularly well (the problem with any game about exploration is that you can’t really explore a thing twice), but it’s interesting while it lasts. Somerset wanted me to include the detail that she really felt like a clockwork engineer, running through the streets of Val Justinia in coattails, top hat, monocle, and cane, desperate to solve the artifact’s riddle before the clockwork cabal caught up and solved hers. She recommends Clockwork Cabal; I do so as well, though tentatively, and on the condition that you play some of Todd’s other more fleshed-out games first.

On page four, we’ll talk about a multiplayer game called Dread Supremacy, which maybe is heresy in an Alone Time article, but hey, it’s the game I had, and it’s compact enough that it hardly warrants its own article.