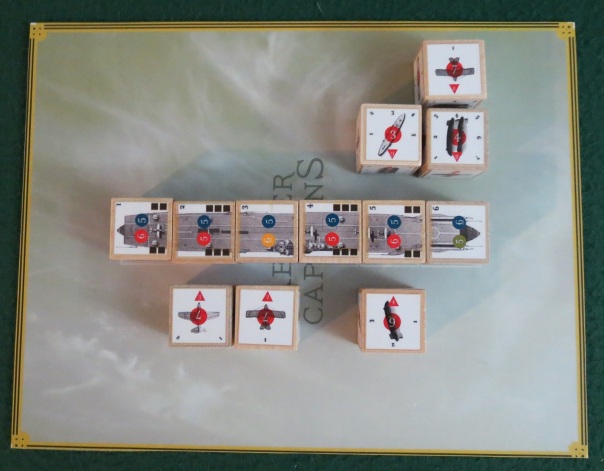 The HMS Dauntless encounters a band of Air Pirates.

Of the three titles I’m reviewing today, I actually played in reverse order of what I’ve printed here, beginning with the two-to-four player Dread Supremacy, then the solo Clockwork Cabal, and then on back to their progenitor, the original Aether Captains. We’ll take a more in-depth look at those other two in short order; suffice it to say, I was planning on this article being about how Todd’s early efforts, despite being rather good, were definitely a little rougher than the stuff he would later (and continues to) produce. Both later titles show great promise rather than a fulfillment of that promise, more whimsical experiments than fully fleshed-out designs.

Aether Captains, though? This is the second game Todd Sanders ever designed (after a handful of redesigns of other games and Nahua for a contest), and it’s every bit as good as his later efforts.

In part that’s because, beneath the hood, Aether Captains is built on an incredibly malleable system. Unlike some of Todd’s other games, which take place during a concrete moment in his worlds’ histories — the pirate contest of Dread Supremacy, the National Treasure-esque artifact hunt through the imperial capital in Clockwork Cabal, and the sieges and battles from the  Shadows Upon Lassadar series — Aether Captains spans the course of many places and many times.

You’re cast as the commander of the ‘HMS Dauntless‘ a patrol vessel whose mission is to quell the threat the merciless Air Pirates pose to the Grand Compact. This means that, provided you survive the encounters, each game is one more fight in a long string of battles as your worthy vessel is time and time again assaulted by pirate ships. Each clash begins with a random setup of rolled pirate dice, which determines the composition and placement of your nemeses. One day you’ll be strafed from every direction by nimble Steamravens. The next you’ll engage in a broadside standoff against heavy Double Zeppelins. No two fights are the same, assembled as they are from a diverse enemy force that can attack your ship from multiple directions.

The HMS Dauntless has only sustained minor damage.

The gameplay itself is remarkably simple. After the (sometimes lengthy) Air Pirate attack and opportunity to shift positions, their shells either pinging off your armor or cracking through the hull and weakening your gun emplacements, it’s your turn to either return fire or use your engines to reposition your guns. It’s dice-driven, and the whims of luck can sail you or sink you as surely as in any dice game, though there’s plenty you can do to mitigate the odds. Differing gun ranges mean you can prioritize which targets to take out, the decision of whether to trundle your battleship to a more opportune position at the expense of firing is often tempting, and the constantly shifting pool of available crew offers new advantages and handicaps each round. One moment your Diplomat will be on the horn bribing an enemy Skystinger into pulling back as bad weather impedes your firing arcs; the very next your Able Crew will fight like wildmen to protect a surprise passenger (the Emperor’s Niece, oh no!); and minutes later an enemy Saboteur will have hindered all your efforts while the Engineer struggles to get the ship put back together again. It’s gripping, narratively pleasing stuff, every bit as vivid and beautiful and challenging as anything set in the Lassadar universe.

As I said above, this system is deliciously malleable, and there are already a number of miniature expansions to prove it. Tired of the same six pirate vessels attacking the HMS Dauntless? Enter the Brass Dagger, proof that the Air Pirates are now fielding frigates of their own, and it’s more than capable of punching extra holes in your hide. Want more of a challenge? Tremble as Revenants, the tortured husks of Air Pirate prisoners, board your ship to keep your crew too occupied to man the guns, fuel the engines, or make repairs. Want more variety? Add a second crew die to the mix. Sick of the HMS Dauntless herself? Swap her out for the sleeker HMS Dominion or an easy-to-surround Corsair Class vessel.

It’s not surprising to discover that a Todd Sanders game is slick, but I wasn’t expecting a fine wax shine to the game that’s essentially his sophomore effort. Aether Captains now ranks as one of my two favorite of his games, a worthy predecessor to many of his finest designs.

On page three, let’s take a look at another of those. This time it’s Clockwork Cabal, an experimental game, and it couldn’t be more different from the gameplay set forth in Aether Captains.