Conquest of Elysium 3 is…

A picture of Conquest of Elysium 3. Look at all the scary data. What does it mean? Does anyone know?

I’ve been playing and talking a lot about Conquest of Elysium 3 from Illwinter Game Design, the two-man band responsible for Dominions 3. My review? It’s great: simple to learn, plenty of depth, and lots of options for customization so you can play the game you’re in the mood for.

However, it hasn’t been widely reviewed, and lots of folks seem confused about what it is—one review so completely that I couldn’t help but poke some fun at it. I understand this response—its visual style requires some acclimatizing, and it looks like it could be one of those impenetrable stats-based games that you once bought as a kid because you heard you could do anything but then it turned out you couldn’t even figure out how to build a cavalry regiment.

Have no fear! CoE3 is not one of those games. But rather than define what it isn’t, I’ve made a handy list of four things that sum up what Conquest of Elysium 3 is all about. If that doesn’t interest you, you can make like an IGN reader and skip to the end for the final score.

END_OF_DOCUMENT_TOKEN_TO_BE_REPLACED 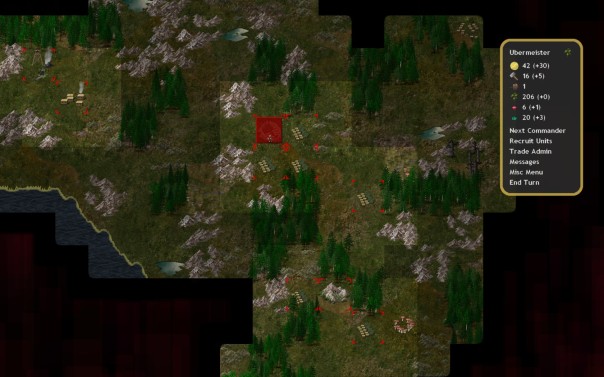 The beginnings of a very profitable Hoburg Weed growing enterprise. The little towns with green fields are hoburg villages. They grow, well, you can guess.

I’ve recently been playing a lot of Conquest of Elysium 3, the new game from Illwinter Game Design, who you might recognize as the creators of Dominions 3. Today I’m playing as the Burgmeister, a leader among halfmen.

It isn’t easy being a halfman, even if you have managed to join up with the Hoburgs. You have to put up with the worst sort of ridicule, and those short legs aren’t taking you anywhere fast. At best you have 4 hitpoints—and chances are you’ve got fewer. Even most human archers have 7, and beefcakes can work up to more than double that.

Yessir, life as a Hoburg sure would stink if it weren’t for fine Hoburg Weed.

END_OF_DOCUMENT_TOKEN_TO_BE_REPLACED

How to Pose as an Indie Reviewer

Conquest of Elysium 3, a typical indie game. As in, not AAA.

It’s hard to jumpstart a career as a AAA reviewer these days. The market is competitive, and the whole reason you play eighteen hours of games a day means that “competitive” sounds about as appealing as licking a plantar wart.

Have no fear! By following these 20 easy steps, you too can soon be reviewing indie games with the best of them. As we go along, we’ll take a look at an actual review of an indie game as an example of how to pose as an indie reviewer (Conquest of Elysium 3 review, found here).