Greece Fire: A Look at Omen

If you’ve been following Space-Biff! for more than a Thermopylae minute, you’ll know that I’ve mentioned Omen: A Reign of War once or twice. This is one of those rare games that opens with a bang and just keeps going, producing more kicks per minute than a two-story dojo. Now its creator, John Clowdus, has signed with Kolossal to give his small-box classic a bigger-box treatment, including a third entry in the series that steps away from the warring demigods of Greece and toward the warring demigods of Persia. So, you know, it’s super original.

Anyway, what makes Omen such a great game? Let’s take a look.

Deep in its war-drum heart, Omen has always been a game of hand management and tempo control, and there are very few games that do either so smoothly.

Let’s start with hand management. The first thing you need to know is that everything you do hinges on two resources, cards and coins. Without cards, you won’t have any muscle — every single offering represents a warrior, merchant, or mythological monster, all of whom will gladly do your bidding for the right price — and coins are, well, how you pay for them.

As is the case in every hand management game worth its salt, neither of these resources are plentiful enough to give you much breathing room. In fact, it’s extremely rare that you’ll be comfortably padded in both economies at once. This is partially because you can only hold onto a few cards and coins at the end of each round, forcing both players into an ongoing use-it-or-lose-it mentality, and partially because Omen pulls one devious trick after another to ensure that you’re never entirely able to remain flush. For example, every one of your turns opens with a brisk wealth step, where you’re free to gather any combination of three cards and coins. Sounds nice, right? Nobody’s going to turn down freebies like those. The rub, though, is that if you take nothing but cards, you’re allowed to pull an extra one. Same goes for coins. Just like that, you’re encouraged to go all-in on one resource at the expense of another. A bounty in one hand, famine in the other.

This doesn’t mean that it’s impossible to play your cards carefully and come out ahead, just that it’s difficult. In fact, that’s the second thing Omen excels at: tempo control. Every one of those cards you’re drawing boasts some sort of ability, and they’re famously mean, potentially letting you upend the status of the table’s three cities that you’re hoping to plunder. If selected, deployed, and manipulated carefully, it’s possible to rob your opponent of even their surest footing and swing fate back into your favor.

Here’s an example from one recent match that left my opponent bug-eyed and red-eared. This opponent, who we’ll call Geoff to protect his anonymity, was doing great. He had a solid hand of cards, a healthy bankroll, and control of every city. For my wealth step, I was forced to split my selections between cards and coins, forgoing the freebie extra that I would have been entitled to if I’d planned ahead better.

No trouble. Three cards and five coins were all I needed. First out was a Serpent Peddler, a benign merchant who was weak in combat and didn’t trigger immediately. My second card, though, was the Dark-Dune Lurker. If my purse was light enough (it was) he would take pity on my poverty by killing an enemy unit outright (he did). Fortunately, though, I came into some extra coin with Apsu’s Deluge, a reward tile I’d plundered from a previous sacking. Using the deluge decreased its point value, but gave me two more pennies to rub together. With my newfound beggar’s fortune, I made quick use of my Oath Caller. When this hottie walked into a city on her own, she was allowed to bring a friend from next door; in this case, the Desperate Hunter I’d deployed last round. The hunter ran over and stole one of Geoff’s troops out of that city and straight into my hand. I was out of cash, but Geoff had lost two of his best units, the tide of one battle had swung into my favor, and then, to rub salt into his wounds, that aforementioned Serpent Peddler stole half his cash.

Like many of the best plays in Omen, that move didn’t stem from a position of leveraged strength. It came specifically from a position of weakness. With the right units, timing, and planning, the entire course of a losing war was thrown into reverse.

In A Reign of War, feats rule the day. In the sequels, there are other scoring options to pursue.

Your main source of points comes from reward tiles, dredged out of sacked cities after a victorious battle. These clashes are more about preparation than any last-minute trickery, and the side that flexes the swoller pecs will rule the day. Newcomers sometimes find themselves a bit lost over when battles actually occur — the rule is that a fight goes down if your opponent has three units in a city or if there are five units hanging around on both sides combined. But the takeaway is that you’re encouraged to carefully meter out your troops, as hordes of economic units might make you rich while also handing reward tiles to your nemesis. Then again, the inverse is also true, with too many heavy-hitters quickly draining your reserves of cash and cards, and letting your opponent choose when and where the battles occur at all.

In addition to reward tiles, each version of Omen sports its own additional way to pick up points. In the original A Reign of War, this comes in the form of feats, tasks from the gods like setting up a certain type of unit in each city or drawing a bunch of cards. Edge of the Aegean and Fires in the East both turn this duty over to particular units who act a little bit like investments, albeit investments whose points-scoring abilities might never trigger if they’re assassinated first. A priestess, for example, will perform a grody little ritual if you sacrifice the right card, while a sphinx or moirai will be worth a point if they’re still in your hand at the end of the game, adding yet another layer to consider.

It’s in that bombardment of considerations that Omen hits its stride. Should you use that sphinx to dominate a city, or let it jam up your hand because the game might end next round? Focus on economic units even though they’ll make it easier for your opponent to start a ruckus in that city? Who should you sacrifice because the gods are generous with their gifts, and who’s useful enough that you should keep them around for later? Can you risk diving into your opponent’s hand to discard an entire class of unit? For that matter, have you figured out your opponent’s plans, or is she planning something far worse than you’ve feared? Usually the latter, if we’re being honest. 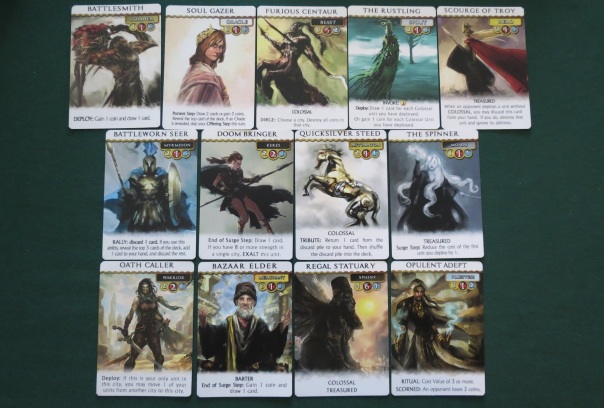 The beauty of Omen is that every round is full of tough decisions and unexpected reversals, yet a skilled player will roll with the punches and establish firm footing despite the whims of the draw deck. In general, expert play requires drafting, in which both sides create their own private pool of soldiers and monsters to recruit from. This isn’t currently possible with either of A Reign of War’s sequels, and mixing everything together dilutes the effectiveness of the base game’s feats. This is a bit of a disappointment, as the game is at its fighting trim when your deck is yours and there are multiple routes to success.

Then again, both sequels offer a more focused approach, and the units — oh man, the units. At this point in his career, Clowdus probably only has to fall asleep to dream up inventive new ways to let mythological figures stab each other in the guts, so effortless and clever are the ways they’re applied in each of these boxes. And each cast of characters is smarter than the last, Reign’s oracles (chancy but powerful!) outdone by Aegean’s keres (powerful and points-scoring!) which are further trumped by the straightforward benefits of East’s merchants (hand control bonuses!). Every time it feels like there’s nowhere else to go, the formula finds itself reinvented.

The point is, Omen is one of those rare two-player dueling games with enough muscle to hang around for years to come. Whenever another dueler hits the scene, it’s Omen: A Reign of War that I stack it up against. The sequels are slightly iffier — I’ve been told there’s more in the pipeline there, though I can’t comment on anything I haven’t seen — but Kolossal’s upcoming remaster of the original A Reign of War is the perfect opportunity for newcomers to experience one of the best dueling games ever designed.

The Omen saga will be on Kickstarter for the next 20 days.

(If what I’m doing at Space-Biff! is valuable to you in some way, please consider dropping by my Patreon campaign. Every contributor is more demigodly than the one before. Though only slightly.)

Posted on April 29, 2018, in Board Game and tagged Board Games, John Clowdus, Kolossal Games, Omen: A Reign of War, Omen: Edge of the Aegean, Omen: Fires in the East, Small Box Games, The Fruits of Kickstarter. Bookmark the permalink. 26 Comments.