Brock: Do you hear that? On the wind? It’s a whisper, drifting from the remotest corners of tabletop gamedom…

This time on Two Minds About, Dan and I take a look at Untold: Adventures Await, from designers John Fiore and Rory O’Connor. Did this box transport us to new worlds? Were we ensorcelled by its rapturous cardboard mendacity? Read on to find out!

Dan: If Untold isn’t a game, then the joke I was planning to tell later is going to fall flat.

Brock: There’s nothing flat about you, Dan. You’re all curves, baby!

You know what, Brock? Why don’t you lay some groundwork?

Brock: The first thing Untold wants you to know is that it makes use of Rory’s Story Cubes. Maybe you’ve seen these charming little d6s before, each with six unique sides, used variously as icebreakers, desk ornaments, or maybe for a round of Exquisite Corpse.

Dan: They’re quite charming. We once rolled a lightbulb, a scarab, an Illuminati pyramid, and other assorted bric-a-brac. They’re the kind of dice you buy to feel like you’re going to do something, then they hog space in your dice mug.

Brock: Everyone gets a few tokens and a player board, and the main game board is laid out with a pleasant panorama.

Dan: I suspect we know you set up the board, Brock. Move it along.

Brock: Okay, well then comes the part where you just, sort of, look at each other. Maybe someone shrugs and there’s an awkward laugh. The rules don’t tell you what kind of story to tell, how to win, or who goes first. Everyone needs to create a character, but the rulebook is very nearly mute on that subject as well.

Dan: I want to be a pelican.

Brock: I defy you to find something in the rules that says you can’t, because your goal is to tell a story with your friends. More specifically, you are going to tell an episode of a TV show, broken down into five distinct story chunks.

I believe chunks is the industry term.

Dan: Or squeegees. I learned that from a screenwriting Masterclass. Best $109 I’ve ever spent.

As I understand it — which is only vaguely, because Brock taught me how to play — these squeegees are as close as the game comes to formal rules. You take those dice, the ones showing, I dunno, a teepee or a confused face or a butt or whatever, and assign them to that scene’s empty slots. These are now abstract representations of various… acts? Actors? Both? In our post-apocalyptic pre-Western starring a theater trouper with Shakespeare on the tongue and a fur trapper with a heart of gold but loins of lust, we came across a pair of comet crazies besieging some friendly natives. Brock’s theater boy fell out of a tree while my trapper strangled the comet zombies with their own entrails.

Maybe it’s a testament to how well Untold worked that I remember every beat of that goofball story but can’t recall which dice resulted in that turn of events. 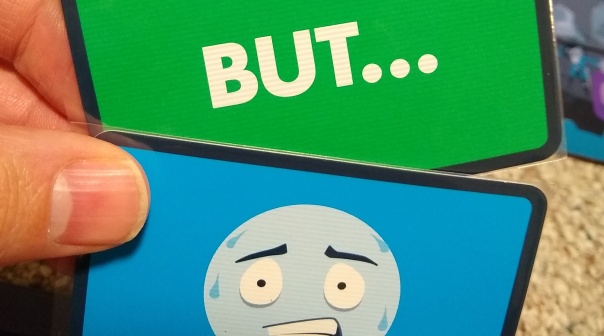 Brock: Next time we’ll do your time-traveling pelican story, I promise.

The thing is, my vague teaching was a product of the game itself. Actions are left entirely to the players’ imaginations rather than any defined list. There’s no turn order or time limit, no dedicated mechanic for asphyxiation by intestine. We spent a fair amount of time talking about geography and topography simply because those things would make our story more interesting and more defined in our minds.

As much as the dice are a crucial part of the experience, they fade into the background in a perfect way. They offer nudges and suggestions, then they hand you the reins and let you charge forward.

What do you think works about Untold?

Dan: I spend a lot of time thinking about stories. And like a lot of people who think about stories, there’s this fascinating line — sometimes a very thin line — between things that work and things that don’t. Say, a twist. What’s the difference between a twist that lands versus one that flops? It can be something as small as timing, or whether the author dropped enough (or too many) breadcrumbs, or how confident a particular character was feeling that morning.

Untold gets you thinking about the structure of stories. And not the meandering hunting stories your uncle tells every year at Thanksgiving. These are stories with ups and downs, recurring ideas, and moments of conflict both internal and external. You mentioned during our play that you’d used it to outline an actual story you went on to write. That can happen because it’s a game not only about flexing your imagination, but highlighting how good stories tend to use tried and true formats.

Brock: I think my favorite thing about Untold is how approachable it is, while still accomplishing something really special. It turns story consumers into story creators, in a way that few other tabletop experiences can do. I really did turn that game session into a short story, and I have plans for more in the future.

It may take a scene or two before the concept really clicks, but once it does it’s like falling feet-first into the magic circle. You’ll develop attachments to the characters, but also to the story. Players develop a kind of loyalty to the episode. Is this scene working? Does my character need to be more hurt or endangered? How could we make things more complicated and difficult? How often does a board game inspire those kinds of conversations?

Dan: That’s also the flipside, though. I’m thinking back on an article somebody wrote about how board games shouldn’t attempt narrative because RPGs will always produce a superior storyline. While that’s probably true, it’s also… a bit simple? Too pure? At the very least, it’s making a ton of assumptions. What if I can’t commit to an RPG group? What if everybody I know insists on being the GM? Crud, what if I don’t want to make up my own stories? Not everybody wants to put their time and imagination to use in the exact same way.

Maybe I’m playing devil’s advocate, because examining and making up stories is something I happen to enjoy rather thoroughly. Then again, in that regard, I’m not sure Untold is something I need. As fun as it was to assign ambiguous dice to slots and see the way our story took shape corporately between us, with some genuine surprises along the way, I doubt I’ll return to it again.

But it sounds like you have the opposite stance, Brock. Do you plan to continue using Untold as… what, an idea prompt?

Brock: I think I will hang onto it! I like the way it breaks the storytelling process into manageable pieces, and it’s a great way to shake things up when I’m trying to work out a story with just a few starting ideas.

But you make some very good points, and they are things I’ve pondered as well. If there’s a main problem I have with Untold, it’s that it asks a lot of its players. Sitting your group down and asking them to brainstorm a setting for a TV show, the tone and goals, the characters, on a casual game night? You might completely lose some people before the dice are even rolled. In some ways this is a light approach to an RPG, beautifully low-risk and low-investment. It doesn’t require you to read a rulebook or buy special dice.

At the same time, players are responsible for dreaming up every detail of the world, including consequences of success and failure. It’s narrative improv, and not everyone likes being put on the spot like that.

Tell me a story.

Dan: Like me, right now. Because I can’t think of anything else to say. Totally blank. That’s my brain.

Want to sum up?

Brock: While we failed to answer that important question of Untold’s inherent gameness, I don’t really care. Call it a light RPG, an improv exercise, a team building activity, or, like I do, a tactile fiction-enhancement paradigm framework.

Brock: Whatever the label, it’s a great way to weave a crazy story without a bunch of stuff getting in the way. Too pure? Maybe. But since when is that bad thing?

Posted on October 1, 2019, in Board Game and tagged Board Games, Hub Games, The Creativity Hub, Two Minds About..., Untold: Adventures Await. Bookmark the permalink. 2 Comments.