Betray Me Twice, Shame On Me

If you’ve been in this hobby long enough — or even if you haven’t — you’ve likely heard of Betrayal at House on the Hill. As an elevator pitch, it’s exactly the sort of thing that non-nerds might say appeals to actual-nerds. A mansion cobbled together from random tiles, scattershot with flipped cards and flavor text, and boasting a crescendo wherein somebody is transformed into one of oh so many monsters and pitted against their former fellows. Infinite games in one! You’ll never need another!

And now there’s a legacy version. Like a haunted carnival, the fun might never stop. They did say it was supposed to be horrific.

As a matter of necessity, reviewing Betrayal Legacy is really two reviews rolled into one. Betrayal. Legacy. Like some sort of incomprehensible divine being plummeted from heaven and twisted by the earthiness and carnality of this mortal realm, two as one, one as two, inseparable yet distinct. And quite possibly tentacled.

Let’s begin with the title’s first half. As a reconfiguring of that classic formula, Betrayal Legacy is immediately familiar. There are changes from the original, little additions and tweaks that will likely matter very much to fanatics of the original. More important, however, is the fact that this is Betrayal at House on the Hill, warts soothed but not remedied, rough edges sanded but still liable to snag the elbow of your jacket.

Think of it as a story in two acts. In the first, your hapless characters are explorers drawn to this unhallowed place and placed at the mercy of a random number generator. Tiles are flipped, then so too are cards overturned, and dice are rolled, and maybe your abilities grow or are hobbled, and perhaps items of power or terrible import are uncovered, and possibly the house’s denizens make themselves known. Or perhaps not. The possibilities aren’t endless, but their permutations are sufficiently astronomical that they might as well be. 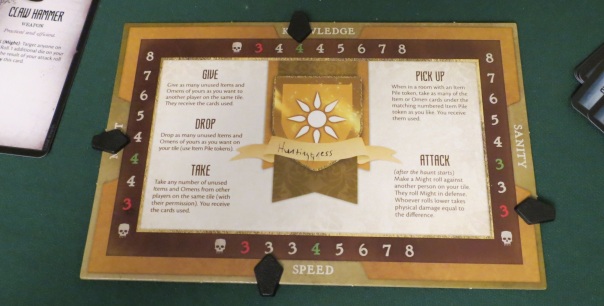 This generosity soon becomes a paradox. By burying you beneath so many occurrences — weapons sharp or dull, chambers deadly or tedious, whispers with teeth or merely a breeze — that it isn’t long before they’re robbed of meaning. It isn’t only that they’re a jumble, though that’s certainly the case. This house is haunted, and haunted thoroughly: floors creaking like broken knees and heads rolling down the stairs and fields sprouting blood and secret passageways wending past wicked shadows and ancient burial grounds sprouting tattooed fingers. But in addition to operating like the tension-building moments of a hundred scary films rolled into a single marathon locked on fast-forward, none of these events truly muster any bite. You explore a tile; something happens beyond your control. Every moment is an inhaled breath, yearning for that second act.

At the very least, the second act manages to snap the game into focus. The exploration is concluded and you flip open the book of haunts, selecting via eldritch criteria which tale you’ve been inhabiting all along. One unlucky player becomes a witch, or a possessed child, or an undead viking, or a squelchy blood-aerating mermaid. Everybody runs around screaming, putting their abilities and items and the layout of the house to good purpose, and either the monster or the explorers emerge victorious. Likely after some player elimination.

It’s wild, silly, and every bit as capricious as the first half of the game. The problem was (and still is, to some extent) one of imbalance. For every well-considered haunt, the original contained two that were poorly written, or broken, or too dependent on such-and-such having happened earlier. Fanatics of the original will assuage you with cultist’s whispers that this is a ferryman’s bargain. After all, a session only consumes an hour or so. Who cares if you immediately dispelled the house’s resident poltergeist without sustaining so much as a bruise when the whole experience lasted less than your lunch break?

Betrayal at House on the Hill was divisive for a reason. And Betrayal Legacy doesn’t fully shore up any of its wobbles. You’d have to strip out the bones to do that, and then it wouldn’t be Betrayal.

The legacy elements add narrative twists. Some are surprisingly effective.

But that’s the Betrayal half of the review. We’ve yet to discuss the Legacy. And I’ll say this right up front: while I can barely stomach the game itself, its persistent elements are some of the most interesting I’ve ever played.

The gist is this. There’s this haunted house on a hill. But rather than luring a single batch of explorers to masticate, this house is a multi-generational maw, drawing the same family into its orbit across decades and eventually centuries. You enter, rummage around, endure the whims of its decks and tiles, and then somebody turns coat and tries to kill everyone else. So far, so familiar. And probably not a cute familiar, like a cat with undersized bat’s wings.

But like many legacy games, the truly interesting stuff is what happens afterward. New rules are revealed. Cards are torn to shreds while others are added to replace them. Your character records their fate, then either passes their foul inheritance onto another member of their ill-begotten lineage or grows older, destined to return to the same besmirched geography years down the road. Like a history of abuse, this thing perpetuates itself in cycles.

I also would like to discover a “blood field.”

At its best, Rob Daviau’s adaptation even toys with our expectations as players of games. Not all the time, mind you — for the most part, the tale proceeds as you’d expect, all dire hillbillies and glowing runestones and foul ambered blood beneath the surface of the golden topsoil. Tropes are embraced, and not all of the game’s authors are equally up to the task, either literarily or as constructors of a haunt’s subset of rules. Imbalances still abound, often leaving a traitor flailing impotently or a group of explorers slaughtered with nary a chance. Once, the same player was unlucky enough to be appointed the betrayer twice in a row, and both with rules that barely equipped him to defeat a paralytic child, let alone a crack team of crossbow-wielding monster slayers.

But every so often, Betrayal Legacy caught me off guard with its inventiveness, or by subverting how I expect a game of this stripe to behave. I won’t deign to spoil anything, but there were moments that made me laugh and others that made me growl. Again, not often. But often enough that it’s proof that the creator of the legacy game still grips a dagger in his left hand.

The final product represents a second paradox. On the one hand, the bones of Betrayal at House on the Hill are as infirm as ever, passing time without imbuing it with any real meaning. Strange and portentous things happen, but they happen around you, to you, and only rarely invite your input. It may seem true to a tale of horror that your destiny was struck by some force beyond your ken, but there’s little sense that you did anything to earn your fate. Even the usual cinematic terrible decisions don’t hold much sway. Who cares if you split up, or touch that glowing rock, or repeat the words whispered to you from that ornate box, if there’s never any concept of who will turn or what monstrosity will soon be pursuing you through these hallways?

Then there’s the other hand. Betrayal was always about discovery, about the unpeeling of a mystery that made no sense to the small minds inhabiting it. Even better that it was unreservedly silly, a balm to the senselessness of it all. In that regard, this feels like Betrayal as it always should have been, a remake so faithful that it erases the original from memory. Its discoveries are vaster, its twists more considered, its absurdities doubled-down.

In other words, it will persuade precisely nobody. This is Betrayal, lurching with the same rigor mortis that marked its previous incarnations. This is Legacy, performed with a master’s touch. Both at once. If you were hoping it would bend to your will, producing a game that was either less stilted or less interesting, its cracked lips part and whisper, “Non serviam.”

Posted on February 21, 2019, in Board Game and tagged Avalon Hill, Betrayal Legacy, Board Games. Bookmark the permalink. 2 Comments.