← The Compromises of This Guilty Land
Best Week 2018: The Revitalized! →

The problem with colonialism in board games is that it’s such a good fit. Exploration! Discovery! Conflict! The race between nations! Filling up the world with your chosen color! Heaps of resource tokens and/or cards! Negotiation and trade! Eventually somebody glances longingly at a railroad! No wonder you can hardly enter a game store without tripping over a dozen of the things. European colonialism is basically the Original 4X Game.

Which is why I skipped out on Endeavor the first time around. “Looks like more cardboard colonialism,” I shrugged. Not because cardboard colonialism offends me. But because it’s generally so dull and so carefully purged of anything that might offend. When I use the term “whitewashed,” I mean it in two senses.

It begins in Europe…

Let’s start with the basics. Which is an easy task, because the basics of Endeavor are refreshingly simple:

Place a disc. Take a token.

There are different ways to place a disc, but that format will hold true for nearly everything you do in Endeavor. There are different actions for claiming cities, opening trade missions in far-flung continents, and picking up asset cards — which are basically tokens but better — but every action is alike in that it picks up the token in your chosen spot and adds it to your board. As easy as spitting, your nation’s capacity for building buildings, or propagating culture, or amassing wealth, or whatever has gone up. Where once there were resources or skills or labor, they’re now yours. Why? Because you played the action, duh. To play Endeavor is to engage in that offhanded understanding that everything belongs to you if only you bother to take it.

Also, Endeavor doesn’t miss the implications of that “labor.” But we’ll come back to that.

Don’t let the simplicity fool you into thinking there’s any such thing as an obvious move. If anything, it means there isn’t anything getting in the way of making the hard decisions. There’s no blaming the rules when the rules boil down to “put a disc on the map.”

At one level, you’re picking an upgrade. You want better buildings, which enable better actions, so it’s tempting to nab industry. But culture provides additional workers to take those actions and claim tokens, while wealth pays your workers to work harder and more often. Even influence, which initially seems like the runty stepbrother of the resource family, is what enables you to pick up and keep those tempting asset cards. And then there are the tokens that award a free action. Whatever the option, it’s essential to determine what your empire needs at any given moment. But because your placement options are limited, especially early on before the world has been explored and later once everything has been divvied up, not everything will be available all the time.

At a deeper level, your discs also carry significant import as the game continues. Opening trade in a new region, for example, is about far more than just grabbing a token. When a region’s trade track fills up, whichever empire has invested the most into it will become the regional governor. Like asset cards, these are plus-sized bonuses capable of awarding multiple resources at once. Even more importantly, everyone on the trade track is now present in that region, which means they’re free to gobble up those newly-opened cities. And their position matters, because the routes between cities award yet another token — though only if you control the cities on both sides. There’s a reason the attack action is sometimes worth its high cost in discarded manpower.

Simple, sure. Simplistic, anything but. Thanks to the transparency of the stakes, every decision carries enough weight to sink a man-of-war. Not the jellyfish. The frigate. Taking a particular city can spark a long-standing feud with one of your rivals, while monopolizing shipping connections out of Europe can award loads of tokens and points. Or maybe you’d rather venture onto distant shores and gluttonize all that unclaimed territory as soon as it’s uncovered. 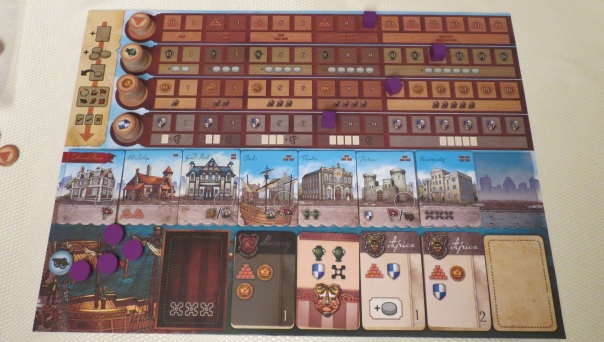 Over time, your empire reaps the spoils of, um, “trade.”

Unlike most games about colonialism, Endeavor is also willing to stare some of its subject matter’s uglier aspects right in the eye. Unrestrained acquisition and conquest, yes, but also slavery.

I’ve mentioned asset cards. In the tradition of the rest of Endeavor’s actions, picking one up isn’t all that difficult. Have enough discs in one of the map’s seven regions and you gain access to its deck. Accumulate more discs in that region to unlock more powerful cards.

But in addition to region decks, there’s also a slavery deck, tied to your strength in Europe. At first it’s an easy thing, a tempting thing, to grab one or two slavery cards to pad the resources you’ve been pillaging around the globe. After all, you’re already brokering influence in Europe. And slavery tends to generate industry, which lets you gain powerful buildings earlier than normal. The game even eases you into the decision by letting you hold a single slavery card that doesn’t count against your limit. There may not be any such thing as free labor, but cheap? That’s the whole point.

On its own, a slavery deck could have come across as condoning the practice of trading people like objects. Encouraging it, even. After all, a game can’t rely on the compunctions of its players. If it allows something that confers an advantage, then that thing will happen, morality be damned.

Fortunately, Endeavor is mature enough to realize that, which is why slavery is an unstable time bomb. At the bottom of Europe’s deck — the asset deck, not the slavery deck — lies the possibility of emancipation. It requires a shedload of influence in Europe, and that all of the deck’s weaker cards get claimed first. But when triggered, it forces every slaver at the table to lose all of their slavery bonuses — plus some precious points. The heritage of something like slavery doesn’t just wash out.

Of course, this might not happen. Slavery can continue apace straight into scoring. Slaveholders can protect their interests by feuding with abolitionists for preeminence in Europe. Either way, the possibility of emancipation adds enough sting to slavery that it isn’t always a foregone conclusion. If anything, fighting to retain your “property” might represent a distraction from your efforts abroad. In a game where actions are at a premium, bickering over a few influence points back home might be enough to sink your final score. The result is a dangerously loaded mechanic, confronting the reality of forced labor while also offering a means to punch back at those who take advantage of it.

That’s Endeavor. Now to talk about Age of Sail’s brand new exploits and why there’s no going back to the original.

Think of an exploit as a side board, with its own rules and components. Each one is tied to two of the game’s regions. As those regions are opened for business, their corresponding exploits become available, throwing new actions and abilities into the contest of nations. And here’s the cool part: there are fifteen of these babies, but each play will include only three. That’s just enough to feature some much-needed variety without overloading on complexity.

This variety, by the way, is handled with perfection. A play with Jesuits, Far East trading companies, and a Pirate Republic will feature Caribbean raids, privateer politics, blockades that must be broken to control India and China, and untouchable religious missions. But other plays might see you undertaking major voyages, wagering discs on joint-stock companies, supporting or suppressing a revolution, or seeking emancipation via the Underground Railroad.

There’s a great deal of joy to be found in seeing how each combination of exploits informs the gameplay, so I won’t spoil anything specific. But it’s important to note that these are totally transformative. Actions that were previously only spuriously useful by the game’s final act are now given new meaning, letting you seek your fortunes in exciting ways, while regions become more or less enticing because of their connection to an exploit. In one sense, exploits are the looking glass to Endeavor’s bird’s-eye investigation of colonialism, uncovering a slice of history and setting you loose within it.

With or without the exploits — though I recommend using them at every opportunity — Endeavor: Age of Sail is a rare example of cardboard colonialism with a conscience, weaving a surprisingly compelling tale of global expansion. Its rules are breezy but its decisions are tough, its playtime is fast but its impact is heavy. Right when I was thinking I could survive without colonizing anything ever again, Endeavor makes a case for the entire genre.

Posted on December 23, 2018, in Board Game and tagged Board Games, Endeavor: Age of Sail. Bookmark the permalink. 7 Comments.

← The Compromises of This Guilty Land
Best Week 2018: The Revitalized! →