Cute lets you get away with a lot. Think of Root, burying its class struggles and Foucauldian biopower beneath a gloss of skittish mice and adorably malevolent felines. Its revolution is as soggy with blood as they come, but you could miss it for all the awwwing.

Everdell is like that, except its cuteness isn’t a mask. Peel away the top layer and there’s more cuteness underneath. Animals preparing for winter, gathering berries and assembling shelter and establishing hierarchies and forming families. Feuding, but only playfully. Snuggling close when the first frosts appear. Cute all the way down. 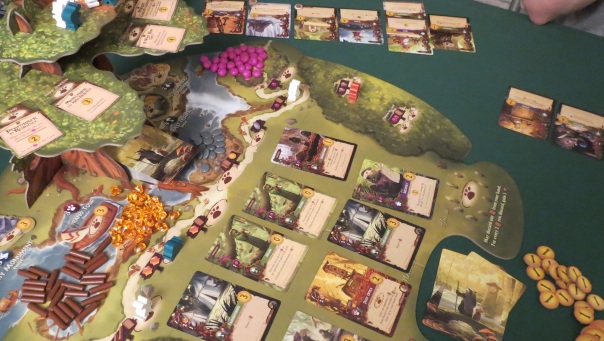 You know what? I’m not done talking about how cute this thing is.

Consider its play space. It has a board, that goes without saying. But it has a second layer, and a third, with spaces for objectives and a handful of spare critters, sitting high above the rest of the table in a cardboard tree. This tree isn’t necessary. Far from it. It isn’t even particularly useful. If anything, it clutters up the table and forces everyone to sit on three sides of the board rather than all four. But like everything else in Everdell, it serves a purpose, drawing the eye toward the game’s comforting visuals and away from any, ah, missteps.

That’s just the tree. Even the resources are adorable. Logs, crystalline lumps of resin, smooth river pebbles, squishy berries. You heard that right. The berries squish beneath the pressure of your fingers, complete with a supple rebound that always feels on the verge of popping.

And that’s before we even broach the topic of the gameplay. It’s cute in its own right, even though it revolves around moving cards and building synergies and all that usual board game jazz. 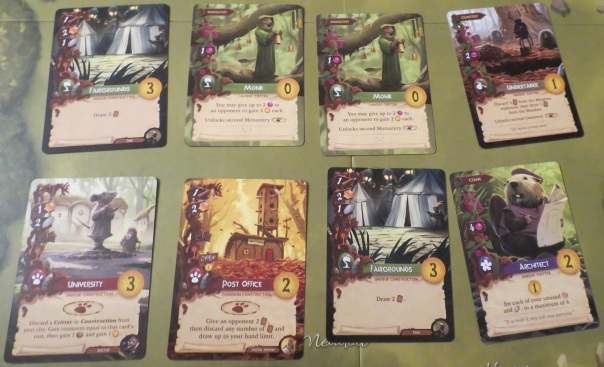 The cards in the meadow are available to everyone.

The idea is that you’re a pack of adorable woodland creatures trying to prepare for winter. And while Everdell isn’t actually about survival — winning is about amassing the most victory points, not enduring the cold season without resorting to dire measures — its turn by turn process comes down to two things, one serviceable and one sublime.

We’ll start with the serviceable. Each player has a small handful of critters, suitably cuddly, which can be deployed to the board’s various spaces to, well, do whatever you need. Gather stones, perhaps, or collect timber and a card, or accomplish an objective, or sacrifice the cruft from your hand for emergency resources. It’s worker placement, in other words, and it functions exactly as you’d expect if you’ve spent even an hour with the genre. Some spaces can only contain one critter while others can host entire garden parties, all hauling resources and cards and points back to the den.

The staples of worker placement are present and accounted for. When a desirable spot is occupied, you’ll need to adjust your next critter placement. But there are plenty of destinations, and playing with four adds even more, so it isn’t often that anybody will be seriously blocked. If anything, you’re less likely to find yourself scrambling for a particular spot than spending time assessing the board’s plentiful options. Most of the time, there are more destinations begging for your attention than late-game Waterdeep.

There’s one crucial twist, though it’s both a blessing and a curse. Once all of your critters have been sent on errands, it’s time to pick them up. In the process you also gain some new workers and an additional benefit, like triggering your harvest bonuses or nabbing some extra cards. Sounds pleasant, right?

Well, yes, most of the time. There’s no “end of season” phase or anything like that. Hit your limit on workers, choose to bring them home. The pacing lies on your shoulders, prompting you to spend turns on actions other than placing critters so that you can take advantage of that upcoming seasonal bonus. It’s beautifully streamlined.

The problem, though, is that the game doesn’t strike a conclusion, at least not at a single well-defined moment. Instead, winter arrives once everyone has taken their final season action. If you get stumped early, or run out of critters, or play with careful efficiency, it’s entirely possible that you’ll be done significantly earlier than the rest of the table. And that leaves you twiddling your paws while everyone else wraps up. Ever seen a bored badger? I have, and its name is Everdell.

But this is a minor complaint in the grand scheme of things, especially because Everdell’s second aspect is a total delight.

I mentioned actions besides sending critters to gather berries. These focus on your cards, and more than the worker placement stuff they’re the quickened heart of the wood. Every synergy, every bonus, every outpouring of points, the cards are where you’ll find them. And while you have a private hand to work from, everybody is also selecting cards from a common pool called the meadow.

When it comes to the cards themselves, there are two major divisions. Buildings are constructed from wood and resin and stone, while characters require berries before they’ll step into your tableau. The more important difference is that buildings can house characters, provided they match. A School, for example, lets you play a Teacher for free, while a Crane gives you an Architect, a Castle provides a King, and a Monastery billets a Monk. There are loads of these to consider, each with complementing abilities.

The tree is completely unnecessary.

Of course, the process isn’t as simple as playing buildings to earn free characters. You’ll spend genuine effort scratching out the right matches, both from the deck and the meadow. It’s telling that many of Everdell’s most intense frustrations are discovered in the meadow when somebody filches the exact card you were hunting for, usually only one turn before you could afford to buy it. Sometimes a well-timed character, even when they aren’t free, is just the thing your growing animal kingdom needs in its moment of need. Other times you’ll bounce from one to the other, seeming to conjure bonuses and cards out of thin air.

At its best — which Everdell often is — the cards are so finely tuned that the bonus from one will crack the door to something new, which in turn unlocks another gate, and so on and so on. A Twig Barge provides the necessary timber for a Farm, which shelters a Husband and Wife for loads of points. That School you built early on hasn’t yielded the points you hoped, so you use a Ruin to recoup your losses and erect a Palace in its place. The meadow is crowded with useless cards, so you employ an Undertaker to sweep it clean, then work your final critters to death in the Cemetery for a last-second gamble on some points. Somebody’s animal kingdom is overly mighty, so your Fairground sends a Fool to clog up their city and hee-haw away some of their score. Some options are more subtle than others, but everything has its place.

There’s a price to this bounty of options. The card text, and in particular the details about building/character pairs, is so microscopic that even the most eagle-eyed players will find themselves craning forward to decipher the meadow. There’s also an element of luck at play that will rankle some. Certain folks were born to draw every possible combination of buildings and characters, while others were destined to get nothing for free out of this mortal drudgery we call life.

But for the most part, these are just distractions from the good stuff. Flip on an extra lamp, don a pair of glasses, and take an action to dump your useless cards in favor of something else. It may not be the perfect solution, but it’ll work. Between all the cards in your hand and the meadow, there’s enough going on that you should be able to make something stick in your favor. With so many abilities, bonuses, and objectives, clever play is often rewarded in ways that aren’t immediately apparent.

When you get right down to it, Everdell is the easiest sort of game to love. While its worker placement doesn’t do anything new, it’s so eager to shower its players with cool cards and ways to combine them that its missteps begin to look like flourishes rather than stumbles. Although it stutters near the conclusion, its general tempo is carefully measured, every turn rewarding you with something new and exciting. I’d compare it to the steady outpouring of prizes from a Skinner Box, but in light of its setting that seems doubly inappropriate. Instead, I’ll just say that it’s pleasantly adorable from start to finish, leveraging both its cuddly cast and a shrewd sense for why we love bouncing cards off of each other.

Or maybe it’s simply too cute to criticize. Oh well. Considering the cavalcade of oh-so-grim titles that have appeared of late, the warmth of Everdell’s winsome earnestness is all the more precious.

(If what I’m doing at Space-Biff! is valuable to you in some way, please consider dropping by my Patreon campaign or Ko-fi. It’s support from readers like you that enables me to produce insightful written criticism about our favorite hobby).

Posted on November 20, 2018, in Board Game and tagged Board Games, Everdell, Starling Games, The Fruits of Kickstarter. Bookmark the permalink. 6 Comments.