It’s with the faintest hint of sadness that we arrive at the fifth and final day of Best Week 2018. Fortunately the sadness is fleeting, because I’ve compiled the five best hybrid games of the year. What’s a hybrid, you ask? Good question. These are the titles that take familiar systems and ideas and transform them into mutated monstrosities, some lurching and some sleek, some elegant and some trashy. Their sole commonality is that they’re all worthy of a look.

Take my hand. We’re almost there.

When it was announced that AuZtralia would be a thematic sequel to A Study in Emerald, I was giddy. Then my preview copy arrived and it was… this. A train game. Brrr. Also a game about colonizing Australia, except the indigenous had been greenwashed with Lovecraftian shoggoths. Cue my whuh? face.

Okay, so it doesn’t seem quite as conscious of its colonial roots as its spiritual predecessor was about anarchists hurling dynamite at European royalty. That’s a hard call to make, and maybe I’ll talk more about that dichotomy in the future. But as a game about pushing into maybe-hostile territory in order to lay rails, seed farms, and plunder natural resources, there aren’t many that do it better than AuZtralia.

Timing is everything. On two levels. First there’s the action track, where everything consumes time and can leave you waiting around as your rivals take a whole string of actions. Cleverly allotting your hours can mean the difference between raising an army, securing territory, and seeding crops over the battlefield, or… well, not doing those things, at least not with any efficiency. Throw in an enemy force with a time tracker of its own, and now you’re waging a back-and-forth frontier war. Which can be a testy proposition, because timing also comes into play during battle. Push harder to secure victory, and you risk sacrificing your expensive (and lengthily trained) soldiery. Sometimes a hasty retreat is in order. Other times, a retreat means you’ll waste more time getting back into position.

Either way, AuZtralia’s emphasis on timing forces even the smallest decisions to matter. You might even forget about those silly trains.

I wrote a preview of Auztralia, which you can read here. I’ll be writing more sometime in 2019.

As an adorable woodland creature, nearly the entire year is about preparing for winter. Also about placing workers and playing sick card combos.

There’s some depth to the worker placement, though it isn’t the standout half of the design. Your critters head out into the meadow to drag back twigs and resin and squishy berries. No, really, they’re squishy. Just one of the ways the production values are insanely cute. Even when they get in the way of sitting around the table, like that goofy ever-tree towering over the—

Sorry. As I was saying, the worker placement isn’t the highlight. Rather, the focus is on some of the smartest hand management I’ve had the pleasure of hand managing. Cards are broken into two broad categories, with structures providing shelter — and deep discounts — to your characters. Not only are you building combos, but also building them in the right order. You know you’re doing it right when new cards are springing into play for free.

The overall feel is pitch-perfect, from the delight of watching your village grow into a kingdom to the joy of having enough stones to construct a castle to house your royal family. There’s cute, and then there’s Everdell.

My review couldn’t shut up about the cuteness of the components.

What is John Company about? The elevator pitch gives it a certain dullness: “Managing the East India Company.” That was the yelp of your jaw coming unhinged from a python-esque yawn.

More accurately, though, it’s about being a terrific dick. As the head of an ambitious family, it’s your task to move up the ranks of the company, backstabbing and bribing all the way from bottom to top, grafting a few chests from the company coffers, and then retiring to a Scottish island. And then doing it again and again, one per family member, some of them sea captains and others enterprising governors or soldiers or superintendents, until your family’s name is as timeless as the Empire itself. It’s about prestige. It’s about family. And being a dick about it.

As you might expect, a silver tongue is a necessity. Whether you’re threatening to sink the company unless you get that promotion or bullying a weaker household into forming an independent company under your leadership, it pays to know when to open your mouth and when to clamp it. But that isn’t the only virtue to be embodied here. It also pays to honor your deals, if only to avoid legal trouble. Capable administrators will always be valued. And guessing when a portion of India is likely to succumb to civil war bestows a certain prescience, a trait that can be leveraged to enormous profits — or damages for your rivals.

But whatever the path to prosperity, it’s taken by force of tongue and spirit. And corruption. Lots of corruption.

You can read more about John Company over here.

Ah, the location-grabber. I’ve always had a soft spot for the simple straightforwardness of this type of game. Three locations, a fistful of cards, and a sharp enough eye to deploy them in the proper order. There’s a purity to the exercise that isn’t often recaptured.

Alf Seegert’s Haven takes that formula and wrestles it onto its ear. You’re still quibbling over three spots, but now they correspond to an entire map of locations. Every fight should be carefully assessed, with some more worthwhile than others. It’s possible to win the bulk of the battles and still lose the war. That’s obscenely cool.

Yet it’s still only scratching the surface of what Haven has to offer. The way fights are little press-your-luck minigames. The mixture of hidden and revealed information. The powers that totally upend the table state. The ways you can nudge a battle into resolving early, or accidentally trigger a fight before you’re prepared. The need to carefully parcel out your cards. The ability to match a trio of warriors to gain an artifact. The distinctive Ryan Laukat artwork.

The miracle of Haven, though, is that it all comes together into a cohesive whole. Rather than vomiting a sprawling mess of rules onto the table, every detail informs every other detail. It’s elegant, even. Before long, every fight is one more consideration, and every card a consideration within that. The result is one of the year’s most deceptively pretty titles.

I can tell you more right here! 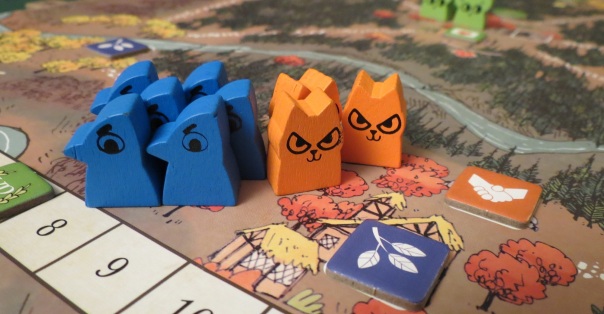 You aren’t surprised, are you?

Sure, Root is an obvious choice. On the other hand, it’s quite the accomplishment. From a design perspective alone, the wild asymmetry is something that deserves study. Each of the base game’s five factions, plus the expansion’s two, marches to the beat of its own drum. But by focusing on a shared foundation — movement, battle, scoring opportunities, control — it’s a far cry from the sky-high entry barrier of something like Vast: The Crystal Caverns. There’s asymmetry, sure. But each side has enough in common that the basics are always the same.

In fact, it’s surprisingly easy to teach, provided you’ve gone through it a time or two. The cats build structures and then police them; the birds establish a program and fly or fall by it; the Vagabond wins at the end; the Woodland Alliance rises from the underbrush to treat their oppressors to the guillotine. Speaking of the guillotine, did I mention that Root is also a weirdly potent teaching tool? All the commentary on how different factions embrace divergent goals, none of a wargame’s complexity.

Instead, the complexity is largely social, more about watching your rivals (like a hawk) and dragging them back (like a lobster) from the cusp of victory (like a weasel). In that regard, its shared heritage with John Company isn’t as surprising as it might first seem. Say one thing for Cole Wehrle, he sure knows how to dress up what he’s been thinking about in vibrant costumes.

Say another thing for Cole, it’s that he makes groundbreaking games. Smart designers will take note of how Root does asymmetry. It’s fast, fresh, and furious. And furry.

I reviewed both the base game and the expansion!

(If what I’m doing at Space-Biff! is valuable to you in some way, please consider dropping by my Patreon campaign or Ko-fi. And please share below which titles were your favorite hybrid designs of 2018!)

Posted on December 30, 2018, in Board Game and tagged Best Week!, Board Games, Space-Biff!. Bookmark the permalink. 3 Comments.