Riding high on last week’s look at HUE, the first installment in the first Pack O Games, we arrive at TKO. This one’s a boxing match for two, and it bears a striking resemblance to something else. 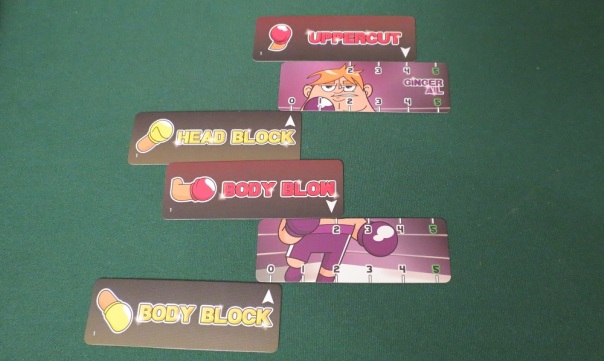 TKO features an interesting way of keeping track of blows.

I mean, not entirely. For one thing, it requires approximately five hundred percent more components — and that’s in a game the size of a few sticks of gum — and for another, it features none of the pleasing tactility of playing rock-paper-scissors. Besides, rock-paper-scissors is the sort of game that gets resorted to when you can’t decide whose turn it is to pay for lunch, not the grand finale of an evening of leisure.

Not that this should necessarily count as a ding against TKO. It’s merely uninspired, is all. To be fair, it does get plenty of mileage out of the idea, and it’s cute as hell to boot, featuring chubby little boxers and a totally superfluous champion belt, just in case you need to be handed something to confirm your victory. 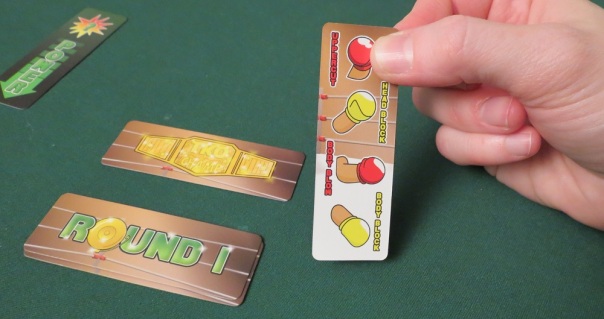 But we’re already getting ahead of ourselves.

Both players pick one of eight flubby boxers, each of whom sports their own bonuses — which in practice means they start with a couple victories under their belt in one area or another. The goal is to inch one of four tracks to the final pip, whether by landing blows to the head or body, or by blocking them. So one guy might start a match closer to winning via head shots, while another might be good at blocking. It’s pretty basic stuff, but it does give each boxer some slight tingle of flavor, like discovering a single mint leaf mixed in among a mouthful of raw spinach.

More importantly, what follows is a nice enough little duel. I know the adjective “little” is almost meaningless when talking about the Pack O Games, but I just can’t help it: both players pick up their little action selection card, pinch what they want to do, and reveal it. Landing punches unblocked earns points, blocking punches earns points, and… well, yeah, there you have it. First one to max out one of those little tracks takes the round.

There is a bit more strategy than your average game of rock-paper-scissors, especially once somebody starts closing in on that hallowed fifth pip. Will they keep pressing to win on another uppercut, or is that just feeding more block points to their opponent?

That said, yeah, it’s largely random and wholly pointless. Though don’t tell the people who actually play in rock-paper-scissors tournaments I said so. Those folks don’t seem like they need any more negativity in their lives.

All in all, TKO isn’t anything worth looking into. It’s cute but empty, mostly serving as a cluttered variant of one of the world’s quickest means of settling a dispute.

Posted on April 12, 2017, in Board Game and tagged Board Games, Pack O Game, Perplext, The Fruits of Kickstarter, TKO. Bookmark the permalink. 5 Comments.