At long last, Dan Thurot and Brock Poulsen debate the merits of Terraforming Mars, the game that took Argyre Planitia by storm. Is it good? Bad? Will it float? These are the questions that keep philosophers awake at night. 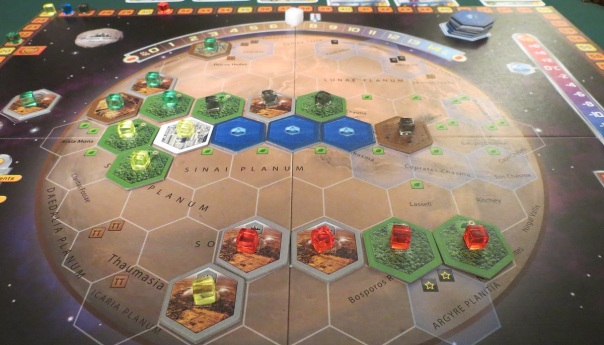 The opening salvo. Of terraforming.

Dan: Mars. It’s on everybody’s mind in this board gaming hobby of ours. You could say it’s the new pirates or zombies. Can’t get enough of it, until we all awake in the small hangover weeks of 2019 and realize that we’ve had it up to here with Mars. Then board games will go back to be about, I dunno, trading in the Mediterranean or something.

Terraforming Mars lands itself right in the middle of that zeitgeist, but I’m inclined to view it more favorably than as a mere hanger-on. Maybe that has to do with the fact that it’s sort of… well, defiantly douchey, to put it delicately. But maybe I’m getting ahead of myself. Brock, why don’t you introduce us to Terraforming Mars? And if you say, “You’re terraforming Mars,” I’m going to poop.

Brock: Get ready to change your drawers, Dan, because you’re going to terraform the pants off of the red planet.

Brock: Each player controls a sprawling corporation, sparing no expense or dirty trick to bring heat, oxygen, and water to our red neighbor. Your tableau of cards will grow as you inflict your will on Mars, from nurturing a bit of humble algae to redirecting a comet for a helpful collision.

To accomplish these feats, your corporation will use the currency of the future (Megabucks, of course), as well as wringing stores of steel and titanium from the very planet itself, all depicted with handfuls of lovely shiny cubes.

Dan: I think the crucial part of the setup, for me, is the “sprawling corporation.” If the whole thing were a hippy-dippy cooperative effort to make the red planet green, I’d vomit in my mouth. But it isn’t. It’s a game of corporate intrigue as much as anything. In addition to laying ocean and forest tiles, raising the average temperature, and holding hands around the greenhouse gas campfire, you’re also making custom viruses that kill off a competitor’s stockpile of plants, racing for premium territory, and managing crews of indentured workers.

Brock: You’ll collaborate in a Kumbaya kind of way, but always with the knowledge that your guitar-strumming pal would hack into your energy grid at the slightest provocation.

It’s almost as much about business management as it is about the science. And there is really a lot of delicious science. Every hand of cards feels like the rough outline of a hard sci-fi novel, crackling with potential ways to shape the planet. That comet I mentioned? Crashing it into the planet brings the benefits of water and raw metals, but the dust cloud it creates is going to kill some plant life.

Everything you do has an effect on your corporation and the planet, and everything comes at a cost. Like the best games, you’ll rarely have enough resources to do everything you want. You’ll need to specialize and focus, at the same time being willing to adjust your strategy.

In some ways, it’s like a super zoomed-in Race for the Galaxy. It has the same satisfying escalation, where later rounds will have you scanning your expanding tableau, tallying up your many bonuses and discounts. But where Race spans light years and strange alien civilizations, the close-quarters intimacy of Terraforming Mars can be satisfying in an entirely different way.

Dan: For me, the weird point of comparison is actually something like Pax Porfiriana. Which is maybe odd, holding up a relatively popular title against a more niche one, but that’s what I’m doing anyway. Because in both games, the cards themselves are the wild, uh, cards of the whole thing.

Dan: Like a hammer who’s good at metaphors. Basically, the cards in Pax Porfiriana act as little story generators, each representing businesses and opportunities and ways to mess with the framework of the game.

In Terraforming Mars, the cards serve functionally the same purpose. Acting as patents to be purchased and exploited, there are all sorts of little ways to mess with the game on these buggers. Special tiles come to litter the landscape, like nuclear zones, capital cities, and wilderness preserves. Homegrown tardigrades or household pets imported to Mars can transition from nice theories to serious generators of points given enough cultivation. While the game never entirely breaks away from its tile-laying center, the sheer variety of cards — and the planning needed to properly harness them — is what makes Terraforming Mars interesting.

The cards! Oh, the cards!

Brock: I also like (hate?) that you have to pay just to keep a card in your hand. Each round you draw four cards, but to keep any of them will cost you. Planning your conglomerate is crucial, and at times painful.

Dan: It might not seem like a lot at first, since it’s such a straightforward way of accumulating a hand, but it does give the sense that R&D has dreamed up a couple good ideas and it’s your job as CEO to decide whether they’re worth the investment. More functional than exciting, but it lets you get through the card-picking and into the action almost immediately.

Brock: The solo game really distills all of these strengths into a surprisingly satisfying diversion. It has a hard time limit of 14 generations—

Dan: That’s how you make me like a game. Just call your rounds “generations.” Insta-theme.

Brock:  —making your every action and choice bear enormous weight. The “dummy” corporation you compete against is little more than a punching bag for your corporate machinations, but the solitaire mode still manages to be tense and challenging. The goal is the same: you’ll need to bring oxygen, heat, and water to the planet, but now you’re on your own, every inch of Martian soil yours to turn into victory or (more likely) defeat.

Dan: I haven’t tried out the solo game yet. Would you recommend it on that basis? When it comes to multiplayer, one of the very considerable downsides here is that the game can drag a bit in the upper counts, mostly when playing with a full complement of five. Even more so when one of them is Geoff. My goodness, plan your turn in advance.

Brock: Seriously, don’t be a Geoff.

I have a hard time with recommending a game just for solo, especially one that is a bit more of an investment. I do think Terraforming Mars fills some particular niches, being a tableau and engine builder, and does both quite competently. With the time limit, the solo game won’t drag on for too long, even as your options expand toward the end.

Dan: Before we get into recommending or not-recommending, is there anything that stands out as a downside? Because I have a doozy.

Okay. Here is it. I can already hear some people lighting their torches and sharpening their pitchforks. Is that something you do with a pitchfork? Sharpen it?

Brock: How else will it pierce the thick skin of a board game reviewer?

Dan: Like my thick skin, I wish the game were a little tighter. As it stands, there are so many ways to earn points that it can sometimes feel unfocused. Actually terraforming Mars? Sure, increasing the red planet’s temperature, oxygen, and water will do that. But so will many, many cards. And the placement of your city and forest tiles. And whether you competed on certain milestones and awards. Let that sink in: milestones and awards are two different things that you must compete over.

On the one hand, it’s nice that different corporations can focus on different strengths. But on the other, it sometimes lends the proceedings a directionless feel. Rather than bringing everyone into direct competition, it’s possible for one guy to be breeding cattle and harvesting fungus, while someone else plants trees, while a third dude just focuses on unlocking milestones. Not a huge complaint in the grand scheme of things, but one that niggles in the back of my mind all the same.

Brock: I agree with the sentiment about different strengths, but I think I view this particular point as less of a downside than you do. It feels like it provides players with a bit of breathing room, at least for the first few generations, before things get too crowded and you start having to sabotage your neighbor’s mining operations.

You’re right on the mark about the scattered point values, though. For the most part it feels like you’re directly rewarded for striving toward the ultimate goal of making Mars habitable, but there are some things that feel extraneous to that objective.

The game length also feels like it could quickly get out of hand, if you have a few players prone to mulling. There is just a lot of stuff to mull over, and while a wealth of options is one for the plus column, it also bears the risk of making a game seem as long as a trip to Mars.

Dan: As an example of both the length going a little long and the victory conditions occasionally veering into wonkiness, we had one game where somebody funded the “thermalist” award at the exact moment when nearly everybody at the table had an enormous stockpile of pent-up heat. Just like that, it was more worth it for everyone to hoard their thermal energy rather than exhaust it into the atmosphere. The only remaining criteria to complete our terraforming was the planetary temperature, so the game went on something like three extra generations just because nobody wanted to take themselves out of the running for that award.

That’s a bit of a corner case, but still an illustration of how easy it is to get caught up in the pursuit of points rather than actually doing your job.

Brock: One exceptionally minor drawback for me: I wish these thin player mats were Scythe-style double-thick cardboard, with indentations to track your production. Cubes are being moved around so often, one slip of these sausage fingers can spell absolute disaster.

Brock: These few quibbles aside, I feel comfortable recommending Terraforming Mars. It’s a solid entry in the welcome category of smart-stuff-as-games, joining the likes of Evolution and the Pax series. It makes me feel smarter just seeing it on my shelf.

Dan: I think I’d give it my recommendation as well, because most of my criticisms feel like our Grand Canyon laid out next to the Valles Marineris, or Mount Everest stacked up against Olympus Mons — tiny and insignificant. It’s a smart game, especially when it embraces its more far-flung concepts. I love that I can be building penal colonies and strip-mining the surface one moment, then planting a garden-state around my best city to earn a ton of points. That’s the good stuff.

Posted on April 7, 2017, in Board Game and tagged Board Games, Stronghold Games, Terraforming Mars, Two Minds About.... Bookmark the permalink. 3 Comments.