Easily one of the coolest things about Chris Handy’s Pack O Game has nothing to do with the fact that it’s eight games in one handy-dandy carrying case. Nor that the reception was warm enough to warrant a sequel set. Nor that each of the games has a cutesy three-letter title. Blah blah blah.

No, the coolest thing is that each of these games is literally the size of a pack of gum. And not one of those deluxe gum silos or gum diskettes, or wherever else you commercial teenagers with your ice breath and lack of shirts and easy sex are storing your gum. Rather, one of those tiny cardboard gum boxes that smells of spearmint and gets lost between the cushions. That’s where my real interest lies.

The wonderful things you can do with gum!

Before we begin, a brisk disclaimer.

We must always remember that we’re talking about a card game the size of a few sticks of gum, because there’s no way that isn’t going to limit the medium somewhat. If any of these wee games are good it will be a little bit like realizing that short people have anything to offer society. Which, as we all know, is quite the tall order, if you see what I did there.

Then again, Level 99’s Minigame Library was the birthplace of Pixel Tactics, and that’s an amazing game. It has something like ninety sequels. So bring it on.

When it comes to Pack O Game, HUE isn’t what you’d call amazing, but it’s definitely an encouraging start. A much better start, in fact, than I’d anticipated. To begin, each of its up to five players gets a few sticks of color. Some are striped lengthwise, others edgewise, but every card will have three colors. And it’s with these colors that you’ll create, one strip at a time, a patchwork of neon lights that will set even the most resolute of eyeballs to the task of desperately focusing and unfocusing in an effort to make sense of its Skittles-commercial layout.

The rules are straightforward. You can cover up a little bit of a previous card, but not much, or just lay your card next to something that’s already there. Everyone has a “poison” card that they can use to mess with a block of color — a crucial gumdrop of chicanery, because your goal is to create solid blocks of color. Which blocks of color, you ask? Good question. Basically, the three colors on your last remaining card, which you’ll keep as a scoring rubric. The larger a particular color’s most spacious pool, the more points you score if it’s on your final card, and those points are doubled if it was your center color. Easy.

What isn’t quite as easy is the fact that HUE is a bit of a jerkwad. Since most colors will undoubtedly be pulling triple- or even quadruple-duty between your fellow players, you’re constantly trying to expand your favored colors, but never so much that someone with a particular color will sweep the scoring if it’s their main one. At the same time, you’re trying to minimize the value of the other colors entirely, whether by poisoning their greatest pool or by lopping them in half with an opportunistic card. 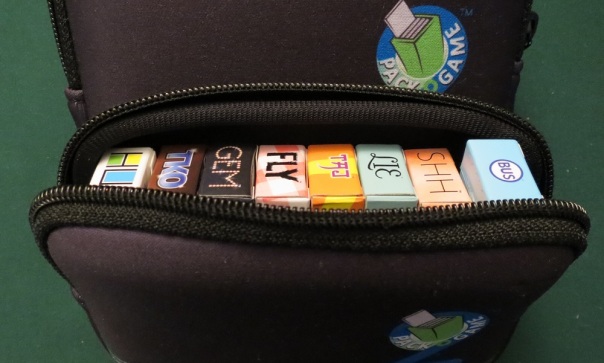 Perhaps the biggest compliment I can pay HUE is that it’s a game I might actually play if it were five times bigger. As a spatial puzzle and exercise in recognizing who’s ahead — especially since you can’t be certain whether a person is really favoring that color they just bumped — it’s about as good as anything else out there. Not that it should be bigger. If anything, this is the sort of game that perfectly fits the Pack O Game format. It’s small, simple, wraps up in ten minutes, and can be played on an airplane tray table or spread out on a hotel bedspread without losing even an ounce of what makes it so good.

As I said, HUE is an excellent start for Pack O Game. Next time, we’ll see if TKO continues the tradition.

Posted on April 4, 2017, in Board Game and tagged Board Games, HUE, Pack O Game, Perplext, The Fruits of Kickstarter. Bookmark the permalink. 5 Comments.