← In Space, No One Can Hear You Roll
From Dud to Dude →

In a lot of ways, the greatest feat of Trickerion: Legends of Illusion is that it highlights precisely why Kickstarter works as a platform for independent game ideas. Set in a city that just can’t get enough of magic and magicians, this original design by first-timers Richard Amann and Viktor Peter is all about the thrill of putting yourself out there, the joy of pulling off that impossible illusion, and the frustration that settles in at the bottom of your stomach when you watch your rival pull off that vanishing elephant trick before you. It’s also a risky project, complex and deep and occasionally infuriating. So let’s talk. 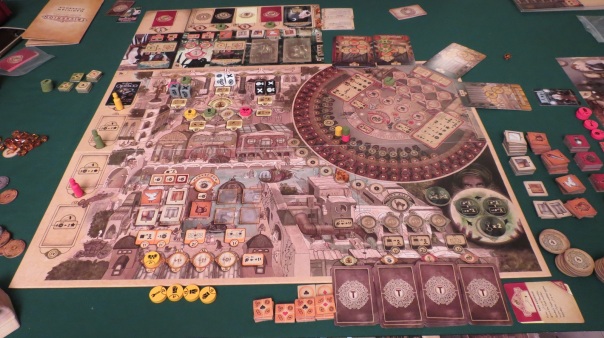 Welcome to the City of Magic.

Before I get into my reservations about Trickerion, I’m bursting with enough enthusiasm about what it does right that I can hardly contain myself. Because when it’s tugging rabbits from hats and sawing volunteers from the audience into thirds, it deserves a standing ovation.

For one thing, it absolutely nails the idea that the performance — when your magician gets up in front of the crowd to wriggle his magic hands and make everyone go ooh and aah — is the culmination of a whole shedload of work. As any performer knows, the Night Of is a wonderful thing, but it’s almost perfunctory when stacked up against the endless hours of preparations beforehand. Here, the performance itself is as simple as counting up some bonuses. You put on a great show on a Thursday night to a rowdy crowd of workers, raking in a bit less coin because it was a bargain audience, but you and your guest performers did a fine job, upped your fame, took home some silver, and maybe picked up a semi-magical stone or two. All in a night’s work.

Trickerion, however, is more interested in the day’s work that came before that night. Scratch that: the week’s work. The bulk of the game is about all the little events of logistics, inventory management, hiring, the gathering of blueprints and the arranging of a solid program. The performance itself might be the crowning moment that you’re building towards, but it could feel almost like a letdown if it wasn’t for the fact that you just earned a whole bunch of money and spread tell of your magical prowess. 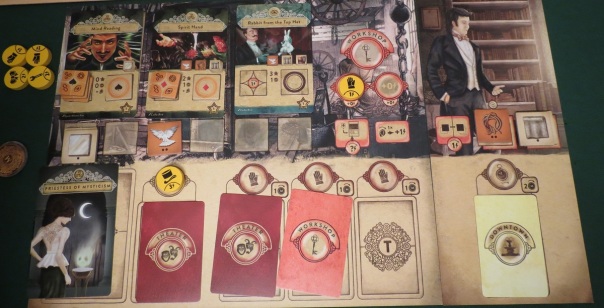 Inside the magician’s workshop.

And while the game is crammed with so many icons that it can be a little tough to follow right at first, everything gradually falls together to make more sense than it first appears. Broadly, a single round goes something like this:

First you’ll assign secret orders to each of your workers, dispatching them to the market to pick up mirrors and doves, or downtown to hire new assistants or beg for loans from the bank, or perhaps to Dark Alley to read some omens or learn sneaky ways to get ahead. Then everyone flips their cards over and begins dispatching their minions in classic worker-placement fashion.

This is already way more tricky (ha?) than it might seem, because each neighborhood around town can only accommodate so many magical visitors. Making matters even more complicated, getting to a particular area earlier means you’ll have extra actions to spend once you arrive. At market row, for instance, purchasing an in-stock item only requires a single action, but that’s not likely to be the only thing you’re interested in accomplishing. Further actions will let you order different items for future rounds, rush-order materials you absolutely must have right now and that you’re willing to pay a premium to lay hands on, or even haggle for a discount. Sending a lowly apprentice, then, won’t get you much. Much better to go yourself, since your magician token can take a whole bunch of actions. But every round your magician is occupied lurking around the market stalls is a round she isn’t on stage.

Even the seemingly-simple act of putting together a new trick requires a whole lot of juggling, and isn’t always possible within a single round. You need to head downtown to learn the particulars of the trick itself, then to the market to pick up the particular components the trick will need, then assemble the whole thing in your workshop — itself an action you’ll have to perform multiple times throughout the game, since a burning mummy isn’t going to set itself alight — and then to the stage to set up the trick in a particular venue, and again to perform it. Oh, and along the way you may as well stop by the Dark Alley because they’re offering to hire a pliable audience that will spread your fame far and wide, or hire a new engineer to help build your tricks — and increase the size of your player board too — or learn a trick from a different school so you can leverage them into an ever-better performance.

If it sounds like a lot, it is. Even if you manage to assemble a fantastic show, it’s entirely possible that another magician will come along and perform it first, relegating you to second-fiddle status when you appear as a guest rather than in the headliner role. 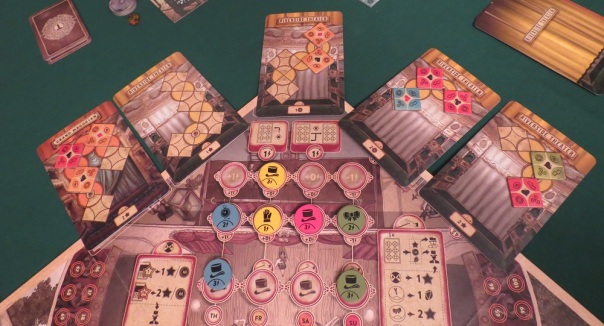 Each round reaches its crescendo when magicians put on performances to rake in the dough and fame.

The lesson is twofold. On the upside, putting together a working performance feels truly magnificent, the result of careful work on any number of fronts. Planning ahead, outwitting your rivals by assigning your assistants more cleverly, and nabbing all the right pieces before assembling them into a wondrous whole makes for an incredible feeling.

On the other hand, this can also make Trickerion limb-deadeningly slow, buttocks and brains going fuzzy while you wait for someone to decide which illusion they want or which worker to assign first. The game accounts for this by providing everyone with a handy menu of options, so you’re free to peruse all 48 tricks at your leisure. However, because every one of them is equally available from the get-go — how famous you are determines whether you can learn a trick, rather than, say, a random card offer — it often feels like a requirement that you plan out your entire approach in advance, settling on which combination of tricks and materials and hirelings will require the least number of actions to pull off. In my group’s experience, the first pair of rounds were the longest, with everyone’s noses buried in their menus, and heaven forbid anyone should hope to acquire the same trick as anyone else. This isn’t to say the game is entirely inflexible on this point, or that it relies on dreadful build orders, but there is an element of long-term planning that drags the game out and won’t work for everyone.

Fortunately, while the tricks are always the same, there are a couple things that prevent Trickerion from becoming overly deterministic. For one thing, the availability of illusions, bank offers, and new hires is determined at the start of each round by a roll of the dice, meaning you won’t always be able to rely on picking up that prison break trick you’d planned for, though of course you can spend extra actions to mitigate a roll that didn’t go your way.

Even better is the Dark Alley, an optional set of rules that wrinkles nearly every smooth surface in the game by offering special assignments. These are similar to the regular assignments in the sense that they’ll send your workers around town, but now they offer all sorts of additional bonuses, like letting you purchase items more cheaply, pick up a trick partially assembled, or even manipulate the way you put on a show. In my last game, a combination of a permanently enhanced trick and the temporary ability to perform it twice in a single show skyrocketed me into my rightful position as the most famed illusionist in the city. Very cool. 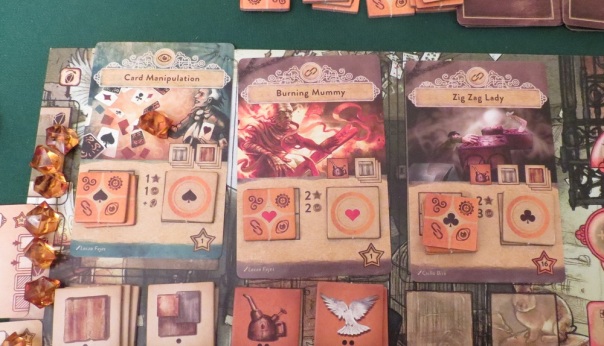 These are no mere cantrips.

When you get right down to it, Trickerion: Legends of Illusion is a fascinating game, as bold as an escape artist and as polished as a show manager’s brass buttons. And yet it’s also occasionally frustrating, especially when its steady momentum towards a weekend of much-anticipated performances screeches to a halt while someone mulls over which component to order, illusion to bring home, new employee to hire, or what a particular bonus or symbol or special assignment card means. At times it even feels bloated, options piling maddeningly atop possibilities atop choices. In those moments, I find myself pining after a game that runs ever so slightly more briskly.

All the same, this is good stuff, especially for those with the patience to weather its slower moments. Whatever else Richard Amann and Viktor Peter dream up, I’m in.

Posted on October 8, 2016, in Board Game and tagged APE Games, Board Games, Mindclash Games, The Fruits of Kickstarter, Trickerion: Legends of Illusion. Bookmark the permalink. 1 Comment.

← In Space, No One Can Hear You Roll
From Dud to Dude →