← It’s an Illusionerion, Michael
We All Go a Little Mad Sometimes →

From Dud to Dude

If we’ve learned any one thing about Scott Almes and Gamelyn Games’ Tiny Epic series now that we’ve reached the fourth entry — the previous ones being Kingdoms, Defenders, and Galaxies — it’s that they’ve got a lot of heart. Maybe even more heart than bite, sometimes, maybe.

It isn’t that they aren’t tiny, because sure, on a particular scale they’re downright microscopic. And it isn’t that they aren’t epic; when a word has lost all meaning, there’s no reason to keep championing it. Rather, it’s that they live up to their pitch. They’re portable, functional, and for being so compact and workmanlike they’re also decently good times when you don’t have a whole evening to burn.

The problem with that theory is that Tiny Epic Western is actually the sort of game I might play as a non-filler. 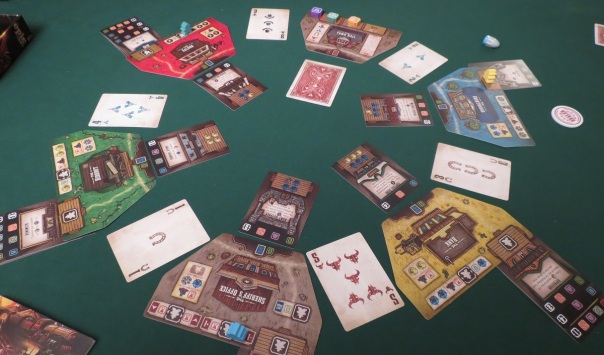 I’ll give you five pesos if you can guess the plot to Tiny Epic Western. No, reverse that. You should give me five pesos. Because this is about as plain an outfit as the Wild West has ever worn. Everyone is some sort of ringleader, whether outlaw, chief, lawman, rancher, banker — you get the idea — and it’s your goal to gallop out with your posses, put on a rootin’-tootin’ time shooting up the local establishments, and take command of this here pueblo. There’s also something about railroads and wanted posters, because it wouldn’t be a Western without those. Oh, and you’ll be playing some poker, because of course you’ll be playing some poker.

The thing is, original as unadorned spaghetti though it may be, Tiny Epic Western’s pared-down poker, which uses a three-card hand and a short deck of four suits and number cards from one to five, is what transforms the entire thing from dud to dude.

Let me explain. The town is laid out in a little wagon wheel arrangement, with little destinations and poker cards ringing the periphery and purchasable deeds for spokes, and much of the gameplay revolves around ordering your dudes to claim the benefits of those locations. Simple enough, especially when you elect to take an establishment’s easy money, opting to earn a meager sum of gold, law, or force right then and there.

However, there exists a second option, which is to press your luck a little bit by sticking around and hoping to double your winnings. Rather than just popping by the bank (which, puzzlingly, initially pays out law rather than coin), you can mill around the foyer, running the risk of a shootout, all in the hopes of raking in some extra dough.

The components are quite nice. And bullet dice!

While your posse twiddles their thumbs at their destination of choice, a rival might come along and demand satisfaction, resulting in a quick duel that’s nearly entirely settled by the roll of a die. Oh, each player can manipulate the outcome a bit, whether by spending some resources for rerolls or revealing their hidden poker card (more on that in a moment) for a one-off bump to their strength, but it’s largely a random affair. This is somewhat unfortunate, given all the effort that goes into picking out a destination and the fact that you usually only have two dudes running your errands. In fact, the best compliment I can pay these shootouts is that they’re functional and inject some small measure of tension to the proceedings. Other than that, they’re the low point in a game that mostly fires on the assumption that a well-planned victory is an earned victory.

Anyway, once everyone’s posses are out on the town, the real meat of the game decides to show up. This is when everything comes together, all the dudes at each establishment revealing their poker card to assemble a hand with the two cards flanking it. It’s an important moment, the culmination of everything else you’ve done so far: the cards that were laid out beside each location at the start of the round, the choice of card you picked soon after that, every posse you’ve ordered around, and every duel that’s resulted in a prematurely revealed card. At each location, the winner will take home a fat pot, huge quantities of resources suddenly crammed onto their player mat. As for the losers — well, they’re losers. They lost. There’s no pity prize for losing.

I seriously cannot overstate how clever this is, tying the outcome of the game’s biggest moment to every little thing that’s come before. Revealing your hidden card earlier in the round might win you a crucial shootout, but it will also tip off your opponents about where you’re strong and where you’re weak, letting them either dodge around you, foil your plans, or maybe even visit the sheriff’s office to change their own card’s suit or value in order to beat you at some critical establishment. In most games, “resolution phase” means the boring part. The bookkeeping. It’s when you flip up your exhausted tokens or reshuffle a deck or something. Here, it’s an actual climax to the slow-burning tension that makes up the rest of the gameplay.

Even better, the resolution phase’s climax has a second climax, which is pretty dang grand if my pa’s wedding night advice is to be believed. Once all the regular locations are wrapped up and resources have been awarded, everyone’s card is applied to one final hand at the town hall. And this is often the most important contest yet, because it determines both who gets to purchase a building first and which score tracker is advanced.

Both of these are crucial for any wannabe town boss. Buildings are your primary source of points once the end of the game rolls around, and provide tidy bonuses to visitors too. Even better, when someone else visits a building you own, you earn a bit of coin for their patronage. Having enticing establishments of your own can therefore be the difference between victory and defeat.

But that’s not all, because buildings also increase your dominance over the town’s three industries, the mines, railroads, and wagon teams that are represented by the town hall’s score trackers. The winner of that final hand gets to choose which of these trackers to increase, making it — and hopefully their properties — more valuable at the end of the game.

Man, there is some truly clever stuff going on here. The way every round is thick with those poker hands, from the setup when cards are laid out to the reveal of the final hidden card, is absolutely brilliant. Even the worker placement, while about as simple as that sort of thing gets, allows for regular difficult choices between small rewards right now or a potential greater reward later on. Even the game’s weaknesses — the frustrating randomness of the shootouts and the fact that it can run surprisingly long for something that bills itself as “tiny” — hardly even register in the grand scheme of things.

Tiny Epic Western is by far the cleverest, tightest, and best Tiny Epic game yet. To reuse one of my favorite words, it’s a rootin’-tootin’ good time. And a smart one too.

Posted on October 12, 2016, in Board Game and tagged Board Games, Gamelyn Games, The Fruits of Kickstarter, Tiny Epic Western. Bookmark the permalink. 3 Comments.

← It’s an Illusionerion, Michael
We All Go a Little Mad Sometimes →