← We All Need Control
The Space-Biff! Space-Cast! Episode #5: The New Millennium →

There’s something about throwing a hefty mug, beverage still sloshing around inside it, at a friend’s head. If you haven’t managed to scratch that one off the old bucket list, I recommend getting to it sooner rather than later. Live a little.

In the meantime, The Dragon & Flagon is all about tender moments like these. A bunch of adventurers, rowdy and randy after their latest successful dungeon dive, and all as parched as that heap of desiccated bones they kept tripping over, have decided to trash the tavern they’re supping at. Who can blame them? They just saved the village. Maybe. After knocking a couple back, they can’t quite remember.

That might be the story of The Dragon & Flagon, but the real treat lies in seeing it set up, a pristine tavern hall complete with tables, chairs, and rotund barrels and frosty mugs of butterbeer. It looks fantastic. Even better, since your goal is to pummel everyone else in a drunken rage (for honor! for glory!) until the moment the town watch kicks down the door to apprehend everybody for disorderly public conduct, you get to upend the place.

It’s a fantastic pitch, and I have yet to witness anybody hear it, see that board with its cute-as-buttons tables and little cardboard rugs, and not rub their hands in anticipation. This is going to be good.

Then, as surely as rounding a corner in a supposedly sure-thing dungeon and plowing straight into a Gelatinous Cube’s kindhearted fondle, everything slams to a halt for a bit.

Here’s the deal. The Dragon & Flagon is a game where you can pick up those mugs and throw them at your pals. You can roll those barrels until they crumple someone over, or push a table to make your buddy fall flat on his face. You can see its tone right there in the artwork. It’s hilarious. It’s lighthearted.

But it is not breezy.

Here’s an example of what I mean. Let’s say you’ve just been handed an opportunity, the kind you just can’t pass up. Your pal Montero is standing on the table, bragging about how far he can urinate, while Sir Goodheart and Nari are slugging each other in the jaw. All three of them are positioned atop the alcohol-soaked rug that the proprietor hasn’t replaced in years, probably because it was a gift from his ex. With a single flourish, you can pull on the rug and send all your friends flopping to the floor. Not only will it make them look stupid and set their heads spinning, you’ll also look like the most heroic fella in the room.

First of all, you need to have planned this move one or two turns ago. This is a programmed movement game, meaning that you place cards representing your character’s moves a turn or two before you’ll actually flip them face-up and do what they say. While you never have to lay anything out all that far in advance, every card you put down will still see your opponents making some sort of move before you get a chance to swing at them. For all you know, by the time you lean down to give the carpet a tug Montero might have swung away on a chandelier, while Nari has used her roguish powers to appear behind you, ready to plug her knife between your shoulder blades. Nothing is certain.

One of the great joys of life is tugging a rug out from under someone.

If you’ve planned your cards right, and if you’re standing in the right spot, and if you’re facing the right direction, and if your target hasn’t ambled off to drunkenly slobber elsewhere — that’s a lot of ifs, for those who haven’t been keeping tally — then you’ll laugh out loud at your success. You’ll bust a gut while you bust heads. In this case, everyone remaining on the carpet is knocked to the floor, is forced to fork over a couple of their reputation tokens, and becomes “dazed,” meaning that they’re so addled in the head that they have to plan their moves even further in advance than usual. Awesome.

But that’s if you landed your hit. It’s just as possible that you ended up whiffing it. In that case, you were the weirdo who was tugging on the fraying ends of the rug for no particular reason.

Now, it might sound like I’m saying all this as a negative, but that isn’t the case in the slightest. In a game about a tavern brawl, it’s entirely appropriate for its participants to swing and miss almost as often as their fists connect with their targets. You’re drunk off your rocker, after all. It’s just that the game’s setup makes it sound like a raucous time, a fast-moving comedy game that’s over in ten minutes. Instead, The Dragon & Flagon is something that functions as an actual game, one you might win because you planned better than your opponents, one where, as your options become more interesting, dynamic, or creative, more goes into making them happen. It even hands you nearly every card you’ll use over the course of the game right up front. That’s 17 cards plus a supercharged extra move if you manage to claw your way to the magic flagon in the center of the room and take a drink before everybody gangs up on you. For first-time players, it can be a bit much. It can even outstay its welcome as everyone sweats over which card to program each turn.

Honestly, I wouldn’t have it any other way. See, what The Dragon & Flagon loses in momentum and fluidity, it makes up in sheer smarts. This is a game where it’s possible to climb onto a table, boast of your sexual prowess, then swing from a chandelier with an intent to kick everybody on your way down to the floor — only to slam headfirst into Tuuli’s riposte and embarrass yourself. These player-driven moments of humor are nobody’s fault but your own. There’s no random deck or dice to blame, just your own inability to plan ahead. And when you’ve assembled a group that understands that the mistakes they’ll inevitably make are the game, people who can also enjoy the game’s unexpectedly deliberate pacing, the whole thing starts to come together. 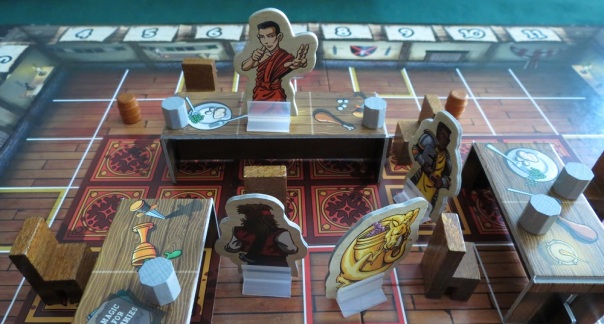 You’re about to get kicked in the face, buddy.

When it gets a tune going, this baby sings — though perhaps in a marching tempo. With enough players, whether on their own or divvied up into teams, the room becomes a mess of two or three little fights that orbit, then crash together in a heap of blows, then separate as somebody tries to roll a barrel under the table or pick up a chair to slam into an opponent’s head. Winners are ganged up on, losers go at it like they’ve got nothing to lose, and everybody’s having a good time, even when they’re complaining about how bad they are at this sort of game.

In fact, I’m nearly ready to declare The Dragon & Flagon one of the best programmed movement games I’ve ever played. It’s funny from start to finish, looks great on the table, and results in lots of laughs as heroes fall on their face, swing over everybody’s heads while missing every single kick, and stare at each other over perfectly-synchronized ripostes. It won’t be for everyone, but those who possess a solid group ready to take themselves a bit un-seriously and overlook some drawn-out gameplay will find a lot to enjoy here.

Posted on September 20, 2016, in Board Game and tagged Board Games, Papa Geoff and the Wee Engelsteins, Stronghold Games, The Dragon & Flagon. Bookmark the permalink. 4 Comments.

← We All Need Control
The Space-Biff! Space-Cast! Episode #5: The New Millennium →