The Blind Waging War on the Blind

Between Space Cadets: Dice Duel, The Dragon & Flagon, and this year’s The Expanse — which even made the book series’ stupid James Holden a little more appealing — you’d think I would have learned to trust Geoff Engelstein. And yet The Fog of War sat on my shelf for months before I finally got around to figuring out how to play the dang thing.

Part of this is the game’s fault. To put matters bluntly, its rulebook is about as coherent as roadkill outside Las Vegas in late July. Worse, in between learning a handful of legitimately complex games this year, I bounced off The Fog of War’s puzzling array of new concepts, out-of-place rulings, and ponderous layout on more than one occasion.

Okay, enough harping about the manual, because here’s the thing. Now that I’ve learned The Fog of War, I’m smitten. This one of the smartest, most devious, and absolutely gut-wrenching game systems I’ve ever had the pleasure to interact with.

Picture this. Risk. That’s right, Risk. Yes, I know how that sounds. Yes, you’re too cool for Risk. Too advanced. But hold your horses.

Risk. But there are no pieces on the board.

Oh, there are pieces. There are tokens for identifying which side controls which regions. Sometimes one side will cut off the other’s route to a supply region, and then there are out-of-supply markers for showing which countries have become stranded. Or one side will enter into a battle with the other — this is grand-level World War II game, so there are only two sides — but they won’t win or lose outright, instead plunging that country into a quagmire that could last months or even years. There’s a piece for that too.

But as for what we mean when we usually say “pieces,” the little tanks and planes and shooty-boats that turn the tide of a war, there are none. At least not on the map.

Since we’re talking about WW2, let’s really get into it. Leading up to the invasion of Normandy, the Allied command dreamed up a program called Operation Bodyguard, which was intended to help the landings blindside the Germans. They spun a story that the invasion was headed for Norway and Pas de Calais, which was supported by inflatable tanks, false radio chatter, the reports of double agents, and even political overtures toward Sweden.

The Fog of War could have been entitled Operation Bodyguard. Not that it should have been, since The Fog of War is both cooler and less likely to confuse people. But that’s precisely what the game is all about. Obfuscation. Bluffing. Launching an attack where your enemy doesn’t expect it. Genuine Operation Bodyguard stuff, like pretending you’re going to invade Africa, except your ground forces land in Yugoslavia instead. 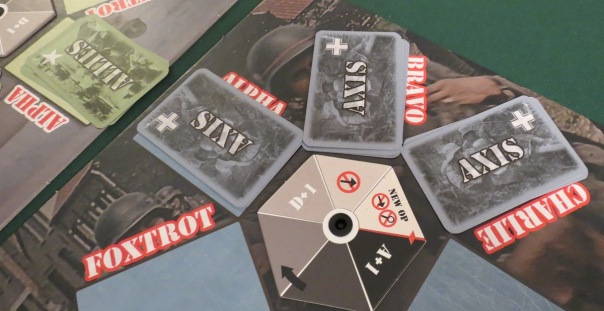 This might sound complicated. And, well, it can be. But the whole thing operates with an enviable smoothness, and it isn’t long before both sides are jostling around each other in a peculiar mating-dance that will ideally leave only one partner standing.

It all comes down to the Operations Wheel. But I can’t tell you about that quite yet.

Both players begin with two decks. The first is a simple stack of province cards, always off to the side, waiting for you to enact your nefarious plans. The other is an action deck, brimming with all your tanks, planes, shooty-boats, and a healthy dose of decoys. Over time, this deck can grow thinner or fatter as soldiery is lost, purchased, or committed to garrisons. Either way, you’ll only pull a few cards from this deck each turn, so you won’t always be able to choose whether you’re holding a hand of Panzers and Stukas or a whole lot of nothing.

But as Paul Newman could tell you, sometimes nothing can be a real cool hand.

Every turn, you have the option to prepare an op. This is where the Operations Wheel comes into play. By secretly laying down a province and at least one of your action cards on the Op Wheel, you’re ready to go. Or at least you will be soon. Every turn, your Op Wheel rotates. It will be a short while before your planned invasion has gestated sufficiently to launch, and even then you might want to hold off for a while. Launching an invasion too early means your opponent will get a bonus to their defense; too late and your operation will decay into a hypothetical what-could-have-been. But there’s a narrow window where your invasion timing will be just right. And that’s where the battle bonus will be in your favor.

Not that you’ll always want to wait for that moment, mind you. Sometimes you’ll need to attack right away, or time multiple attacks to coincide with one another. In the meantime, you’ll be adding cards to your ongoing ops, or maybe adding cards to the provinces where you suspect an enemy attack will be landing. As I said earlier, it’s a dance. Both sides will always be niggling at each other for position. Which is how I understand dancing functions.

Anyway. Let’s talk about why those decoys just might turn the tide of the war.

The key to a solid defense is a wall of marshmallows.

The initial application of a decoy might seem obvious. By piling zero-value cards into one of the provinces under your control, you’ve created the impression that the space has guns and cannons and everything else it needs to repel an assault.

But that’s just level-one deceptomancy. At level two, you’ll begin to realize that you can form entire dummy invasions with all the punch of a light breeze. With some luck and bluster, it’s possible to convince your enemy to over-commit to the defense of a region you have no intention of ever touching. It’s hard to fully impress the psychological impact of seeing a full array of operations on an opponent’s Op Wheel without living it firsthand, but it’s a palpable thing, both sides growing increasingly jittery as the war drags on.

Of course, no game about deception would be complete without the possibility of figuring out your enemy’s plans. Both sides have a stockpile of intel tokens, which they can spend to peek at something on the table, whether a province garrison, an ongoing operation, or even the Axis player’s leftover secret goals. This doesn’t reveal everything — whatever you’re peeking at, you only get to see half the cards at random — but every so often you’ll glimpse the destination of an op, a crucial weakness, or a pile of decoys. Shrewdly, since that pool of cards is reshuffled once your espionage is complete, even your enemy won’t be entirely certain whether you’ve figured out what he’s up to.

More than that, even espionage can tip your hand or be employed as another level of bluffery. If Germany is spending intel tokens to investigate the defenses of Turkey and Greece, it might be a good time to send some troops to bolster those neutral nations against attack. Unless it was Germany’s plan all along that you would send a bunch of tanks to the middle of nowhere, leaving Paris open to invasion.

There are a few other important details, but they’re just the spice to The Fog of War’s already-potent recipe. New sides gradually trickle into the war, the Allies begin off-balance but gradually earn their footing, and the Axis might contemplate an early invasion of the Soviet Union despite Grandpa Winter’s looming approach. Supplies can be blockaded, control of the seas allows or prohibits mobility, and even a country’s climate can matter.

Most importantly, more than nearly any game I’ve played, The Fog of War makes good on the whole “wheels within wheels within wheels” conceit. There’s something about planning three attacks to occur in sequence and wringing your hands beneath the table because your opponent could very easily snip your supply lines if only he noticed that you were defending Egypt with nothing but blow-up dolls and broom handles.

In short: Geoff Engelstein, you are a magnificent bastard.

Posted on December 15, 2017, in Board Game and tagged Board Games, Stronghold Games, The Fog of War. Bookmark the permalink. 1 Comment.