← Mud, Smoke, and Friendship
Sickle of the Hype →

Through the Long Night

Dead of Winter was one of the best games of 2014. For one thing, it managed to weave a zombie yarn that didn’t feel stale, but beyond that it was also about as good as narrative-driven games get, full of deception and hidden motives, the nagging threat of betrayal, and plenty of do-or-die moments that could make or break the most stalwart colony of survivors. It was good stuff.

The Long Night isn’t just any old expansion. It’s right there on the box: nothing else required, stand-alone, everything you need to play. In essence, it’s Dead of Winter plus more, with any significant duplicate matter vacuumed out so that those who own the original game will find a reason to return to relive what is largely the same game. Perfect for new players and old-timers alike — or is it? In a package so packed to the rafters with stuff, let’s take a look at what The Long Night is really all about.

Don’t sweat the little stuff. Until there’s too much of it. Then it’s just overwhelming.

One of the reasons I loved the original Dead of Winter was for its elegance. Which might sound like a goofy compliment considering how much it had going on. It was a colony survival game, a resource management sim, a social deduction nightmare where everyone had their own selfish motives masking the movements of a potential betrayer, an ongoing narrative tale, and a cooperative game of whack-a-mole. The elevator pitch was simple: what happens when a bunch of survivor groups with competing goals are forced to winter together in the middle of a zombie apocalypse? The actuality wasn’t too complicated, though I doubt it could have been considered as simple as its premise. But elegant? Absolutely. There wasn’t much fat on Dead of Winter’s hungry belly. Every piece had a purpose, with very little left over.

The best expansions are nearly always the ones that fill out their core experience without turning it into a waddling slob. And when it comes to The Long Night’s little stuff, it largely succeeds. This is a modular expansion, meaning it’s entirely possible to just play with the basic game. This will give you 90% the same experience, albeit with new survivors, new goals, and new stories to tell. There are a few new tools to use, like explosive barricades that kill every zombie at their location, and survivors can now suffer hidden hurts by growing desperate in addition to becoming physically injured and frostbitten. In a game that’s never shied away from the harsh realities of survival, these sorts of things feel natural, even appropriate. They do happen to add a bit to parse each turn, but the overhead isn’t overwhelming. 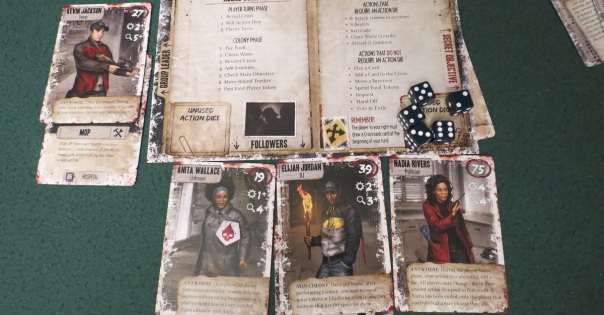 More of the good old stuff.

The smallest of The Long Night’s big additions is the ability to improve your colony, gradually committing junk and effort to build improvements. A simple fireplace, for instance, will let survivors remove frostbite as simply as swinging back home — a huge boon considering how often one of the new scenarios hands out frostbite tokens. The outhouse prevents waste from building up, a trench can stop a couple zombies from attacking your base every turn, and there are even tougher improvements like a greenhouse or linen bedding that make survival much easier.

In general, these are a great addition. While they might sound like one more thing to keep track of, in practice most colonies will only have the free time to build one or two per game, making each upgrade meaningful rather than burdensome.

I’m not sure I can pay the other two major additions the same compliment. Both the Bandit Hideout and the Raxxon building add quite a bit to the game, though the former tends to provide more immediate payoff for less effort. Here, bandits appear with each round’s crisis card, gradually gumming up the free spots where your survivors normally hole up in town. They won’t directly provoke you, but if left to their own devices they’ll gradually hoover up your valuable salvage, hauling it off to hide at their base. This can prove a blessing in disguise, as enterprising (or foolhardy) players can send their survivors to scrounge at the hideout itself, possibly picking out the choicest stuff that the bandits have hoarded. This can be a big risk, especially if you’re hoping to nab a whole handful of cards at once by making an attack, but the reward is often worth the risk.

Overall, this module is my favorite addition, giving the colonists something to worry about other than the numbingly dumb zeds who cheerfully walk into spiked barricades. It’s even possible for an exiled non-betrayer to become king of the bandits, though the rules on the matter feel a bit half-baked, letting the exiled player choose where to place the bandits but still having to risk their hide to collect their supposed tax from the hideout. Ah well. 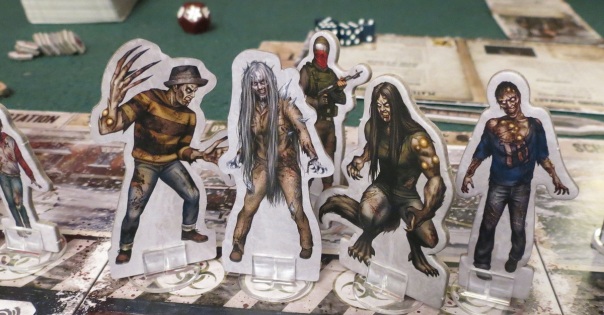 Bandits and Special Infected don’t get along.

The Raxxon module is far less coherent. Raxxon is, of course, the same nefarious corporation that was turning people into dog-men in Specter Ops, and the idea of breaking into their R&D center to unearth great rewards or great perils is a sound one. Super-tech? Super-zombies? Fantastic! Sign me up!

Unfortunately, the rewards and perils are more divorced than the pitch makes it sound. There’s nothing inherently different about searching Raxxon other than the fact that you’ll possibly stumble across something preposterously useful. There’s a mine-thrower, for instance, that requires no action dice to use and lobs explosive traps into any two locations you please, effectively transforming two spots into nigh-invulnerable super-fortresses for no cost. There’s also a drone that lets you make an ultra-powerful search from anywhere on the table — also for no cost — a portable barrier that makes a survivor’s location literally impregnable, and a test subject character who’s perfectly adept at everything, never eats, and is undetectable by zombies.

And honestly… it’s a bit much. Getting one or two of these items under your poncho can effectively neuter the threat of the undead entirely. Heaven forbid your group finds more and has to spend the last two or three rounds without anything significantly challenging their top link in the food chain.

The trade-off is theoretically the appearance of special zombies. And they are pesky, sticking around at a location and protecting their more-dead brethren until you specifically wipe them out, at which point you have to accept a random fate that nearly always stinks. The shopping cart grandpa zombie, for example — and yes, there’s a shopping cart grandpa zombie — might steal your stuff and run away rather than kindly digging himself a grave, while the Witch from Left 4 Dead might make your survivors feel so guilty about killing a little girl that they take their own life. These are just two of around a dozen monstrosities. The problem is that these guys show up at random every round unless you travel to Raxxon and spend some dice to seal the lab doors. Which, honestly, just gives you more of a reason to travel there, when the whole point of dangerous creatures like these is to avoid a place like a haunted evil corporate lab where human experiments have resulted in the end of the world. These dangerous super-zeds would have been better served by appearing during searches, thus making each trip to Raxxon more of a calculated risk.

Not even the whole thing, and already a table-bear.

Then again, the beauty of The Long Night’s modular system is that I never have to play with the Raxxon module if I don’t want to. Stripped out, I’m left with a beefed-up Dead of Winter, a bunch of new survivors and crossroads stories, base improvements, and bandits. This is every bit as good as vanilla Dead of Winter, porting both its narrative sensibilities, mistrust — and yes, its agonizing playtime once you have a big group at your table. For those who loved Dead of Winter, its best bits make it a must-have.

Posted on July 18, 2016, in Board Game and tagged Board Games, Dead of Winter: A Crossroads Game, Plaid Hat Games, The Long Night. Bookmark the permalink. 1 Comment.

← Mud, Smoke, and Friendship
Sickle of the Hype →