As those who know me can attest, I abhor repeating myself. Which is why I can’t even begin to fathom doing individual reviews of all the new editions, deluxe boxes, and standalone expansions appearing on shelves this time of year. Thus, rather than subject myself (and you) to a plodding second refrain of things I’ve already covered in the past, what follows is a breakdown of six excellent new versions of older games. Take a look.

Dracula gets furious when cornered.

The second edition of Fury of Dracula was already one of the best stealth games ever made. Yeah, it had a tendency to ramble on, and at times it felt a little fiddly, but watching four hunters flail desperately in the dark as Dracula whisked from location to location, seeding vampire covens and mad dogs and supernatural fog everywhere he went was one hell of a sight to behold. Thus, when Fantasy Flight announced a new edition, people were immediately suspicious of its proposed improvements. Rock-paper-scissors-style combat? A revamped (pun!) day/night cycle? That ‘orrible art of Mina “Skinny Arms” Harker punching Drac’s pointed teeth out? Puh-leeze.

Upon actually hitting the table, however, the changes in this new edition quickly prove definitive. Take the passage between day and night, for example. Where the previous edition could feel herky-jerky with its peculiar clumps of three days or nights at a time, the rounds now flow much more naturally from one to the other. Day is followed by night is followed by day, just as our circadian clocks agree it should be. The hunters now get two actions in a row (day and night), but are limited to traveling about Europe by the safety of sunlight. Later, they spend their evenings gathering equipment, searching their cities, or preparing for travel. Not only does this feel much more natural, but it impacts the violence that inevitably takes place between vampire and human. If the hunters discover and attack Dracula, combat will occur during nighttime and therefore favor the undead. But when Dracula attacks, the hunters have the advantage. This might seem unnatural at first, but it actually pitches any confrontation between the two as an ambush. You can set the trap, but your opponent must spring it.

Speaking of combat, the rock-paper-scissors system isn’t as simplistic as it might sound. Dracula is still trying to mesmerize and bite his opponents — if not just beat them to a pulp with his supernatural strength — while the hunters would do well to find better equipment than Mina Harker’s iron fists. Early on, the hunters are easily outmatched, but by equipping themselves they can tilt the odds more towards rock-paper-buffalo rifle. When that happens, Dracula might be more inclined to flee than fight, but this is where the time system comes back into play in the cleverest possible way. As the weeks roll by, Dracula’s plan to create a kingdom of the undead not only marches along, essentially placing a time limit on the hunter’s efforts, but he also grows more proud of his accomplishments. This means he refuses to flee from the first few rounds of a fight, giving the hunters extra times to put holes in his hide.

In the end, the third edition of Fury of Dracula is easily the best version yet, elevating this fantastic game of tension and wits into a far better, more streamlined, and sexier version of itself.

Trying to just get by in Greenland.

Both Greenland and its prequel Neanderthal are very different sorts of dice games. For one thing, they’re mean. They hate you. They want you to fail. That alone makes them a far cry from your regular bones-chucking fare, and that’s before you consider just how complex and capricious they are, plus the fact that the rules might undergo a major shakeup an hour into the game. Which is probably why Greenland has been one of Phil Eklund’s most divisive titles, which is quite a feat for a designer who is occasionally dismissed for some of his non-mainstream perspectives. Just the other day, I saw someone mention he’s a global warming denier, which of course has a irreversibly negative impact on how well he designs games. Warning: thoughtcrime in progress!

The thing is, Eklund’s elaborate take on deep subjects is precisely why I love his games. And for those scared off by the fact that his graphic design sometimes looks like a crazy person’s conspiracy wall, the second edition of Greenland is possibly the sanest point of entry to his unique vision. The graphics have been entirely redone to look less like they were torn out of last month’s National Geographic centerfold, the iconography has been given such an overhaul that they’re far more comprehensible, and the rules themselves have been slightly retouched for clarity’s sake. Perhaps the biggest addition are the placards for clarifying rules and managing each player’s tribe, a vast improvement over the microscopic tribe cards from the first edition. Only a few cards have been added, meaning this isn’t a necessary leap for those who already own the game, but all in all this is Greenland as it was meant to be played.

A ghost’s job has never been easier in Mysterium.

To my way of thinking, Mysterium remains one of the best group games out there. You can play with veteran boardgamers, with newcomers… hell, with your mom, and it’s a pleasant experience no matter what.

The singular downside with the original Polish edition is one that exists only in retrospect, a realization prompted by the new Libellud edition fixing the very problem I hadn’t even noticed until now. Put simply, the ghost’s job of sending dreamed clues to the spiritual mediums trying to solve her murder is tough enough without having to flip over all the ghost’s cards every few minutes, which is exactly what the original version required. Thus, when the new edition included a big folder for storing all the ghost’s clues, I just about had a spiritual experience of my own. Now the ghost simply flips open her binder, peruses the murder suspects, rooms, and implements, and easily slaps down clues. All without having to painstakingly pick up and re-conceal her cards.

More questionable are the new “clairvoyance” rules. These are tokens that the mediums can use to agree or dispute their fellows’ decisions. On the one hand, when your pal Geoff is under the impression — yet again — that every dream-clue and murder suspect are connected via color (and damn the actual content of the pictures), you can put down a token that basically says, “No, that makes no sense, you spiritual simpleton.” On the other hand, this amps up the confrontation in what is otherwise an unfailingly charming and peaceable game. How well you fare at using these clairvoyance tokens also impacts how many clues you’re permitted to see when determining the actual murderer, which is both more structured and a little more awkward than the original.

Ultimately, I could take or leave the clairvoyance option, but the presentation — and especially that binder — is nothing short of stunning. If getting your hands on the Polish edition had previously proved difficult, this is the best time to investigate Mysterium. 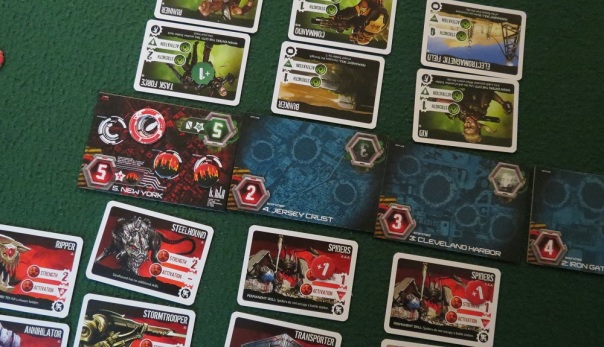 When I titled my original review of The Convoy “Neuroshima Rectangle,” it was only half in jest. The problem was that The Convoy simply wasn’t capitalizing on its proximity to the popular Neuroshima Hex, the post-apocalyptic tile-laying game with which it shared the same radioactive world and asymmetric factions. While I don’t want to take credit for the new edition’s superior title — well, actually, I do. You heard it here first. And truly, it’s a much better title. I look forward to receiving my royalty check.

Asymmetry was the beating heart of this particular beast. The death-machines of Moloch rolled towards the last human bolthole in New York, murdering everything between them and their destination. On the other side, the beleaguered Outpost maneuvered and finagled and tricked — only for the robots to suddenly sprout fallout-cannons from their well-oiled orifices. Better yet, The Convoy took a more varied route than simply pitching its two factions as brute force vs. subtlety. Here, both sides had moments of raw power, opportunities for trickery and surprise, and a whole lot of murderous intent. Great stuff.

The new edition isn’t far removed from the original, but it’s still an improvement. The cards are finally content to use handy text rather than sticking to their secret language of hieroglyphics and icons. The rules are clearer, and some of the game’s extra fluff has been stripped out in favor of a faster, leaner experience. Which is perfect, because this is the sort of game that works best when it provides a hard-hitting forty minutes that leaves both players breathless with frustration and a thirst for revenge.

The deluxe edition of Pax will prove invaluable to those who couldn’t remember the market costs.

Of all the new editions listed here, the new collector’s edition of the sublime Pax Porfiriana is possibly the least impressive — though don’t let that fool you into thinking I don’t recommend it. It’s just that there are precious few changes from the original version. The box is bigger, which isn’t much of a boon, and there’s a pixelated board for the market, though anyone who can remember the increasing sequence of card costs (0, 1, 2, 4, 8, 16) will find this entirely unnecessary. If you’re interested in Pax Porfiriana’s new sequel, Pax Pamir, then you can reverse the board and have a rather nice playing area for that game, but you can buy that separately for significantly less than picking up the collector’s edition.

Still, I’m glad this exists, if only for one major reason: the original game is long out of print and hard as hell to lay hands on. For anyone who missed out on one of Pax Porfiriana’s earlier print runs, this is as good a time as any to snag a copy before they return to costing 200 bucks on eBay. For those of us who already have one, however, this probably isn’t going to hold much appeal. 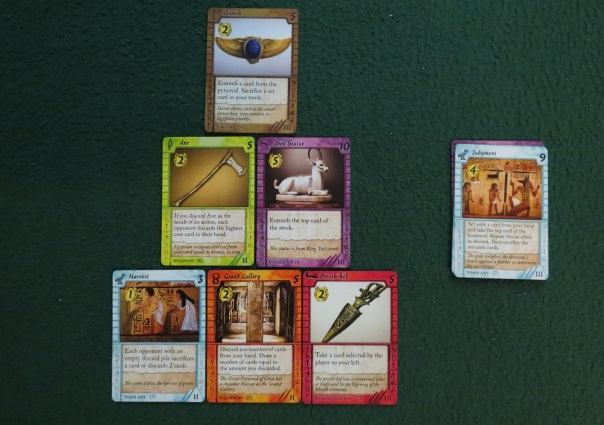 In Valley of the Kings, you CAN take it with you.

The original Valley of the Kings is one of the best “pure” deck-building games I’ve ever played. It’s just so danged smart. Playing as a pharaoh and having to choose between using your treasures as cash/abilities or entombing them for points once you’ve died was a stroke of brilliance. Consequently, it rewarded the planner and punished the procrastinator, as the years got on and you suddenly realized you were probably only a few rounds from death and you still hadn’t put any shabtis or urns or nostril-hooks or anything at all into your final resting place. And that meant the afterlife was going to blow. All the other dead pharaohs would mock your emaciated ka.

Afterlife might be an expansion, but it’s the rare sort that you can buy and play on its own, complete with its own starter cards and references and everything. All the cards on offer are unique from the ones in the base game, providing new opportunities as you build your wealth and provide for an abundant post-life experience. It’s more of the same, but this is as good as “same” gets. Best of all, you can combine Afterlife with Valley of the Kings to create an even more diverse set of treasures to choose from, making this one of the most affordable deck-builders out there, making this one of the easiest recommendations on this list.

Aaand… that’s it! Six new editions of very good games, many of which represent well-worn favorites from the past few years. Now go and partake of this sweet, sweet mustard.