The entire span of human civilization is a lot to compress into three or four hours, let alone a trim 90 minutes. And yet that’s precisely what The Golden Ages aims to accomplish, cheerfully charting mankind’s ascent from mudbrick ziggurats to skyscrapers to star ladders. Better yet, in an age when a game’s briskness is often valued over its cleverness, all too often leaving the possibility of deep gameplay experiences stranded along the side of the road in its haste to arrive at its destination, The Golden Ages manages to be something even more valuable than fast: compelling. 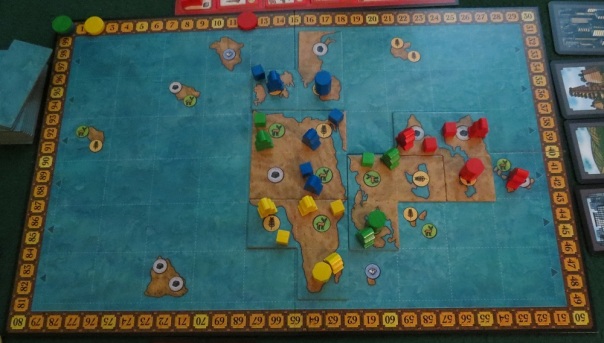 The humble beginnings of something grand.

Honestly, there’s a lot I could write about this one, but that would probably do the game a disservice. Part of this is because the rules are so straightforward that even a new player could probably read the rules and start playing within ten minutes. There are only a handful of actions, the gradual expansion of the game world is logical and measured, warfare is as simple as paying the cost and wiping out enemy cities, and the iconography is generally crisp. What I mean is that the actual mechanical act of playing just flows. To belabor the point is to miss the point.

On the other hand, there are two things that The Golden Ages does particularly well that I haven’t seen anywhere else. So let’s talk about those.

Unlike most civilization games, which straddle you with a nation and expect you to stick with it through thousands of years of upheaval, social change, and new advances in medicine, justice, technology, personal freedoms — pretty much everything — The Golden Ages instead recognizes that nations are sort of like wide neckties or John Travolta. As in, they come and go. Here, you aren’t so much running a single civilization as you are running a tradition. In much the same way that Western civilization can trace its rough heritage, philosophy, and values through Ancient Greece, Rome, the Christian-dominated Middle Ages, European colonialism, and beyond, here you’ll blend one kingdom into another, discarding modes of thought (in the form of bonuses) when they no longer benefit your people.

For example, one recent game started me out as the Babylonian Empire. This meant I had early access to agriculture, guiding me towards a focus on building cities around grain rather than wild game or metal. Later, I embraced the wealth of the Byzantine Empire, giving me the freedom to focus on developing technologies and expanding my infrastructure. When I became the Austro-Hungarian Empire, a focus on construction let me blossom outwards with huge cities. Eventually my people decided that three discarded empires was a spree and became India, nabbing a powerful endgame technology for nothing. The result was a single cohesive tale that moved my people through multiple eras, each of them distinct in what I was trying to accomplish.

Not that this is always the case. While I was overseeing the rise and fall of three different imperial dynasties, my buddy began as the Chinese… and then stayed Chinese for nearly the entire game. This is because some nations are more prone to last than others, forgoing powerful onetime bonuses in order to retain their former ability. In this case, China’s ability is that they can wage war at a discount, letting my buddy keep everyone in line for the first three quarters of the game. Then he became the European Union and everyone invaded him. 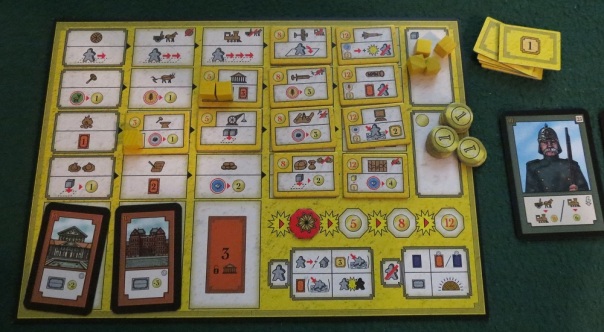 Prussia unlocks the trains tech for free. Is anyone surprised?

This system of swapping between civilizations might sound similar to the mechanism at the heart of Small World, which forced players to regularly put their kingdoms into “decline” and select new ones, but in practice they’re hardly similar. Here, the kingdoms are organized according to era, measuring out their abilities to match the needs of the current age. The result is slick, opening each era with the momentous decision between a fresh start or the continuing benefits of an older kingdom. Classy stuff.

Watching your civilization transition between different governments is nice and all, but entering a golden age is divine. Upon reaching a certain point in an era, you’re given the choice of flipping over your capital marker to let everyone else know that you’re going golden. This has some pretty dramatic ramifications.

The least impressive is that it’s a fancy-pants way of passing your turn. From here on out, you’re done. No more exploration, no more city-building, no more warfare or wonders or technological advances. In fact, doing this prematurely might even be devastating. A golden age might be prosperous, but they’re also static, and other players might take this as an opportunity to move into your territory or pursue other agendas while you sit around basking in your gloriously ascendant culture. Public baths and nude sculptures are probably a big part of this, but everyone else is still out there working for it.

On the other hand, the thing about golden ages is that they’re prosperous. With every passing round, you’ll steadily grow richer. Those who haven’t entered a golden age of their own are suddenly on the clock, every single action they take prolonging the period of your opulence. Better yet, the first player to enter a golden age gets to choose how everyone will be judged for that era, almost like a cultural hegemon setting the fashion of the day. This means it’s possible to wage war, enter a golden age, and choose to give points to players who have gone to war. Or you might expand your infrastructure and choose to reward the most urbanized civilization. It’s a smart way to emphasize the tension between entering a golden age as soon as possible and doing so when you’re good and ready.

I’ve had a huge amount of fun with The Golden Ages. Its two central innovations imbue every action with depth, casting them as both forward momentum and potential wasted time. This is the sort of design where everything has been ground to a fine edge, every action and component in its proper place. I’m sure it will prove too pared down for some, especially since every match witnesses the appearance of the same wonders, while the selection of civilizations, buildings, and history’s judgement cards could have been wider. But for a game with such impressive scope — and such a quick playtime — I’m definitely impressed with how much I’ve enjoyed this one.

Posted on December 15, 2015, in Board Game and tagged Board Games, Stronghold Games, The Golden Ages. Bookmark the permalink. 1 Comment.