Ah. Hello. You were probably expecting Dan, weren’t you? I can tell by the facial tics projected through your webcam that you’re a little surprised by this turn of events — after all, hasn’t Best Week 2014 come to an end?

No. It has not. Because we’re in charge now. And this only ends when we say it ends.

Don’t worry, Dan will be fine. Brain damage on par with a night of heavy drinking, or maybe drowning for a few minutes. So let’s just call this a guest submission. Because we, the undersigned, are not content with Dan’s tyrannical “Top Thirty” list, or whatever he’s calling his puppet regime these days. We merely aim to correct his errors with the actual top games we played this year.

Steve: Just some of the many ways Dan is wrong.

(Please note that we’re writing this in the third-person. That way Dan can’t figure out which of us hacked his WordPress account. And he will never know. There’s a sort of thrill in that level of anonymity, don’t you think?)

While it’s true that Steve’s twin games of the year made the cut — Sheriff of Nottingham and Dead of Winter, if you must know — he feels there were two glaring omissions from the list.

The first was 1775: Rebellion, which was quite possibly the best team game of the year, provided you could convince someone to play those faithless Tories. And Dan should have loved it because he claims to love history. So we’re declaring his college degree in history a sham, because anyone who loves history would also love this game, which is all about the Great and Righteous American War of Independence.

Next up was Coup, a really great filler game that takes a literal ten minutes to play and lets everyone lie about being a Duke for the first few rounds, then lie about being an Assassin and a Countess later on. It’s the sort of thing that’s perfect to play with people who aren’t used to games, and they’ll love it, because everybody loves lying.

Adam: Just some of the many ways Dan is wrong.

Adam’s fixes are relatively straightforward. Which is why they should have been included in the first place.

While he thinks every entry in the COIN Series is pretty good, he would like to replace Dan’s selection of Fire in the Lake with the far superior A Distant Plain. And not only because he kicked everyone’s ass as the Taliban, but also because it’s the best of the series. For other reasons that we don’t have time to mention here.

And next, Imperial Settlers isn’t so great — especially not when compared to its trio of predecessors, 51st State, The New Era, and Winter. For one thing, the setting is far more interesting. Who cares about Japan and Rome when you could be post-apocalyptic mutants versus a reorganized Texan superstate? And while the iconography and economy are far more difficult in 51st State than in Imperial Settlers, well, that’s only because the originals require a more advanced brain than the for-dummies family version.

Jessica: Just some of the many ways Dan is wrong.

As Dan’s confessed “brainiest collaborator,” Jessica would like to submit two games for your consideration.

The first is Sellswords, which was a very good two-player battle of wits for brainy collaborators, and secondly the Space Cadets: Dice Duel: Die Fighter expansion, which added fighters to the capital-ship duel of the original game.

And why wasn’t there a single real-time game on the list this year? It’s ridiculous, we say. There’s a very good chance that Dan has been taking kickbacks from the publishers of every other genre, because they clearly feel threatened by real-time gaming. Don’t trust anything he says. The more sincere his tears, the more guilty he is.

Somerset: Just some of the many ways Dan is wrong.

Hi honey! Somerset here. I’m not working “with” these guys, but they wanted to know if I had any thoughts on your list. And I just have one question —

Why did you betray indie cardboard this year? Normally you love to highlight all these weird little games that nobody else is talking about. Underdogs, you know. During Best Week 2013, The Quiet Year was one of your main picks, even making the top five! And you once serenaded me (by moonlight, you big softy) about how you thought an independent mind, unshackled from the confines of a big publisher, was the only way a man could truly be a Man, and could create something unique and beautiful. Something people might not even play, but something that they would remember.

So where was Ars Victor, the Kickstarter success that made us laugh in delight at the crazy rictus grins of its bazooka-soldiers? Or Shadows over the Empire, which I always beat you at, if only because you’ve never really grasped a woman’s needs, so of course you weren’t going to appease Queen Genevieve’s? Or how about …and then we held hands…, which possibly saved our relationship from another night watching Star Trek reruns?

Though that last one I suppose I understand how you’re so obsessive about capitalization. But where were those others? Where were our memories?

Anyway, I’m turning the computer back over to [redacted]. Love you honey! I’ll let you out of the closet once—

Elliott: Just some of the many ways Dan is wrong.

Elliott says we should let Dan go, or at least take the wet towel out from beneath the door, but we’re not done yet! And no he does not need more air! Even Elliott might as well take this brief opportunity to point out that Dan used his “Year of Hidden Information” idea throughout Best Week, but didn’t acknowledge two very important games:

Star Realms. Because it was way better than Valley of the Kings. Because Star Realms is in space, Dan, not about collecting crappy pottery.

And Legendary Encounters: An Alien Deck Building Game. Because even though Dan had to sort through like 700 cards, wasn’t it a lot of fun once he figured it out? The rattling of sentry guns, being grappled by a facehugger, the strong narrative elements… It reeks of conspiracy that neither of these deck-building games met Dan’s extremely persnickety criteria. 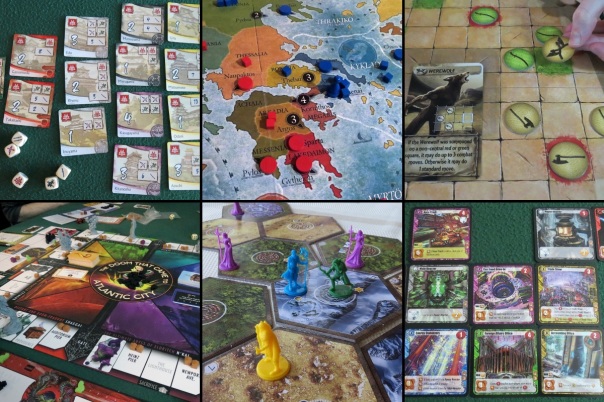 Geoff: Just some?! Dan is wrong about EVERYTHING.

Geoff here. I’ve been invited to—

Ah, who hasn’t figured it out by now? It was me all along. And I’d like to say that everyone else has gone easy on Dan. “Oh, you did fine, poor baby, but here’s one or two things you might have included. Sorry for hitting you on the head and putting you in that closet.”

No apologies. No half-measures. Dan was wrong about everything. EVERYTHING.

Because where was Age of War, the best filler game of the year? I’ll bet he didn’t include it because he can’t pronounce the Japanese names. Even though I, Geoff, lived in Japan for over two years and can pronounce every one of them perfectly! But does Dan listen? Never. “In yo mama,” he calls Inuyama. Not funny, man. Not even a little.

And what about the best two-player games of the year, Polis: Fight for the Hegemony and Tash-Kalar: Arena of Legends? You might have noticed how Dan only played those with me when he knew the rules and I didn’t, and conveniently forgot the “Oh I Win In A Secret Way” rule until the turn he used it on me.

Then there was The Doom that Came to Atlantic City, which I will request every game night for the rest of time until he agrees to play it again, because it’s an amazing group game. It’s anti-Monopoly! I mean, how clever is that?

Not to mention he didn’t like Hyperborea, and assumed our group was in consensus even though we weren’t! So no, not everyone at Space-Biff! thinks this game is “hyper-boring.” It’s adorable.

And lastly, my game of the year didn’t get a single mention: Among the Stars: The Ambassadors, the expansion that makes Among the Stars into the best game ever made ever. And I mean that. It’s the Platonic ideal of board gaming made cardboard.

Whew. I had to get that off my chest. Now Best Week 2014 can be over. Thanks for reading, whoever you people are.

Posted on January 3, 2015, in Board Game, Lists and tagged Best Week!, Board Games, Space-Biff!. Bookmark the permalink. 4 Comments.