← The Xia Drift
The Ancients Had No Turnips →

A Salvo of Space Expansions

I stand by my assertion that Among the Stars is basically a filler game, building a handful of space stations in about 40 minutes from start to finish and not asking too much of its players. However, its first expansion, The Ambassadors, changes all that — and not only because the setup just tripled in length. With The Ambassadors, Among the Stars comes into its own as a full-fledged investment of time and attention, every bit as fun as its predecessor but many times more rewarding when you pull off the win.

For one thing, even the most basic choices are now far trickier thanks to a host of new cards that combo in somewhat less obvious ways than the cards in the base game. For example, you might be tempted to host a Trade Show on your station, which places three credits on the card. If you still have credits on the card at the end of the game, you get extra points, but if another player hosts the Trade Show, you pick up the credits. Hence: do you play it early and probably get some cash, or play it late for points? Or just dump it to keep someone else from hosting the Trade Show?

Other cards encourage peculiar new station designs, like the Fast Food Drive-In that gives you points for locations that jut off the edges of your station, a Race Track that benefits from being placed within a chunky 4×4 grid, and the High Security Area that would very much prefer to not be near diplomatic, recreation, or business locations — which is almost every type of location there is, so good luck with that. Winning players will be the ones who can satisfy those peculiar little needs.

Some of the new locations even come with negative traits, like how the Minefield gains points when placed next to other Minefields, but loses points next to anything else, or the Experimental Weapon — lots of points, but if you dare discard it, you’ll be losing some cash.

The combos are less obvious, the stations more wild, and we haven’t even talked about the best part yet. 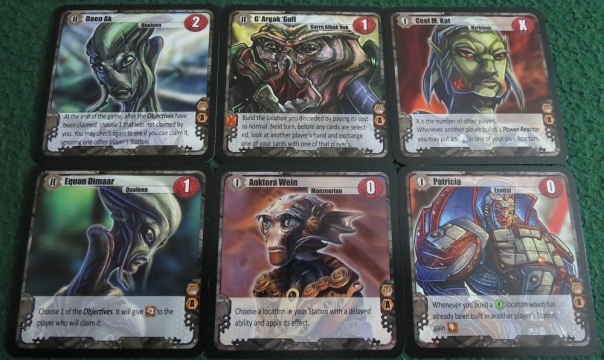 A few of the titular ambassadors.

The highlight of The Ambassadors is — surprise! — the ambassadors themselves. These guys provide new sources of, well, everything, mostly points but sometimes other benefits like cold hard credits. Struggling with the synergy of your locations? Maybe an ambassador can help! Need to catch up to the rest of the group? Place a call to the right ambassador! Going to come in second place on an objective card? There’s an ambassador for that!

What makes these such a great addition is that they add a whole lot of consideration but very little complexity. If you know how to build a new power reactor, then you already know how to build a bureau, which in turn attracts an ambassador. Simple, though it’s entirely possible that the length of the game just doubled because instead of building relatively easy combos, Among the Stars has become a game about wringing as many points out of your myriad options as you can.

Between the ambassadors and the fascinating new locations, I concede the point: Among the Stars is no longer a filler game. It just grew up into something much more formidable.

← The Xia Drift
The Ancients Had No Turnips →