The Ancients Had No Turnips

“It looks like City of Iron,” one of my friends said upon first judging The Ancient World by its cover.

Not that there would be anything wrong with that, but The Ancient World, the latest Kickstarter success from Ryan Laukat, has very little in common with his previous game City of Iron. Let me persuade you.

Welcome to the Ancient World.

For those who don’t know what I’m talking about, a while back Ryan Laukat designed a hybrid deck-building and tableau-assembling game by the name of City of Iron. It was a nifty one, gorgeous and lots of fun to play, and it made regular appearances at our table. And granted, there are a couple comparisons to be made between The Ancient World and that previous game. For one thing, they’re both designed and illustrated by Ryan Laukat. Check. And they both let you buy cards of both the civic and military varieties. Check.

Other than that, The Ancient World couldn’t be more different from Laukat’s previous hit. Perhaps the parallel seems legitimate because Laukat’s games have always had a distinctive feel to them, as though a few years ago he emerged from a glowing portal to some alternate universe where things could be done a little differently without going full bizarro. Just as Eight-Minute Empire and its sequel felt like an alternate universe version of an area control game, and Empires of the Void was that universe’s take on a spacefaring 4X game, and City of Iron was a Laukat-esque deck-building game, so too is The Ancient World a Ryan Laukat take on the worker placement genre.

Before we talk about what makes The Ancient World so novel, I ought to mention the aspect that has struck a couple folks as the most outdated. See, while you’re sending out workers and building an empire and killing these imposing titans — y’know, cool stuff — the end goal is to collect the colored banners that adorn said buildings and titans, with larger sets of banners netting more points at the end of the game.

I’ve seen a handful of people mention that this seems uncool somehow. And sure, it isn’t exactly innovative. Set collection has been around since the inhabitants of Göbekli Tepe decided it might be fun to see who could assemble the largest pile of brown rocks. But set collection has been a gaming staple for eleven thousand years for a reason, and here it acts as an easy telegraph of the value of every card in the game: empire cards earn one banner each and cost gold coins and the occasional scroll of knowledge, while titans earn between one and three banners but require soldiers to kill them. Easy to parse, easy to play.

Before you can assemble a tidy row of flapping banners, you’ll have to engage with the game’s more innovative elements. There are two in particular that leap to mind, and they’re what make The Ancient World shine.

First up is the worker placement itself. If you want gold or knowledge, or to draft a card, or give birth to new workers, or explore unknown lands, or expand your city-state, or repair the buildings trampled by titans — the usual day-to-day necessities of life in the ninth millennium BCE — having a spare worker to send is just the first half of the equation. The second half is that you must also ensure your worker is more skilled than the workers already placed there. If someone has already sent a level-3 worker up the hill to gain knowledge, and you don’t have anyone at level-4 or higher, then you’re right out of luck.

The most immediate application is that you can block spots early on by sending out your most skilled laborer, though this is a tradeoff — now your best worker is already out on the board, and certain other spaces, specifically the ones that let you buy cards, might cost extra to use if you can’t match the skill level of a worker already there. So your spurned opponents can potentially tag you back.

Every single placement matters, whether by blocking spots for unskilled laborers or making it tougher to afford cards. It’s a simple system that reminds me ever so slightly of Argent: The Consortium, where your workers require just a bit more consideration than other example of this genre usually require. 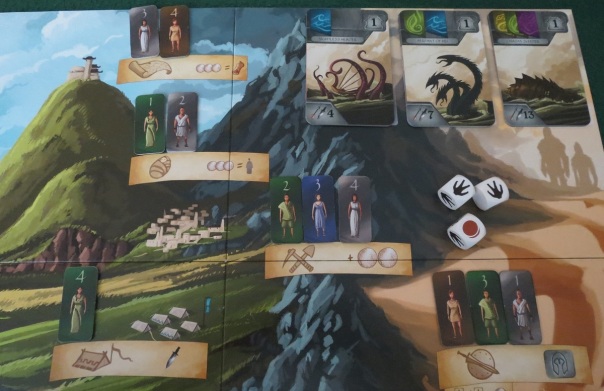 Work in the ancient world was surprisingly fun.

The second innovation is found in the way your military levels up over time. While the lower-risk option is to just buy empire cards, eventually you’ll run out of room, and the titans are where the most banners are found anyway, so now and then you’ll want to hire some tribal mercenaries to go out and beat them up for you. The problem is that your mercenaries are cocky sorts, and each victory makes them more expensive later on. At first they’ll only demand one gold piece; later on it’s two, then four. Their services become cost prohibitive before too long.

However! Instead of hiring the same dudes, you can recruit new bands of fighters. When you do, you have the option to “retire” an older unit, flipping it face-down and sliding it partway beneath your new army in such a way that it shows a little upgrade for your new guys — basically, your troops are leveling up based on the experience of previous warriors. Eventually, you’ll have powerful companies of fighters who deal immense damage and can plunder gold from fallen enemies. Best of all, because they’re new troops, their cost resets, letting you take advantage of their elite status without breaking the bank!

Knowing when to pay your troops for their extended services and when to retire them for fresher faces is every bit as central to a successful strategy as blocking spots on the board with skilled workers. Between these two systems, The Ancient World is a game of tightrope choices. Pay your troops to fight that titan before anyone else can snatch it away, or upgrade your army so you can afford to build something in your empire? Block that spot early on to disrupt your opponents’ plans, or hold onto your best workers to make sure you get what you want sometime later?

Other than the starvation, it seems pretty much okay here.

There’s some other stuff going on, like how you can expand your empire size to accommodate more structures, buy more workers and struggle to feed them, explore to reserve cards before they appear on the board, or use knowledge to unlock better buildings. After all, why settle for a low-income Forest Mine when you can spend some knowledge to get an extra worker from a Highland Town? It’s an absolute pleasure to watch your tiny empire grow from a couple farms to a whole row of structures, districts, and titan corpses, especially since it flows from beat to beat in a respectable 90 minutes once you know the rules, and its decision space is as clear as Laukat’s artwork without ever becoming too obvious.

All in all, The Ancient World has quickly become my favorite of Ryan Laukat’s designs other than Eight-Minute Empire: Legends. It’s definitely something to look out for.

Posted on December 8, 2014, in Board Game and tagged Board Games, Red Raven Games, Ryan Laukat, The Ancient World, The Fruits of Kickstarter. Bookmark the permalink. 10 Comments.