← At Long Last, Elephants!
A Salvo of Space Expansions →

There are two ways of looking at Xia: Legends of a Drift System, and the perspective you adopt is very likely to determine how you feel about its spacefaring antics.

Things aren’t going well for the captain of the Krembler. You’re stuck in space, drifting along at impulse speed, turns away from your destination. Even so, you hope nobody comes along to save you — just one more way for some other git to pick up a fame point.

It’s the fault of the dice that you’ve ended up like this. You even installed a Raptor-K Engine at great expense, spending all the cash you made from that research job — now there was a good roll, enough to complete the quest though you had to go and scan a few sectors before you figured out where Pelmont was so you could turn it in and get paid — and even though your new engine lets you roll a d12 to move, you couldn’t get anything higher than a 5 to save your life. Or your ship. Now you’re drifting while that other guy, the captain of the infuriatingly-named Bitter Karma, rolls a 20 when he’s trying to salvage scrap. Oh, look who’s famous! “If I could roll like that, I’d be in the lead instead,” you grumble.

It’s always luck. First it was the time you got shot up and had to jettison half your cargo when you tried to face off against the Enforcer who was sent to collect the bounty on your head for breaking the law — which you only earned because you failed a roll when you tried to sneak onto the surface of Neo Damascus. It’s not like you were doing anything illegal; it’s just that the entrance was so dang far away! Next it was the blind jump you took trying to escape that Scoundrel — straight into the sun, your Puddle Jumper destroyed, time to start anew.

So here you are, two turns out from Azure. Two turns from a refueling. And you can’t help but say it again: “Just luck. Just stupid luck.”

Things aren’t going well for the captain of the Krembler. As has proved the lot of many a space captain before you, you’re stuck drifting on impulse. Fuel gone, batteries spent, nothing to charge the engines.

It’s your own fault you ended up like this. You bought one of those fancy Raptor-K Engines, but maybe you should have saved up for a bigger ship or those better blasters — at least then you wouldn’t have ventured so far from civilized space. Maybe you could have gone legit and shuttled some plasma between Neo Damascus and Lunari. Instead, you pulled that research job, went exploring to figure out the location of the drop-site, and raked in a tidy pile of cash. Then you had to go and blow it on an impulse purchase. Shouldn’t have been too surprised when it turned out that a Raptor-K Engine bought from Smuggler’s Den turned out to be a lemon.

You’ve heard tales of the other pilots. The captain of the Bitter Karma had a recent good turn at a salvage op, and word’s spreading around about it. There’s plenty of time for thinking when you’re out of gas, and your thoughts turn to your own exploits: sure, you broke the law and had to jettison your cargo that one time, and you once jumped your ship right into the sun (only bailed out at the last second!); but you also remember that time you took a chance on that broken stargate and jumped right in front of all your rival captains, discovering the secrets of Vortex 86 and finding a wad of cash in the TK-421 asteroid cluster before anyone else could catch up. Good times.

Here you are, two turns out from Azure. Two turns out from refueling. And you can’t help but say it again: “Any of you boot-lickers comes out and tries to refuel my energy, I can guarantee I’ll put the juice to good use by firing two missiles up your ass.” 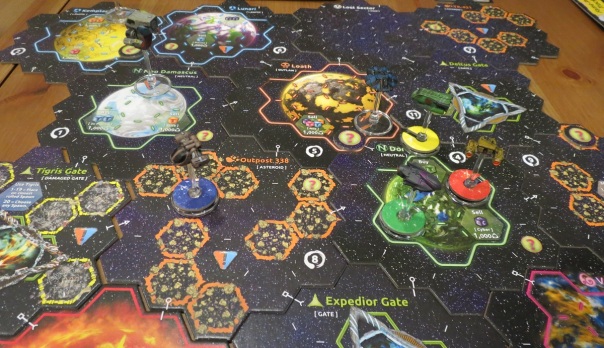 Most of Xia has been revealed.

Almost everything in Xia: Legends of a Drift System succeeds or fails on the luck of the dice. And whether you like the game depends entirely on how that sounds to you. It’s a sandbox system where your sole long-term goal is to earn a certain amount of fame points, and at times it feels like anything and everything can happen. In part because the dice make nearly every prospect incredibly risky.

You can go exploring, maybe find fame or cash. Or find nothing, just a sensor rainbow with no treasure at the end. Maybe scan a sector or opt jump into it blindly to save time or energy, though that second option might send you straight into a debris field. Maybe risk a stargate that could send you to any corner of Xia, whether right where you needed to go or the single farthest point from it.

You can undertake missions, though there’s little guarantee you’ll necessarily find the place the client wants you to go. Sometimes you’ll undertake legit transport, research, or bounty hunter missions; other times you’ll be a smuggler, thief, or assassin. In the course of those duties, you might try to sneak onto a planet’s surface to save on time and get caught red-handed by the authorities, or go to a pirate moon and get jumped by said pirates, or have your ship banged up when you take a shortcut through some asteroids, or run out of fuel because you avoided every possible danger. In any case, the mission itself will at some point rely on you rolling a chunky d20 to see how it all turned out — a wad of cash or a bounty on your head?

You can get into fights, though of course combat is a risky proposition. Or purchase a better ship, though you need to pony up the cash first. It’s possible to rescue stranded players for fame, though this brings the side-effect that most players will threaten to kill you if you try and save them. Even normal tasks that see you rolling a d20 can see you earning fame, as any natural 20 will get you a fame point. For what? For being lucky, that’s what.

In fact, there’s so much randomness that the game’s most overpowered parts are those that let you earn fame by buying and selling goods between planets, an action that requires no dice-rolling at all, at least not if you don’t try to sneak into the trade ports illegally.

Clustering around the broken Tigris Gate, for some reason.

Xia: Legends of a Sandbox System

Taken together, all these possibilities can be absolutely enthralling, a fantastically-told tale about a space captain as he works his way from beet-farmer to feared ace. Or it can be infuriating, the tale of how you rolled some dice and were told what happened by whichever numbered face peeked up at you from the surface of your table. Neither perspective is wrong, though one of them is definitely wrong for this game. Within my own group we saw both opinions come to the forefront. One of us couldn’t stand that there wasn’t a surefire route to victory, no real plans to make or strategies to develop; another insisted on reading the backstory and victory story printed on the back of every ship board, the very existence of which should tell you what Xia aims to accomplish. Between the two, it’s hardly surprising that the first was bored while the second found it one of the more rewarding gaming experiences of the year.

In short, Xia wants to tell you a story. A highly interactive story where you can run off to the most interesting corner of its “Drift System,” hooting and hollering about your successes and failures. A story where you can customize your ship, gaining a more dynamic vessel as the game goes on and you add abilities and modules. Where you can (and will) have incredible rolls of luck and devastating setbacks. Where the rules will tell you that players should lose turns when their ship is destroyed, leaving them sitting around like a doofus while their friends continue the game.

My opinion? I liked it. Quite a bit. It’s convincingly gorgeous, with all those unique ship models and boards and abilities, and a surprisingly dynamic, always dangerous star-sector to explore. I like the independent ships that go about their business without necessarily paying much attention to you, and I wish there had been more of those. There’s a bit of the usual Kickstarter lack of playtesting polish that seems to appear here and there, especially when it comes to the way trading seems so easy and risk-free compared to the other options (yet being the dullest choice), but overall it’s a solid game. Provided you don’t care about the high luck factor, that is.

I’m afraid that’s as specific as I can be. My handful of games with Xia: Legends of a Drift System have been memorable and engaging, other than when they weren’t because I was stuck drifting through space or rebuilding a destroyed ship. Ah well. The price of a game about the highs and lows of luck, I suppose. The very same things that make it so unique will bore some and elate others.

If you aren’t sure which you’ll be, might I recommend flipping a coin?

Posted on December 1, 2014, in Board Game and tagged Board Games, Far Off Games, The Fruits of Kickstarter, Xia: Legends of a Drift System. Bookmark the permalink. 4 Comments.

← At Long Last, Elephants!
A Salvo of Space Expansions →