Saving Us: And Then We Held Hands

Just for tonight, Space-Biff! is going to act as my personal tell-all gossip rag. Gather round, because I’m going to spill a whole mess of secrets about my celebrity marriage.

About three months ago, Somerset (my wife, for those of you who don’t follow Space-Biff!) gave birth to a tiny baby girl. Baby Cate, we call her.

Ever since, things have been a little strained between us. Baby Cate is demanding, and Somerset does everything she can to tend to those needs. She’s good at it, this mothering business. She juggles work and the baby with aplomb. But it’s exhausting, of all varieties; mental, physical, emotional. And at the end of the day, she doesn’t have much left over for me. So we don’t really talk, or do things together. Even when we have to drive places in the car, we mostly sit in silence and wonder at how bad the traffic always seems to be.

Before Baby Cate, I was exercising. I was eating right. I had plenty of energy. Now I’m drained all the time. In my free time, my scant and desperately-defended scraps of free time, I sit around. I comfort-eat. I go on walks, but instead of moving at a steady clip to keep healthy, I just mosey. I sometimes pause to sit on the curb because I’m out of breath.

And I complain to Somerset about how we don’t talk about anything other than the baby, but in those terrifying moments when I’m honest with myself, I realize that there isn’t anything else to talk about. Ever. For the rest of our lives.

Melodrama aside (did you think I was going to sustain that crap for an entire article? That sounds horrid), the recent Print-and-Play title And Then We Held Hands is all about salvaging a failing relationship.

So even though our relationship isn’t actually particularly strained, Somerset and I decided to give it a try. So we grabbed a couple miniatures, spread out the mat, and saw if we could strengthen our marriage. Save it from inevitable doom. Don’t want Baby Cate growing up in a broken home or whatnot.

At its most basic, And Then We Held Hands is about communication. Or the lack of it.

See, the goal is for both players to move into the center space within a turn of each other. Before they can do that, however, they both need to accomplish a series of objectives — emotions that need resolving, like “Sad” or “Calm.” And you resolve them by playing cards from your hand, moving across new spaces in the process, and chaining together these cards and moves in order to reach the right space. It’s pretty basic stuff, complicated by a few niggling details.

For one thing, when you move onto a space, it modifies your emotional state — so moving across too many “sad” or “angry” spaces without hitting “happy” or “calm” spaces to bring balance back to your life will send your character spiraling out of emotional control. Spiral too far towards either extreme, too depressed or too resigned, and you and your partner “Break Up,” which is an infinitely sadder fate than any number of the “You Died” or “You Didn’t Appease Your Medieval Lord” endings that most games offer.

Or it’s possible that you’ll stay out of balance for too long, and since emotional equilibrium is the only way to replenish your hand, you’ll run out of cards. Then you break up. Or you might get stuck, with nowhere to move. Then you have a party.

Just kidding. Getting stuck makes you break up. 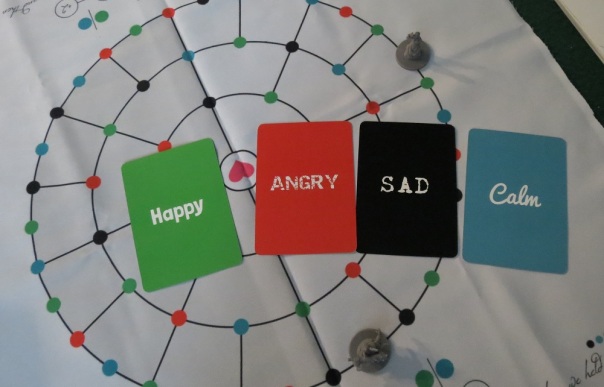 Sorting through our emotions.

Okay, so there are tons of avenues that lead to a breakup. And it’s complicated by the fact that your hand of cards changes depending on which side of the board you’re on — your “perspective,” if you will. When you’re on the left of the board, you use the left side of your cards, and when you’re on the right — well, you’re a clever kid. You figure it out.

However, when you’re in the center row, when you’re in control of the situation, you can move between either perspective at will, picking the hand that will benefit you the most. And your partner, naturally. Because of course you can use your partner’s hand of cards too. You’re in this together, after all.

However, the real kicker is this: you can’t communicate. No talking. No gesturing, no sign language, no tapping in Morse Code (that’s kind of my and Somerset’s thing). You just look into each other’s big green eyes, or blue or brown or whatever, and hope like hell that you aren’t ruining your partner’s chances of making a move next turn because you really need that “calm” card or you can’t get back in balance and replenish your hand.

This lack of communication does two things.

One, it’s weird. Supremely weird. And frankly kind of off-putting. While it may be true that not communicating is the go-to solution for the relationship troubles of sitcom couples and failed marriages, for the rest of us, communication is pretty much our staple food. ProTip: That’s how we make it work. Really, it’s that simple. Just stop keeping lame secrets from each other, Chuck and Sarah.

However, the second consequence is that the game works, especially if you accept the idea that you’re trying to save a doomed relationship that’s doomed precisely because its members don’t communicate enough.

And anyway, gazing deep into each other’s eyes and seeing the desperation hidden in your husband’s murky pools because he would really like you to please not take that “anger” card, well. That’s a sort of communication too. I don’t know if it really brought me and Somerset any closer together or anything like that, but it was a sort of revelation how well we communicate even when we aren’t allowed to communicate.

And then we held hands.

If nothing else, And Then We Held Hands is the sort of game I love to see if only because of the audacity of the thing, the willingness to experiment, to try and stretch this hobby into doing some stuff it isn’t as comfortable doing. It’s clever and inventive, and even if its central mechanism is somewhat antithetical to the central mechanism of a healthy relationship, I suspect that was intentional. I would have preferred a game about saving a relationship to be a game about communication, but And Then We Held Hands makes its point in reverse, presenting its tricky navigational puzzle and saying, “Here, look how silly-tough this is when you don’t talk, eh?”

Yep. Well said, And Then We Held Hands. Or rather, well unsaid.

Posted on April 13, 2014, in Board Game and tagged And Then We Held Hands, Board Games, Print and Play, Why Games Matter. Bookmark the permalink. 14 Comments.