Now You Can Actually Floop the Pig

Cryptozoic Entertainment has eked out one hell of a niche for themselves. Their business model consists mostly of building games around licensed properties and then selling said games to the fans of said properties, and not bothering to worry about how little they’ll appeal to everyone else.

I’m saying this because the same is essentially true of Adventure Time: Card Wars. If you looked at the header image and thought — or better yet, shouted aloud, possibly while fist-bumping your Jake plushie — “Adventure Time Card Wars?! Mathematical!“, then this game very well may be your cup of tea. And on the other hand, if you muttered something like “Why’s that kid got a hat with cat-ears on?” then, well, you might as well move along. 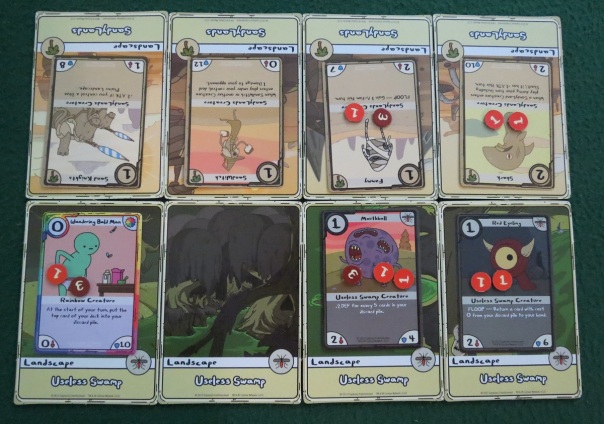 For the record, I’m a fan of Adventure Time. Not the type of fan who wears a Finn-hat or talks like Lumpy Space Princess or shouts about how I’m not cold because I’ve got a sweater on, but a quiet, admiring fan nonetheless. Thus when Card Wars was announced, I had a proportionate level of quiet, admiring excitement. If nothing else, I figured the cards would be funny to look at.

The best news of all is that both sets of Card Wars, both the Finn vs. Jake and the BMO vs. Lady Rainicorn collections, have indeed weathered the transition to card game form, and retain much of the whimsy and offbeat humor of the show. It’s rare enough for me to laugh out loud at all, let alone when playing a card game — barring the occasional devious laugh of victory — but Card Wars has managed to send me into conniptions more than once. Whether it’s the Wandering Bald Man and his tiny underpants, the twee Embarrassing Bard, the tongue-in-cheek flavor text on the Sand Angel, finally seeing The Pig in action and realizing just how devastating he can be to enemy cornfields, or just the sheer pleasure of playing a game that is actually a decently faithful representation of the duel played out between Jake and Finn on the show, Card Wars doesn’t skimp on color or eccentricity. Sure, some of those jokes lose their luster on the second and third telling, and not every card is as mischievously playful as the best of them, but as a whole it gives off a pleasing vibe.

“But what about the game?” I can hear you asking. Good question, though the answer isn’t quite as clear or as nice. It’s… fine? I’ll explain. 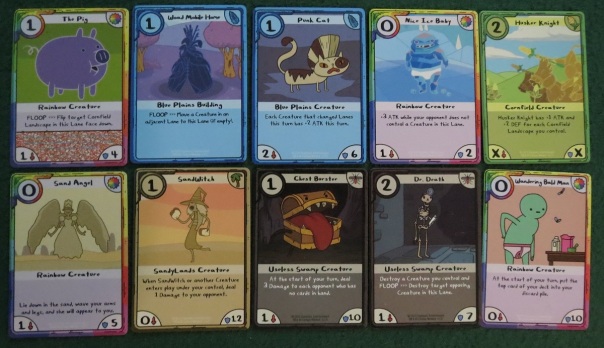 Red decoder card included, so you can read the bonus text on The Pig.

Card Wars is a lane combat game in which your goal is to reduce your opponent’s life to zero. You do this by filling up your lanes — built from landscape tiles like Cornfields or Useless Swamps — with creatures and buildings, and killing your opponent’s creatures so your guys can rush across the lane unopposed to deal damage to the enemy player. Chances are you’ve played something like this, very possibly on a free Flash game site. And if not, don’t worry; it’ll take you all of thirty seconds to get a handle on.

To keep matters simple, there isn’t any economy to worry about other than the cards in your hand and your two-actions-per-turn limit. Creatures, buildings, and spells will cost one, two, or zero actions to use, so most turns will only see you playing one or two cards, while rare turns will have you also playing the occasional zero-cost spell. You can replace creatures with other creatures, a great way to remove wounded troops before they die and leave your lane vulnerable, and buildings usually offer mild buffs, like extra hit points to the creature with whom it shares the lane. Spells can do all sorts of things, but never anything overly complex.

It is, as you’ve probably already sussed out, rather simple.

In a way, it plays like Magic: The Gathering, minus any economic worries or summoning sickness, and with automated assigned blockers (thanks to whichever lane you’ve assigned your creatures). You play creatures into hopefully-synergistic positions, exhaust them when they attack or “Floop” when they use abilities (which is exactly the same as M:tG’s “tapping,” except it’s called “Flooping” and is therefore much funnier), slowly drain your opponent’s life, and hopefully draw the right cards to sap them before they sap you. Of course, Card Wars also lacks M:tG’s decades of fine-tuning; but then again, it also currently lacks the intimidating real-life financial investment, so take from that what you will. 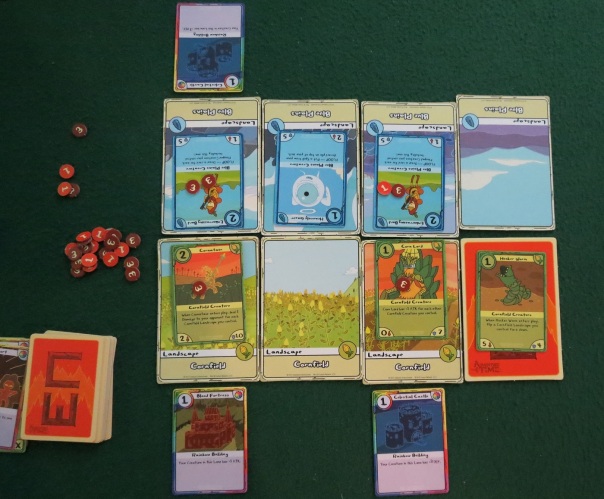 Card Wars also bears something in common with other, more “serious” games. For one thing, each deck has its own flavor, whether the corn-fueled abilities of Jake’s deck or the discard abilities of BMO’s “actually-yes-it’s-often-useless” Useless Swamp deck (no, truly, it’s weak). There are a few cards in there to encourage customization, like the Sand Knights that deal extra attack when played onto a Blue Plains landscape or the Immortal Maize Walker found in the swamps deck who performs better in Cornfields. I’m not sure how many people will stick with Card Wars long enough to bother with any deck customization more intense than swapping out a single landscape to empower these occasional creatures, or whether Cryptozoic will actually support this game with more card packs, but it’s a nice feature.

Overall, it’s the same type of card game that Adventure Time is a television show: basic and colorful and elementary enough that kids will get along with it, but not so simplistic and boring that adults will hang themselves if they’re forced to play it. In fact, like the show, it’s just off-kilter enough that you’ll very possibly find yourself enjoying the proceedings in spite of yourself. It’s a novelty, but there’s nothing wrong with that. I intend to keep it in my collection for introducing my kids to games in a safe and simple setting that will hopefully appeal to them, and maybe for trotting out for a game with fans of the show for an easy chuckle. And if I have to earn that chuckle by forcing them to play the Useless Swamp deck, then so be it.

Today we learned that Adventure Time: Card Wars is a pretty good game, and also that Dan doesn’t laugh out loud very often. If you’re considering buying Card Wars and you’d like to make Dan laugh out loud at the same time, you can pick up Card Wars through Amazon using these handy links, for either Finn vs. Jake or BMO vs. Lady Rainicorn.

Posted on February 23, 2014, in Board Game and tagged Adventure Time, Board Games, Card Wars, Cryptozoic Entertainment. Bookmark the permalink. 1 Comment.