I don’t make suboptimal moves on purpose. Okay, that’s a lie. If I’m teaching a game, or a friend seems like they need a win, or the current best move will just piss off everyone at the table, then sure, I’ll intentionally make a less-than-ideal move now and then. Just to keep things breezy. But not when I’m playing solo games, because nobody will get angry because I’m winning or store a grudge for next game or flip my handcrafted game table. When I’m playing alone, there’s simply no reason to take any move other than the best one I can see at any given moment.

That is, until I played Freedom: The Underground Railroad. Let me explain.

The first steps towards freedom.

For my readers who know literally nothing about US history, Freedom: The Underground Railroad is about the American abolitionist movement in the early to mid-nineteenth century. It’s a cooperative game, because although many players of board gamers are happy to play as rampaging orcs or murderous aliens, taking on the role of a slave catcher would undoubtedly make nearly every human being minus sociopaths experience at least mild discomfort.

So you’re an abolitionist, an agent of the Underground Railroad. As such, your goal is threefold. First, shepherd a certain number of enslaved families from their plantations in the south past gangs of slave catchers, carefully picking a route through the northern states and into freedom-loving Canada. Second, sway the opinion of US policymakers towards abolition. Be warned, it’s going to cost you. And third, don’t lose too many groups of slaves. Oh, and the game is on an eight-round timer, so you’ve got to accomplish all three objectives with very little margin for error.

Here’s the situation: I’m playing the solo game, and it’s my goal to get five families to freedom. We’re coming down to the wire — I’ve nearly lost my limit of twelve groups of slaves, there are only two rounds left, and although I’ve successfully garnered enough support to win, I’ve got a couple opposition cards breathing down my neck. Namely, Vice President John C. Calhoun is strangling my funding and the Gag Rules are severely limiting my options by only letting me purchase one action token instead of the usual two each round.

This means I need to get a couple more slaves to Canada before too many slave ships deliver cargo that the plantations can’t hold, thus losing both the slaves and me the game. If I do this, it’s going to be close.

And I can do it. I’m holding action tokens that will let me move enough slaves to succeed, and while none can currently make it past the net of slave catchers that have made a devastatingly efficient cordon across Iowa, Indiana, Ohio, and Pennsylvania, I do have one option.

I can sacrifice someone. Only, let’s not sanitize it: I can sacrifice a slave. A family of slaves, free from a lifetime of bondage and likely even some form of torture or separation from their loved ones, hoping for freedom. By first moving that family into Cincinnati, I’ll draw the attention of the slave catchers in Chicago and Cleveland, clearing the way for two groups of slaves, one in the west and one farther east, to slip across the border.

It’s the optimal move. And it’s allowed — even the manual spells it out right there on page six: “Players may choose to move a slave in any direction, including backwards, to either gain financial aid or to draw the attention of the slave catchers on the board.” 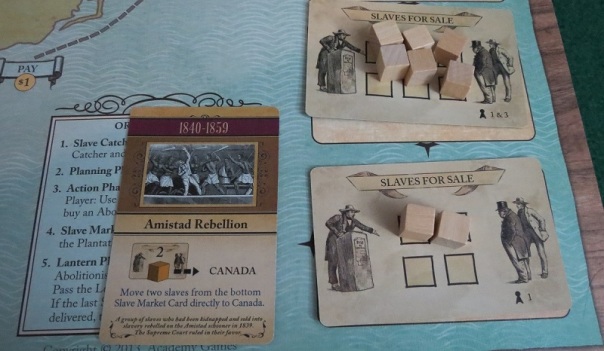 I sit there, looking at the board. There are ways to rationalize this. To justify making the optimal move. For one thing, once I sacrifice this family, this one little family, we’ll have changed the United States’ policy on slavery! Then they’ll be free anyway! Notwithstanding their forcible return to the south and the ensuing racial problems of the following decades, but still. And anyway, why am I even worrying about these guys? They’re not real. They’re wooden cubes.

But in their own way, they’re real enough to make you care. That’s how Freedom: The Underground Railroad gets under your skin, forces you to worry about those little wooden cubes. That’s how it makes you give a little cheer when you enact the bloody rebellion aboard the Amistad, or for the outbreak of the Civil War just because it’ll pause the slave catchers for a while, or the caning of Charles Sumner because it builds your political capital. Sure, Frederick Douglass just gives you some extra cash, and the Dred Scott Decision just sends a handful of cubes back to their starting space — except it’s not just some extra cash or a handful of cubes, it’s money you need to sway opinion towards freedom and a handful of terrified families.

Slipping across the border.

Leaving all of that aside for a moment, it’s also a pretty dang good game. The main aspect comes down to a puzzle of positioning. Slave catchers move along set routes, usually in response to the appearance of slaves in particular spaces, and at random at the start of each round to spice things up and keep the game from developing a single winning route. It’s dynamic and tense enough to provide a unique challenge each time, but predictable enough to push you through the main portion of each turn without too many irritating surprises.

The other half interlocks smoothly with the first, as you gather funds (reliant on the movements and positioning of the slaves you conduct to the north) and use them to buy more conductor or support tokens, or take advantage of the abolitionist cards on offer. Since fundraising tokens can grant a whole lot of extra money if you’ve positioned slaves in the right places, there’s yet another angle to the balancing act between the needs of your wallet and the needs of your conscience, as you waffle over whether to rush those families across the border or position them in northern cities to espouse the evils of slavery.

Perhaps best of all, every move can be re-evaluated, re-optimized. For instance, when it came to my crisis of conscience, I didn’t sacrifice that family of slaves. Instead, I knuckled down and found another way. It was difficult, intricate, and nearly broke my brain, but I did it, bouncing fundraising off my character’s ability to buy another action token and enlist the help of the right abolitionist to move enough slaves across the border. Rather than a two-move action that ended with a somber win bought with one sacrifice too many, it was a five or six-move absolute victory. It was also one of the most satisfying wins I can remember.

Freedom: The Underground Railroad is like that. Educational without being boring, puzzley without leaning towards the deterministic, and eye-opening without getting preachy. This is the kind of game I’m going to drag out of the closet when I want to teach my offspring about some actual US history, and I’m already looking forward to it.

If you’re thinking of picking up Freedom: The Underground Railroad on Amazon, why not support Space-Biff! at the same time by clicking this freedom-promoting link?

Posted on February 20, 2014, in Board Game and tagged Academy Games, Alone Time, Board Games, Freedom: The Underground Railroad, The Fruits of Kickstarter, Why Games Matter. Bookmark the permalink. 6 Comments.