← It Means “Not for Dummies” in Czech
Alone Time: Suboptimal Moves →

It wouldn’t be a Tuesday in February without a look at another print-and-play title from Todd Sanders, or at least that’s what my grandma used to say once the dementia had really dug in its claws. Our previous features of Todd Sanders’ work have mostly focused on his solo and two-player efforts, but today our topic is They Who Were 8 — or They Who Were ∞, if you’re an altcodemancer — which is a four-player team-based microgame about a jealous pantheon of gods as they seduce, give birth to, and conflict with one another. Just another day at the Mount Olympus office for these guys.

They Who Were 20, including reference cards.

Most of Todd’s games are fairly streamlined, but this is easily the simplest I’ve played so far. Weighing in at only twenty cards (including one for rules and another for reference), plus two stacks of tokens (which could be two types of coins), it’s a dang easy project for home printing.

It’s also every bit as slight when it comes to mechanics as it is in material. Players seated across from one another are paired into teams, assigned two gods each, and given two action cards. On your turn you play an action, hopefully coordinating with your teammate a bit in the process, maybe make use of your once-per-game god action, and after everyone has had a turn, pass your remaining action card to the left and replenish your hand. The action cards, of which there are only ten, are similarly simple. Some add tokens from one of two stacks, whether point-awarding glory or point-sapping infamy, some remove those tokens, and some move or swap them. Play proceeds until either stack has run out, and then it’s time to assess your team’s performance, taking into account your accumulated tokens and whether your god used their ability or not.

That’s it. It’s modest, sometimes feels like it could have used some sort of third mechanism to give it a bit more punch, and also, unexpectedly, good mindless fun. 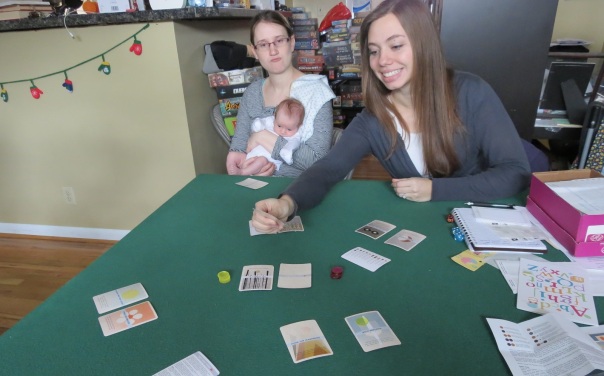 In all honesty, I’ve struggled with this review because I don’t feel like I have a finger on the pulse of They Who Were 8, and I’m not sure whether that’s a result of me not clicking with it or because its heartbeat was faint to begin with. The card art and design are unique and evocative, as is to be expected from Todd Sanders at this point, but it has much less bearing on the game itself than we’re accustomed to seeing. Nobody, for instance, dwells long on the implications of Cassana Who Was Loved disguising herself as Rymon the Uncaring, and it’s a bit strange to feel so disconnected from the theme of a Todd Sanders game.

There’s also very little real control over your destiny, which could be a commentary on a cyclical and deterministic pantheon’s numbingly rote existence — and of course I’m being silly, but still, there isn’t much floor space on display for tactical thinking or deep decision-making. It sometimes feels minimal for minimalism’s sake.

Then again, does that matter when I’m having a pretty good time with it? I might crave a bit more complexity, but it only takes a slender five to ten minutes to set up, explain, and play, which speaks for itself and makes it a sort of super-filler that can actually squeeze into that awkward weekly “Geoff says he’ll be here in fifteen minutes” window. Even better, the endgame accounting is often tense and exciting as players realize they used one too many god powers or didn’t divert some of their infamy to an unfriendly god, or just didn’t set up any sort of plan with their partner. It doesn’t do much, but what little it does, it does well.

For a good time, but still a bit perhaps an overly-dainty one, I’m going to spurn the pun and give They Who Were 8 the safest score ever invented: a seven out of ten.

Posted on February 18, 2014, in Board Game and tagged Air and Nothingness Press, Board Games, Print and Play, They Who Were 8, Todd Sanders. Bookmark the permalink. 7 Comments.

← It Means “Not for Dummies” in Czech
Alone Time: Suboptimal Moves →