Back in October I decided to roll the dice in the official Summoner Wars iOS Tournament and prove myself the premier Summoner Wars player of all time. Turns out I’m not. Even so, I did a lot better than I assumed I would, coming this close to making it into the third round (of four, in case you were wondering). I took screenshots of most of my games, and meant to do a massive post-tournament writeup, but certain constraints (like not winning) kept me from it.

Well, I figure I can talk about a couple of the games though, considering I have all these hundreds of screenshots. The first match is a win from the first round — it’s actually the win that placed me at 3-2 in my division, and going on to the second. It’s an epic win, full of tense moments and nick-of-time maneuvers. At no less than two points I nearly hurled my iPad across the room, and was only constrained by the damnable fragility of the thing. But. Despite the thrills this match offers, this isn’t an example of how to play Summoner Wars well. Not in the slightest.

Before we get into the real action, I need you to understand two things.

First, I chickened out with my deck. Thinking myself much cleverer than I actually am, I’d prepared a psychological trick for the tournament. The gist was that I would play the entire first round as a faction I’m not all that great at, and play them with an uncommon style, and hold back my better factions for later rounds. There were a couple problems with this scheme — firstly, I was assuming that late-game contestants were going to spend a lot more effort countering each others’ early decks than they actually did; and secondly, it severely limited my options. See, there are sixteen factions in Summoner Wars, but only eight have made it onto iOS so far: Cave Goblins, Cloaks, Fallen Kingdom, Guild Dwarves, Jungle Elves, Phoenix Elves, Tundra Orcs, and Vanguards. Certain factions (the Fallen Kingdom in particular) were so tricky that they were out entirely. I needed a faction that I was competent with, one I’d practiced with, but not one of my two main factions.

Vanguards it was, then.

The Vanguards are the “normal” faction, the heroic knights and priests and angelic forces that stand against the tide of darkness, at least in the lore of Itharia. In practice, they’re every bit as likely to murder their own units for some extra magic, but hey, those are the times. The main thing you need to know about the Vanguards is that they’re usually pro defenders. All their common units have two life points, and they’re one of the only factions with a reliable way to heal their troops, which lends itself well to solid formations around healing priests. Not that I was planning on playing that way — in order to surprise my opponent, I’d constructed a tried-and-true assassination deck, designed to overwhelm my enemies with a wall of metal and horseflesh. I’d had good feedback too. Usually cusses and forfeits. Always nice.

But then, when it came time for the tournament to begin, I panicked. My assassination deck was a bit like a freight train — massive and unstoppable, but it took a while to get going, and now I was wondering if my competitors might be experienced enough to cripple my offense before it even got started. To lay some logs out on those tracks, as it were. So instead, for each of the five games of the first round, I loaded up my Offense-Option deck.

Not that this was a bad deck, but it was certainly unfocused. Which was sort of the point — to give me options. Lots of expensive champions, so the chances were I’d only afford two of the three, and a little bit of everything in the commons department. It had worked well in the past, but it wasn’t nearly as ready as my Vanguard Assassination deck.

The second thing you need to understand is this:

Grognack, summoner of the Tundra Orcs.

My opponent in this game was glenn3e, a player with a much longer game history, more confidence, and, probably, better hair. He, like two of my other opponents in the first round, had decided to march the obnoxiously-simple Tundra Orcs into battle. If you don’t know the Tundra Orcs, they’re the blue dudes who like to take chances. Meaning they roll lots of dice. Which often translates into lots of hits, and lots of wins.

If you aren’t familiar with this matchup, you can see the starting setup in the top pic. I went first, meaning I could only move two units rather than the usual three. So I did my usual start, bunkering down in such a way that everyone was close together, and my priest could reach anyone in one turn. And then we were off.

Even at the start things didn’t trend my way. The Tundra Orcs froze Sera Eldwyn, my summoner. If you play Summoner Wars, you know what a pain in the rump Freeze is, and if not — well, it freezes one of your units, and you can’t thaw them out without spending two magic points. And glenn3e put two Freeze cards on Sera, meaning I’d have to spend four magic. I could regale you with a long boring discussion about how horrible the Freeze event is, but I’ll spare you here.

With Sera out of action, glenn3e saw and took the opportunity to wade Grognack into the fray. It’s usually a big no-no to use your summoner in combat, but Grognack is a fair bit tougher than most, with the downside that he’s a melee fighter. Not that it mattered here, since all of my troops were melee fighters too. So Grognack went about his bloody work, taking out my guys left and right. Fortunately, a few of my knights proved extremely capable at reliably landing hits, and after three wounds (of a total of seven life), Grognack pulled back. The center of the battlefield was now gridlocked. Most of the fight was happening on my side of the board, as fights with the aggressive Tundra Orcs are wont to go, but I was holding my walls and even occasionally darting a Cavalry Knight off onto their side.

This is a bit of a play on words, because the middle third of the game was defined by the slog going on in the middle of the board. Even though we were both taking heavy losses, and neither of us had room for any fine maneuvering, it looked like I was losing the long battle, as the high-damage orcs were managing to kill my men just that bit faster than I could kill theirs. If I wanted a chance of victory, I needed to do something dramatic — like bring in a champion.

I had two in my hand, but I decided on Archangel. I’d already put three wounds on Grognack, and Summoner Wars is determined by whoever kills the enemy summoner first, not who wins the fancy maneuvering or the economy game. I mean, those things help, but it can be easy to lose sight of the prize. Archangel, with his ability to move three spaces and fly right over other cards, felt like the exact right tactic for diverting the enemy away from the middle, and perhaps landing a couple more hits on Grognack. So I spent the minor fortune to bring him into battle, then flew him over the entire skirmish. There he stood face to face with Grognack, raised his mighty sword, and landed a single hit.

That’s when things started to fall apart. On the Tundra Orcs’ turn, they moved just enough troops back to wipe out Archangel in a single flurry of damage and feathers, and then they were ready to be flung back into the middle without much of a delay. My front line began to collapse, and space by space my surviving troops fell back, probably hoping for healing from Sera Eldwyn. Who was still frozen.

As the Tundra Orcs exterminated the last of my troops, I made one final desperate assault on Grognack. I summoned my last champion (the other had been transformed into magic), Kalon Lightbringer, and charged him forward. Both sides had hardly any resources left, and although Kalon couldn’t kill Grognack this turn, I was hopeful he might survive long enough for a second attempt. It was looking good when he landed two hits, leaving Grognack only a single life point left. Kalon himself had eight. Surely he could survive one Tundra Orc turn?

This was the first time I nearly threw my iPad. On that enemy turn, the Tundra Orcs did something on every single phase to leave me more beaten. I considered forfeiting a game for the first time.

To start, things weren’t looking good anyway. I might have had Grognack cornered, but he certainly had some options up his sleeve. In addition to Grognack, he had three troops out on the field, including the overwhelming champion Krung. I had a frozen summoner, Kalon, and a single Cavalry Knight that had galloped up the left to hopefully provide a contingency against Grognack if Kalon were blocked.

That lone hope was dashed when this was summoned, right in the path of my Cavalry Knight: 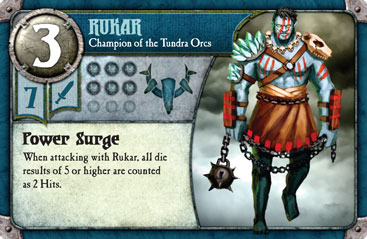 Rukar, who can do double damage on high rolls. Gulp.

This sucker punch was followed up with a groin shot when glenn3e played his final Freeze event, blocking Kalon in place. As I said, it takes two magic to un-freeze a unit, and I only had one.

Worse, enemy movements positioned Grognack in a safe place and surrounded Kalon completely. There were no avenues of approach. The left was blocked by Rukar, the right by a common Thwarter.

Then, during their attack phase, the Tundra Orcs killed Kalon. In one turn. Not that it mattered, since Kalon was frozen regardless. Still, sort of a bummer.

As far as I could see, the game was over. I had one magic and one card in my hand—

Wait. The turn before, I’d been holding a Cavalry Knight and an Angel, with no magic. Normally I’d hold onto the Cavalry Knight because Angels are one of those units that sound cool but in practice never actually pull off anything useful. And this isn’t only my opinion — I’ve yet to talk to anyone with a high opinion of Angels. But for some reason, perhaps a whispering voice from on high, I chose to turn the Cavalry Knight into magic and hold onto the Angel.

And as it turned out, there was a single space on the right side of the field where I could summon the Angel, and only a Thwarter — which he could easily fly over — between him and Grognack. And Grognack had only a single life point remaining, and the Angel could roll one die.

A two in three chance, out of nowhere. Or from above. Y’know, wherever.

And, well, that’s exactly what happened. I spent my last magic point to summon my last card. And that card, an Angel, flew over the Tundra Orc Thwarter and poked Grognack in the belly with his lame little standard. And Grognack exploded into summoning energy, and presumably his army melted or something. Nothing short of divine intervention. I almost threw my iPad, this time for joy.

Posted on November 27, 2012, in Board Game and tagged Board Games, iOS, Plaid Hat Games, Summoner Wars. Bookmark the permalink. 2 Comments.