The Walking Dad: A New Day 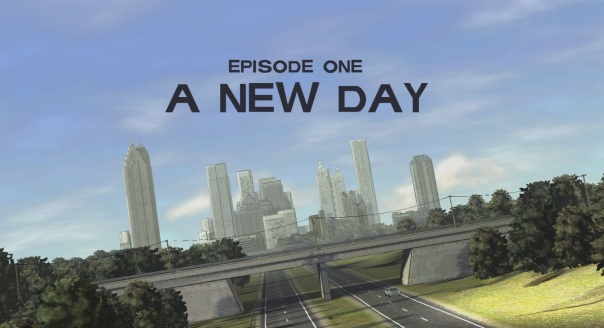 A diorama of Atlanta.

Hi there, loyal Space-Biff! readers! Today we have something special planned—a guest review/impressions piece from a dude named Lee Everett. Lee is going to tell us all about the first episode of The Walking Dead, despite the obvious conflict of interest that arises from him being its protagonist. Oh well. There’s no such thing as an objective review, anyway! Find all about his adventures right after the jump! 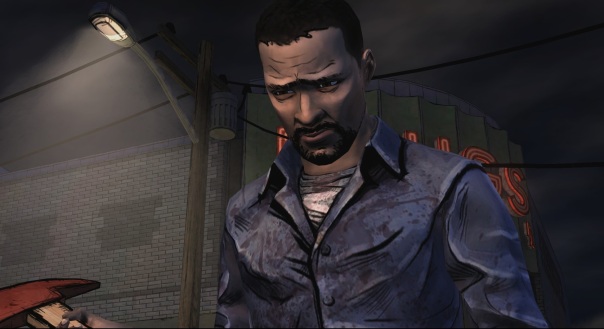 Hi guys. My name is Lee Everett, and I’m the star of The Walking Dead—the video game, not the comic book series or board game… You say there’s a TV show? Nah, I don’t think so. There’s no way that kind of silliness would get green-lit. Anyway, I know what you’re thinking: Isn’t that the new episodic game from Telltale Games? Now now, I know you’re feeling a bit judgmental, because you’ve probably recognized the word “Telltale” as associated with the pretty so-so Sam & Max reboots, or maybe Puzzle Agent or Strong Bad’s Cool Game for Attractive People, or those Back to the Future games where they found some kid who sounded more like Michael J. Fox than the man himself. Even more spuriously, they also made some CSI games that you probably didn’t hear about, which is fine because there’s no point in taking anything with “CSI” in its title seriously, at least until they put some quality actors into lead roles. Maybe someone like Keanu Reeves or Carrie-Anne Moss.

Sorry, I have a tendency for self-distraction. Probably because here after the apocalypse, you make your own entertainment or things descend into drama. So anyway, I’m here to tell you that The Walking Dead is actually pretty damn impressive—and when I say “pretty,” I mean “really.” And when I say “really,” I mean “monumentally.” So if Lee is too formal, you can call me Post-Zombie-Apocalypse Dad, because I’m going to tell you about The Walking Dead by explaining how it made me feel.

How did I feel, you ask? Well, that’s getting a bit ahead of ourselves, but I’ll bite: I felt suspicious. Not in the sense that something was tickling my suspicion-lobe; I mean I felt like I was making everyone else stare at me like I was an unattended bag at the airport, and they were having trouble deciding whether to report me and delay their flight or ignore me and risk getting themselves blown up. 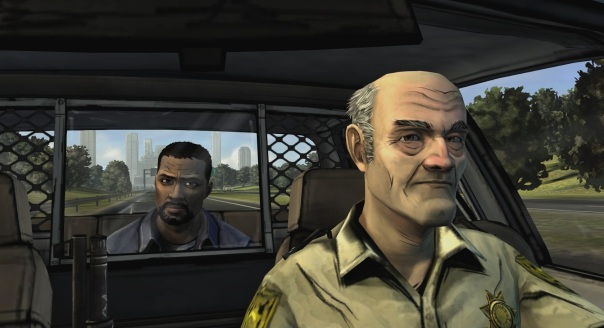 Me in the back of a police car.

See, that’s me. And before you go thinking that’s how cabs look Down South, let me assure you that one, you’re an ignoramus, and two, I was in police custody for a crime I did—and I say again, I did—commit. I’m not proud of it, but he was in the sack with my wife, and I’ll contend that they only gave me life because he was a senator—the big kind, not some state senator that you can rub out and nobody even notices until they want to complain about the construction on their street taking too long. Again, not that I’m proud of what I did.

Less than an hour and a little over a car crash later, that nice officer wasn’t looking quite as bald. He looked more like this: 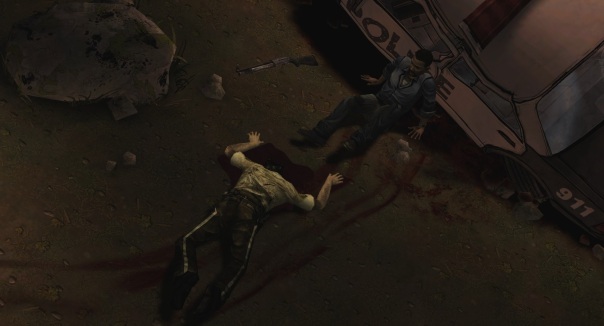 The dead, risen. Well, risen and then un-risen. By a shotgun.

After we crashed into someone stumbling through the street, I awoke to find that my leg was badly hurt and the dead were walking. Again, I had to do something I wasn’t proud of, and soon enough I was stumbling through the woods, hoping to escape the modest horde that had accumulated upon hearing me re-kill that police officer.

I came to a fence and hopped over, and none too soon a shot in the distance had made the zombies wander off in its direction. It was now safe enough to look around, and since I didn’t know the extent of the problem, I thought maybe I would be able to find help.

You might be able to say I found help, though it might stretch the definition a bit. I found Clementine. 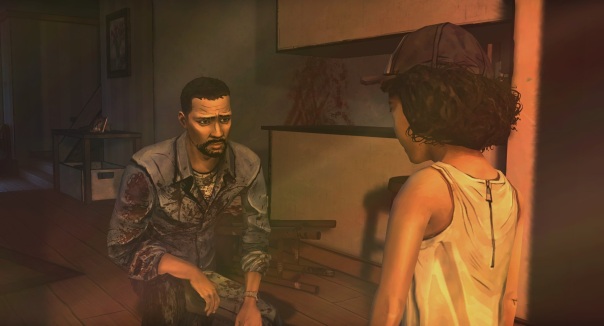 Me as a father figure.

Now, I know you’re thinking that the introduction of a little girl at this moment is a bit of a scriptwriter’s staple. That it would collide my independent self with my natural paternal nature. That it would crack my killer’s shell.

And, well, you’re right in part. Not that I had a killer’s shell, or that that’s a thing at all. But it’s a staple for a reason, and Clementine had been surviving on her own for a while now. She even helped me survive being attacked by her zombified babysitter, and boy was that shockingly gory for a game by the company that developed Bone.

I said some fatherly things to her (I was flailing in the dark, really), and convinced her to travel with me—I had heard on the answering machine that her parents were in Savannah, and there was no way I was leaving a little girl stranded in the middle of a zombie apocalypse like that—and we started to look for a way out of there. I was determined to be a good protector, for as long as our arrangement lasted. If you’re thinking that I took her on as a tool of redemption for my past sins, you’re doing me a disservice. I really do try to be a good man. 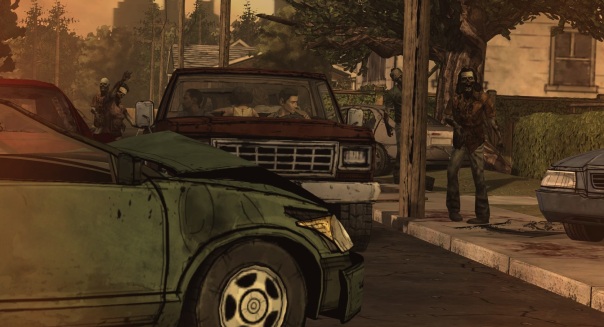 Escaping the zombies with some other survivors.

Serendipity was on our side: Two scavengers were right out in front of Clementine’s house, trying to push some cars out of the way so their truck could pass. Helping them out seemed like a surefire way out of the city.

But here’s where the first “feeling suspicious” stuff kicks in. I’d been doing well at the Dad thing for five minutes, so I figured I could keep it up for the foreseeable future. And then Shawn, one of the two scavengers, had to go and ask me how I knew the girl.

I couldn’t just answer, “I was on my way to the state pen and the car crashed and I hopped a fence and now I’ve semi-kidnapped this girl”—could I? So I said that I was her neighbor. And Clementine looked up at me with her big brown eyes and scrunched them up a bit. She didn’t say anything, but I knew she understood I had just lied. What a great second impression. 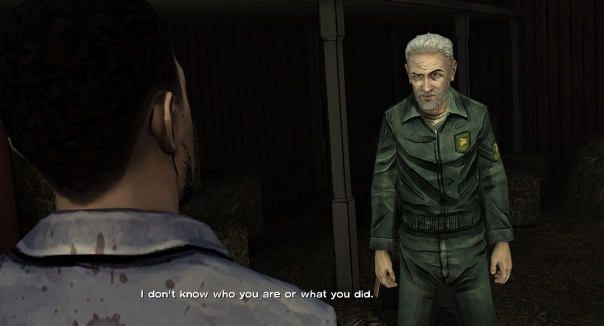 A grumpy farmer grills me.

When we got back to the scavengers’ family farm, things got worse when it turned out that Shawn’s dad not only smelled deeply of prunes, but was also much more naturally inclined to suspicion than his son.

“Do you know this man?” he asked Clementine.

She paused, looking between me and Hershel (that’s the old guy). “…Yes?…” she squeaked.

Strike two. Now I’m not only lying in front of the kid, I’ve made an eight-year-old lie for me.

I resolved to be honest after that, but every one of Hershel’s questions sounded like a judge reading off the jury’s verdict. I half-expected him to ask, “What’s your con, son?”

Instead, he asked stuff like, “How’d you get hurt?” Car accident. True enough. “Where were you going?” Just out for a drive…

And then, I saved the situation. I tell him that a cop was giving me a ride, and somehow the ring of truth was enough to placate him. “That’s nice of him,” Hershel said. 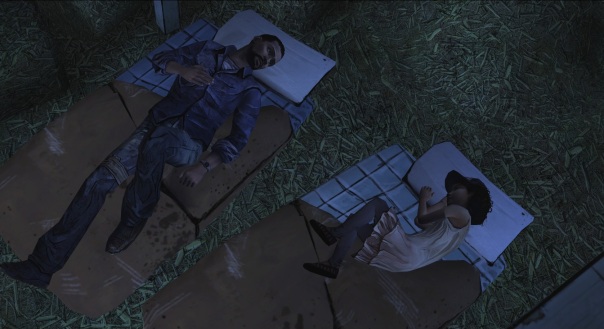 Me and Clementine, sleeping in the barn.

The world is ending out there, who cares who I am?

See, I think some of the appeal of the apocalypse is that it’s a kind of rebirth. We’re erased and born again as wasteland heroes, slayers of the undead and biker gangs. Only problem is, my blank slate is still covered with a chalk outline—my face and name were on TV and in the papers, and someone’s bound to recognize me sooner or later. In fact— 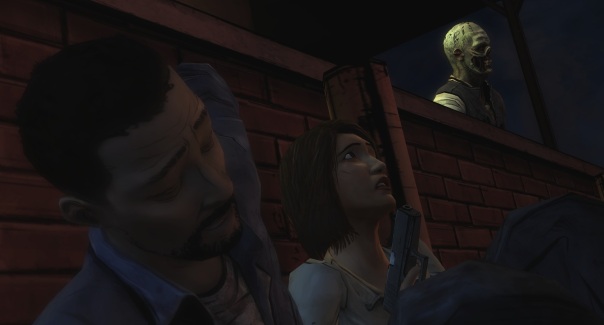 —Oh, now Dan is telling me that I need to stop telling my story, for fear of spoiling the whole first episode. I wish I could tell you about some of the choices I made along the way—about the difficulty of choosing who lives and who dies, especially when the choice comes down to an incompetent computer nerd or an incompetent who can’t even figure out how to put batteries in a radio [Hey! Enough spoilers! —Dan], but I guess those will have to wait for some other time.

But look, here’s the main thing: This game isn’t as silly as those other ones made by Telltale. It’s good. The dialogue is believable and taut, and the scenarios are compelling and tense. And it’s got a studmuffin of a protagonist.