← Being Tzeentch: Chaos in the Old World
The Walking Dad: A New Day →

Okay, so Metro 2033’s first act left us good and depressed. The world is broken, and it’s painfully unlikely that humanity’s dreams of rebuilding it will ever be realized. At best, humanity can hope for the relative dignity of extinction. Yay.

And then the second act comes along and plays with what we already know about the bleak Moscow underground. Tonally, it’s a complete one-eighty from Artyom’s early adventures. Not in terms of bleakness—things are still outlandishly grim. It doesn’t inject cheer or hope or anything like that. Instead, it gives its world a shot of religion, and mulls a bit on the state of mankind’s soul.

“The devastation we brought upon ourselves was complete: Heaven, Hell, and Purgatory were atomized as well.”
— Khan

There’s a great statement in the novel that’s often paraphrased in the game despite never being explicitly laid out. Artyom is talking to a man old enough to remember the surface. He ruminates on the glories of the past: girls giggling in the park, distant laughter, ice cream. Simple little things that he took for granted and that Artyom doesn’t even possess the mental vocabulary to understand. After rambling for a bit, he pauses for a few minutes, then sighs, “Lord. What a splendid world we ruined.”

As the first act neared its end, Artyom traveled into the wide world and witnessed firsthand the devastation that humanity had wrought upon itself. It showed us that humanity’s huddled existence in the Metro was basically just—it wasn’t the result of chance; it was because we screwed up. This theme, of humanity getting what it deserves, lingers in the toxic air.

The second act begins with a smaller version of the same theme. As soon as Artyom and Bourbon descend back into the Metro, Bourbon is captured by unsavory types and Artyom finds himself alone in a station populated by well-armed bandits.

It’s a bit more complicated than that though. See, Bourbon gave himself up willingly, because these bandits are the very people he was traveling to see. The game doesn’t bother spelling out the exact relationship between Bourbon and these men, hinting at debts and dishonor, but at any rate it’s clear that Artyom’s mentor has somehow brought his unpleasant fate down on himself—another instance of people reaping what they sow.

And now the game lets you put what you’ve learned into action, and you get to handle the situation how you see fit. I mentioned before that Metro give you a bit of latitude in terms of how you approach situations, and that without being told that you’re being watched, you’re shaping who you are. Which, if Metro 2033’s theme holds, determines what you get.

So, as Artyom, you can either sneak through the station (even possibly not killing anyone), or you can blaze a crimson swath of murder to the room where Bourbon is being beaten by the station boss. Either method lands you at the same destination. The only thing different is you.

The ghosts of the Metro.

Along the way, you receive help from above—and by “from above,” I mean from the ducts lining the roof of the station. As you sneak or kill (or both) your way through the station, arrows take down select enemies, making survival a much simpler prospect. When you reach the final room, and watch as Bourbon and the station boss kill one another, your hidden helper is revealed: the mysterious Khan, who drops from the ceiling and offers to lead you away from this place before a pack of vengeful thugs catch up to you. I don’t know what happens if you don’t accept (that would be idiotic), and thus, the main body of Act 2 begins.

As it turns out, Act 2 is tricky to talk about for a couple of reasons.

The first is that it’s short. Act 1 was long, and so are Acts 3, 4, and 5. Act 2 can be completed in under an hour, and you’re not generally in much danger; and in a way, it feels like an extension of the first act, because for most of its duration your job is to walk behind Khan and absorb exposition. Even what little combat you encounter will be mostly handled for you, and the hardest tasks are holding still for a bit.

The second reason that Act 2 is tough to talk about is because it’s all about religion, which is a subject I generally prefer to avoid here on Space-Biff!

Most of the Act goes something like this: Artyom follows Khan through an abandoned tunnel while Khan talks about spiritualistic and religious stuff, shows you an electrical anomaly that exists beyond science, teaches you to avoid touching or offending shadowy spirits, and helps you dodge a ghost train.

An anomaly wipes out a pack of attacking mutants.

Anyway, I’m going to drop my no-religion policy for two minutes. See, religion fascinates me (yes, that’s why Wee Aquinas is the current SB! mascot, and no, I don’t “believe” in him and I’m not quite sure what you mean by that anyway). At the same time, I find myself decidedly un-fascinated by religious folks in video games (also in many movies and especially television programs), who generally fall into one of three categories:

1. The Ex-Believer. This is the guy who once believed but now doesn’t because aliens/bombs/whatever. He gets unreasonably grumpy at others’ mentions or displays of belief, though after something heartwarming happens he gets a longing look in his eyes when someone starts saying the Lord’s Prayer, which is for some reason the Only Prayer, or when in a moment of distress he stumbles upon a religious icon of some sort.
2. The Benign Believer. This is the person who believes even though aliens/bombs/whatever. She delivers condescending platitudes about faith “just being about believing,” which unfortunately will work at some point in the narrative. She will not force her beliefs on anyone, except for bringing them up like every two minutes, and The Ex-Believer is very insensitive to her.
3. The New-Era Believer. This is the cultist who worships aliens/bombs/whatever. He has gone to the trouble of generating entirely new theologies and possibly scriptures to align with this brave new world, and he’s appropriately bonkers. Chances are he doesn’t actually believe anything he’s saying, but he’s assembled an entourage of castoffs to help him do something silly or sinister.

Guess which one of these Khan is? 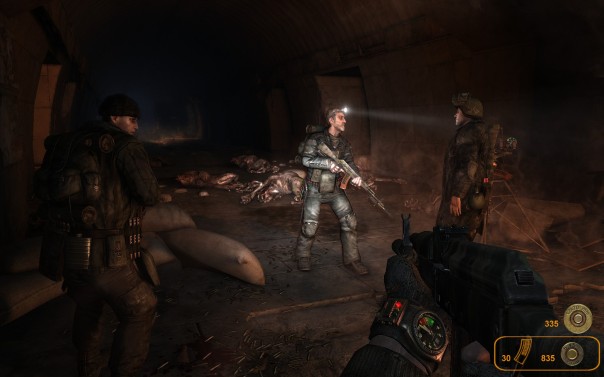 If you guessed “none of them,” then you just earned a space penny. In much the same way real-world religions gradually transition their doctrines to account for change, Khan has taken preexisting beliefs—in this case, Christianity—and adapted them into a workable theology to explain the phenomena that he sees around him. Which is pretty much how you’d expect devoutly religious people to adapt to massive changes—like, say, a nuclear holocaust. He posits that when the bombs went off, heaven and hell were destroyed as well as the surface world, and that the spirits of the dead linger in the Metro as a punishment for humanity’s collective sin. And if you’re thinking that sounds familiar, it’s because you’re hearing that same theme for a third time in under an hour.

Is Khan right in these beliefs? Probably not, especially with the Dark Ones getting up to all manner of psychic hijinks. But still, there are spirits right there, moving out of your path so long as you’re reverent and fearful of them. And there’s a ghost train whipping past your face. And strange electrical anomalies zapping monsters for you. Khan’s theology may or may not be correct, but it’s working for him.

A shrine for the fallen.

And then, if you’re dense, Khan just spells out the theme. “You reap what you sow,” he tells you. “Force answers force, war breeds war, and death only brings death. To break this vicious cycle, one must do more than just act without any thought or doubt.”

If you were thinking that Metro 2033 was just an on-rails shooter about shootin’ monsters and dudes, you were completely wrong. Your mission might be to eradicate a hostile species, but ideally you’ve already begun to question the nobility of that goal, even though as Khan sends Artyom off into hostile terrain, the journey is only beginning.

← Being Tzeentch: Chaos in the Old World
The Walking Dad: A New Day →