In a lot of ways, Indines seems like the ideal tourist destination. It’s bright. Sunny. The people are exotic and vibrant, and have sexy, unfamiliar names like Kallistar Flarechild and Zaamassal Kett. The general populace has long ago gotten used to inter-planar travelers popping into existence left and right, so there’s nary a grouse to be heard about bloody foreigners or damn tourists or anything ugly like that.

It’s so nice, it’s almost easy to forget that there are apparently only two careers in Indines: university professor and punching bag. More often than not, they’re the same job.

END_OF_DOCUMENT_TOKEN_TO_BE_REPLACED

Tags: BattleCON, Board Games, Level 99 Games, The Fruits of Kickstarter, War of Indines 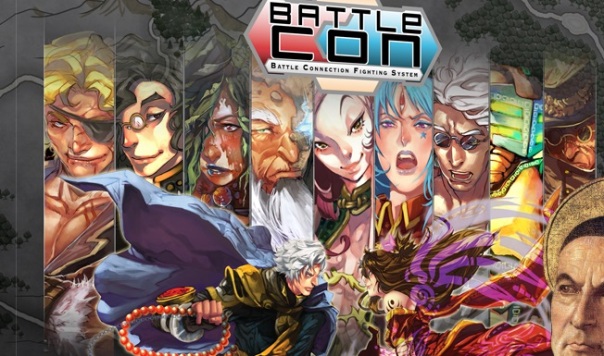 Back in the day, our game group used to hold these little house tournaments all the time. Mostly Summoner Wars, though we could be counted on to make a lively competition out of nearly anything, from Omen: A Reign of War to The Duke. If we could play more than one match at a time, sharing table space and laughing about each other’s flubs, we were set.

Then, for whatever reason, we stopped playing like that.

Over the next year we occasionally discussed giving it another shot. Especially if we could hold a tournament using BattleCON: Devastation of Indines, because a colorful fighting game full of thirty asymmetrical characters, dead simple rules, and outguess-your-opponent gameplay seemed like the perfect sort of thing for a winner-takes-all brawl. Even so, our plans never coalesced into an actual event.

Well. A few weeks back, entirely unexpectedly, we were treated to a perfect situation: exactly eight players, all of whom arrived exactly at 8, nobody who reported needing to get to bed early, and every single one of them ready and willing to play.

END_OF_DOCUMENT_TOKEN_TO_BE_REPLACED

Posted in Board Game, Game Diary

I don’t have much of a history with fighting games. Oh, there was that time up at Rocky Mountain Pizza Company when a pack of older kids kicked me off the Street Fighter machine, and I owned both Power Stone games on Dreamcast (though they were 3D, so they don’t “count”), and I occasionally got roped into enduring a match of Super Smash Bros with my cousin — but other than those isolated instances, fighting games always stood out as a particularly silly genre, and anyway, I was too busy playing games like Baldur’s Gate II and Planescape: Torment. *raises pinkie ever so superiorly*

So when BattleCON: Devastation of Indines appeared on Kickstarter, I wasn’t exactly out of my mind with anticipation. Still, it was by Level 99 Games, and after gems like Pixel Tactics and the Minigame Library, I figured I’d take a chance. That was nearly a year ago, and now that I’ve played through a couple dozen matches, I can tell you exactly how disappointed I am…

END_OF_DOCUMENT_TOKEN_TO_BE_REPLACED

Tags: BattleCON, Board Games, Devastation of Indines, Level 99 Games, The Fruits of Kickstarter