In a lot of ways, Indines seems like the ideal tourist destination. It’s bright. Sunny. The people are exotic and vibrant, and have sexy, unfamiliar names like Kallistar Flarechild and Zaamassal Kett. The general populace has long ago gotten used to inter-planar travelers popping into existence left and right, so there’s nary a grouse to be heard about bloody foreigners or damn tourists or anything ugly like that.

It’s so nice, it’s almost easy to forget that there are apparently only two careers in Indines: university professor and punching bag. More often than not, they’re the same job. 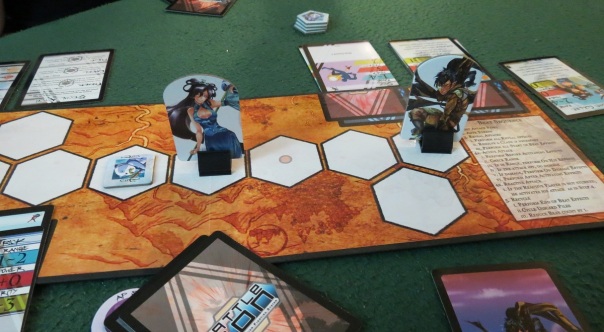 Tatsumi Nuoc (and her panda pal Juto) versus Rukyuk Amberdeen.

For those familiar with the BattleCON brand, tracing the pedigree of War of Indines returns some odd results. To most it will seem like a sequel to the superb Devastation of Indines, which remains one of my favorite two-player games and provided a gripping house tournament earlier this year. However, War is actually Devastation’s predecessor from way back when BattleCON was more obscure, now given a shiny new release that’s polished up, rebalanced, and given even more color and clarity than ever before. It’s also smaller — well, more compact, let’s say, since nothing about these games is “small” — 18 characters instead of the whopping 30 contained in its overflowing sister set. For anyone intimidated by Devastation’s sprawl of game modes and characters, War of Indines is the leaner, easier-to-know cousin who packs just as much punch without taking up quite as much shelf space.

Hm. It’s possible I over-mixed my metaphors. Still, the point stands that War of Indines is the more approachable of the two.

Or maybe you haven’t heard of BattleCON and you need some convincing? Sure, that’s fine. I love talking about these games.

Put simply, each match of War of Indines is a brawl between two fighters with a bunch of unique powers. It’s a visually arresting game, but the first thing you’ll probably notice is the board that shows how far apart its two fighters are standing, sometimes pushed up against each other and other times pretty distant, but always circling, eyes narrowed, trapped together until one of them is knocked out or a set number of rounds have expired. You’ll alternately creep and sprint, pin your opponent into a corner and dart out of reach.

But all that careful spacing, measuring how close or far you are in relation to your opponent, is just the first half of the game. The second is in the cards.

There are two types of cards in War of Indines, bases and styles. Bases are almost entirely shared between characters, providing general-purpose moves that anyone can use. There’s stuff like Strike, which hits hard and makes you more difficult to stun, Drive for barreling forward into a strong-arm punch, and Grasp for grabbing your opponent and tossing him around like a floppy puppet. At a distance you can hurl projectiles with Burst and Shot, the former letting you hop backwards and the second being a bit longer ranged. Then there’s Dash, which lets you hurl yourself out of danger.

These bases provide an option for nearly every circumstance. Enemy hammering you up close? Toss him away with Grasp or dodge with Dash or Burst. Nettling you from afar? Close the gap with Drive. Moving too quickly and stunning your character before you get a chance to punch back? Shrug it off with Strike. Darting out of your reach? Zap him with Shot.

Now, the coolest part is where the “Battle Connection” of BattleCON shows up. See, every round sees you and your opponent putting together a pair of cards, combining those bases with special moves called styles. Every character gets five of these, and when combined with a base card, they create completely unique moves, riffing off each character’s unique powers. A simple Strike, for instance, might become:

Grapnel Strike, the Clockwork Knight Cadenza’s way of dealing enormous damage from afar and then jerking his victim towards him.

Rasping Strike, courtesy of the assassin Heketch. This one is a little weaker than a regular Strike, at least until Heketch spends his Dark Force token to beef it up. Worse, he uses the damage dealt by this attack to heal himself, probably through some really yucky malpractice.

Ignition Strike. This is one of Kallistar Flarechild’s moves, but it’s actually two different moves depending on whether she’s in human or elemental form. Tricky stuff. Suffice to say, if she’s human it will spark her into her more powerful form; if she’s already elemental, then it burns her and her opponent alike.

Exoskeletal Quicksilver Strike. Because Kehrolyn Ross gets to use two styles at a time, she can pair them to even greater effect. Here, she’s both blocking damage and moving super fast.

Okay, so those were just five examples. Remember, there are 18 characters, each with five styles. There’s a reason nobody has ever claimed that a BattleCON game lacked variety.

Each of the fighters makes use of dramatically different abilities.

What’s more, all these moves give rise to some really incredible mental gymnastics. If the board is the first half of the game and the cards are the second, then out-guessing your opponent is the third.

Yes, the third half. I said these were mental gymnastics, didn’t I?

See, War of Indines is one of those games where we’d say the players have “perfect information.” First of all, whenever you use a move, it has to cool down for a couple rounds, sliding across two discard piles before it recycles into your hand. Pull off a perfect move that stuns your opponent, blocks their counterattack and leaves them bleeding, and you can’t use it for a while. Or drop a whiffleball as your mean right hook whistles through the air where your opponent used to be, and you won’t have a chance to plink it in exactly the same way for a couple rounds.

Now, since both players are given a reference that shows all the cards the enemy fighter might use, and since everyone can see the contents of any discard pile at any time, the result is that you’re always aware of every possible move your opponent could make. Even with four of their cards cycling through their discard piles there are plenty to choose from, but chances are they’re going to want to (1) hit you, (2) avoid being hit, or maybe (3) set up a bigger move for a later turn. Armed with those assumptions, what’s your best possible move to counter/block/outrun their move? And what move are they likely to make to counter your strengths?

The result is simply wonderful. On more than one occasion I’ve spent so much mental energy figuring out the perfect move to counter their strengths that when we’ve finally gotten around to revealing our attack pairs, my grin disappeared like a fart on the wind when I realized they were standing just out of range. As in, by one space, the most basic tactical consideration foiled by my own over-analysis.

But for every instance like that (or at least I’d like to think so), the result has been a perfectly executed move, one that totally shreds my opponent’s choice of attack pair, shrugging off the hit before giving back better than I got. Or twice as good, accepting the damage and hitting them with an attack that lets me mirror their attack’s power plus my own. Just because I’m a bastard like that.

War of Indines represents the perfect marriage of tactical positioning, cool card combos, and mental exertion. And I haven’t even had time to really talk about the characters themselves, how different they are, with fighters who manipulate time, slowly level up over the course of a bout, sacrifice their own life in a dark pact for extra power, discard their opponent’s styles, leave traps all over the board, or fight alongside a pesky panda pal.

This game is awesome, from its flashy, stylized aesthetic to its impeccable gameplay, and I would wholeheartedly recommend it to anyone. Never heard of BattleCON? Get it. Loved Devastation? Get it. Found Devastation too intimidating? Get this one, the complexity is toned down.

Posted on June 21, 2015, in Board Game and tagged BattleCON, Board Games, Level 99 Games, The Fruits of Kickstarter, War of Indines. Bookmark the permalink. 4 Comments.